New York Philharmonic A Dancer's Dream Gets Everyone Into The Act


NEW YORK--Everyone got into the act, including orchestra members, conductor and Music Director Alan Gilbert and the audience in A Dancer's Dream, presented by the New York Philharmonic June 27-29.  Set to two works by Russia's Igor Stravinsky (Le Baiser de la fee' (The Fairy's Kiss and Petrushka), and Excerpts from Neige (Snow) for Piano, Four-Hands from France's Louis Durey. The concert was the finale to the New York Philharmonic's regular subscription season.

Designed and Directed by Doug Fitch (Le Grand Macabre, The Cunning Little Vixen, both for New York Philharmonic, the all-encompassing production filled the Avery Fisher Hall stage with dancers, costumed orchestra members, puppets, miniatures and onstage "things," special lighting, video systems and technicians with hand-held video cameras. Whew! Even a costumed Maestrio Gilbert got into an act, standing down from the podium at points to become at first, a sort of mime and then a virtual Svengali, commanding both the orchestra and the audience with mock magical powers.

Principal Dancer Sara Mearns of New York City Ballet, danced the part of the heroine, playing first a child, seemingly overwhelmed by the mountainous winter wonderland that engulfed her, and then as a dancing rag doll in Petrushka, joined by Amar Ramasar, also of City Ballet, who doubled as a Puppeteer. Both were in their New York Philharmonic debut.

At times humorous, with orchestra members, Gilbert and the audience, joining in the fun, the concert also featured some spectacular elements of both classical and acrobat dance by an athletic Mearns and Ramasar combined with some neatly projected dramatic touches, particularly in the early scenes, in which she conveyed an Alice in Wonderland type of childish rapture. The scenery onstage was projected on a giant screen to give the eerie impression of an outsized character  (Mearns)  looking quizzically over the miniaturized mountainscape.

Neige gave full rein to Mearns' considerable dancing prowess, ending with her being dressed like a doll, which sequed perfectly into the final piece, Stravinsky's Petrushka.  which featured  a cacaphony of puppets, film, live and recorded video, placards and orchestra members in costume playing musical chairs while performing Stravinsky's dizzying music. It all climaxed with the audience letting out a previously orchestrated "Scream!" followed by 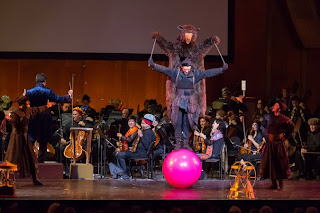 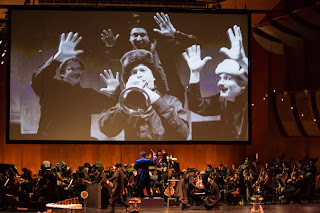 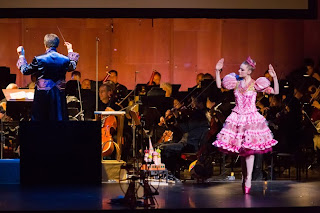 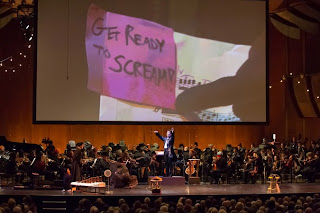 Maestro Gilbert exiting the auditorium with a life-sized ragdoll representation of the lead dancer. It was an oddball program that brought the audience to its feet and made them feel a part of all of the musical and theatrical high jinx!

Audiences nationwide and around the world will have an opportunity to witness this genre-bending season finale concert when it is broadcast to select movie theaters in September. Check local listings for times and tickets or visit nyphil.org.
Posted by Dwight the Connoisseur at 5:30 AM