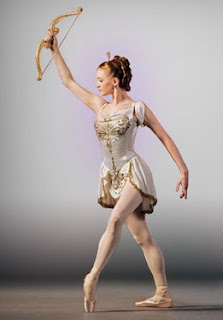 Next production: Sleeping Beauty, now through Saturday, July 6
NEW YORK--American Ballet Theatre's Sylvia at the Metropolitan Opera House, is a stylish, steamy recreation of Frederick Ashton's brilliant production, which saw its World Premiere at the Royal Opera House, Covent Garden in 2004. It is  full-scale classic ballet in every since of the word, with enchanting music by French composer Leo Delibes, best known for his Opera Cpmiques Le Roi l' a dit (1873) and Lakme (1883), Original Designs by Robin and Christopher Ironside (Sylvia for Sadler's Wells Ballet in 1952) and Additional Designs for the Revival by Peter Farmer and Lighting by Mark Jonathan(Cindarella-Royal Ballet, Sylvia-Royal Opera House). With Principal Dancers in the persons of  svelte South Carolina  beauty  Gillian Murphy and fiery Brazilian Marcelo Gomes dancing the title roles, well, how can you miss?
The partnering between Murphy and Gomes was sublime. With her high kicks and deep back bends, Murphy was a marvel to behold. Gome's effortless lifts   seemed to defy gravity. His leaps  suspended him in air for such an interminable amount of time, that one looked for the invisible guy wires. Among the delights of the opening act were the nimble Hunt attendants with their precision moves and a motionless Daniil Simkin as the classic god Eros, who suddenly sprang to life like one of those robotic performers in front of Ripley's in Times Square. Simone Messmer and Thomas Forster, dancing Apollo and Terpsichore were the fitting accent ague to the evening.
The colorful costumes and tightly woven ensemble dancing by the Peasants added to the sense of pageantry and sweeping drama. Orion's concubines added a fitting sultry note to the scene. Conductor David LaMarche and the orchestra made Delibe's timeless score seem vibrant and alive, as if it were composed yesterday.
The rest of the evening was full of enthusiastic dancing to Delibe's time-honored score, with Murphy giving a master class in the solo numbers that were part of the repertoire of every budding ballerina in the audience. For many,  the complex footwork and sense of total ease of movement of Murphy in the famous pizzicato solo in Act III was the real standout showpiece of the entire performance. Delibe's  familiar theme must have brought back memories to anyone who ever took ballet lessons and prompted thoughts of "why couldn't I have done it like that!?" Murphy was superb with her deep back bends, pliant torso twists and intricate footwork. She danced with a sense of freedom and abandonment that was exhilarating. Ms. Murphy was splendid!
ABT's Metropolitan Opera House season draws to a close this weekend with performances of Sleeping Beauty through Saturday, July 6. It's a rare opportunity to see one of the great ballet companies in the world, whose celestial array of international dancers is the envy of any touring ensemble. For those who relish the sheer joy of dancing and Tchaikovsky's enchanting music, watching ABT this weekend is an experience to rival Fourth of July fireworks.
Posted by Dwight the Connoisseur at 2:46 AM