NEW YORK---Only a few performances remain of one of the Metropolitan Opera's most visually stunning, musically satisfying and psychologically probing productions of the season; Borodin's  Prince Igor.

Russian director Dmitri Tcherniakov employs an imaginative set with 12,500 poppies and a cadre of powerhouse singers from Russia, Slovakia, the Ukraine and Georgia to present Borodin's lush operatic masterpiece.

Much of the action in Prince Igor takes place within the mind of the wounded lead character, sung with force and brilliance by Russian bass-baritone Ildar Abdrazakov.  Stark black and white silent-film segments, filmed expressly for the production, visually fill out the running narrative.  Based on a libretto written by Borodin after a 12th century epic poem, the score was incomplete at the point of his untimely death. It was later completed by Russian masters Rimsky-Korsakov and Glazunov.
Additional elements were added for the Met production by director Tcherniakov with conductor  Gianandrea Noseda. A lively approach to the highly complex score brought out its many layers, without allowing it to become ponderous. Thus, the more than four hour production moved along at a rapid pace. The action onstage so absorbed the audience that  time became irrelevant.

In speaking with the Met's own marvelous star bass-baritone Eric Owens, who served as the knowledgable backstage interviewer and host for the Met Live HD presentation, Abdrazakov spoke of the challenges inherent in the demanding role of Prince Igor. After sending greetings to his fellow Russians who were watching the production live in theaters throughout his native land, Abdrazakov expounded. "When I first understudied the role as a young student in Moscow, I was told that this role would, in the future, be my visa card. That turned out to be true, and now I am here singing it at the Met!"

Regarding the more psychological approach taken by director Tcherniakov in the Met production, he told Owens, "In a way, the school prepared me for this role, but when I came here, Dmitri showed me so many more things about it. In rehearsals, we tried many approaches, and many of the different things we worked on, you are seeing here today."

The story of Prince Igor is rooted in Russian lore. Igor is the Russian prince who rules the ancient city of Putivl. He leads his army in a campaign against the nomadic Polovtsians. Yes, those Polovtsians, who are celebrated in the elaborate dance scene in Act I, which features Borodin's lovely theme, to which many in the audience hummed along.  Choreographer Itzik Galili and a corp of extremely nimble dancers imbued the scene with magic.

The dramatic poppy field set, designed by director Tcherniakov, costumes by Elena Zaitseva, lighting by Gleb Filshtinsky and the exceptional black and white footage and other visuals by projection designer S. Katy Tucker, all combined to make this a visually absorbing production. Met Live HD director, TVs legendary Gary Halvorson, brought it all together in a seamless presentation.

Despite the length of the opera, the action proceeds rather quickly. Igor's troops are defeated and he and his son Vladimir, sung by Russian tenor Sergey Semishkur, in his Met debut, are taken captive.

In the interim, Igor has entrusted his wife and his city in the care of his brother-in-law, Prince Galitsky, sung with gusto by Russian bass Mikhail Petrenko, who connives to wrest power from Igor while he is in captivity.

What follows are the scenes which make this production so absolutely riveting. The dream sequencer, supported by the black and white footage,  depicts a wounded Prince Igor communing with his devoted wife, Yaroslavna, sung by Ukrainian soprano Oksana Dyka, in her Met debut. Later scenes reveal her forceful voice with its clear high notes and golden precision.

Other singers similarly acquit themselves. Georgian mezzo-soprano Anita Rachvelishvilil brings sensuality and depth to her role as Konchakovna, the daughter of the Khan, sung by Slovakian bass Stefan Kocan.

For all its early drama, the opera ends on a pensive note, with an escaped Igor returning to his village broken and subdued, to help them rebuild by salvaging the scraps from the ruins. It is symbolic of the challenges ahead. The road to recovery will be long and hard, but with commitment and togetherness, there's hope. In a way, the opera has a life-lesson for us all that is worth seeing and learning from. 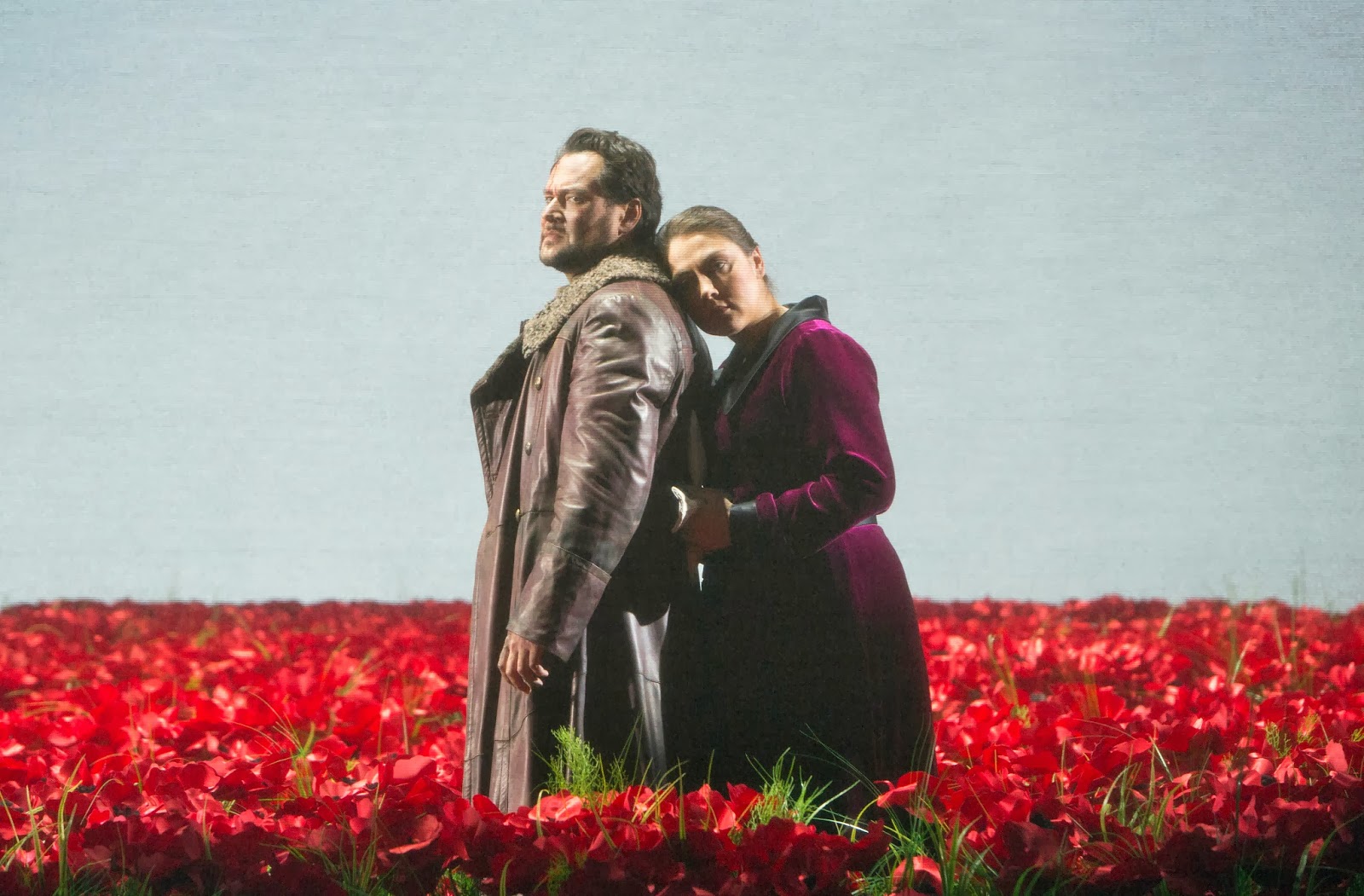 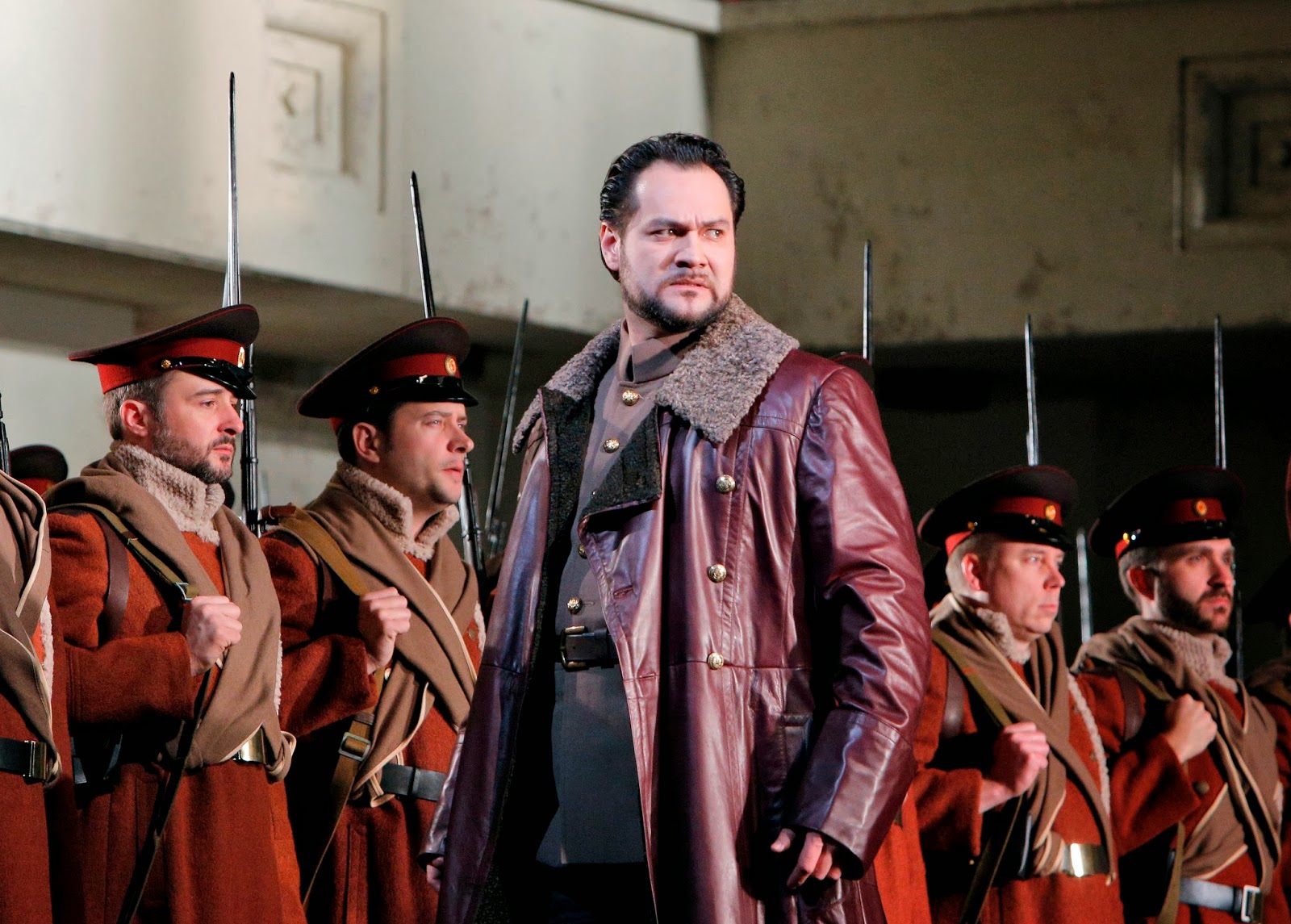 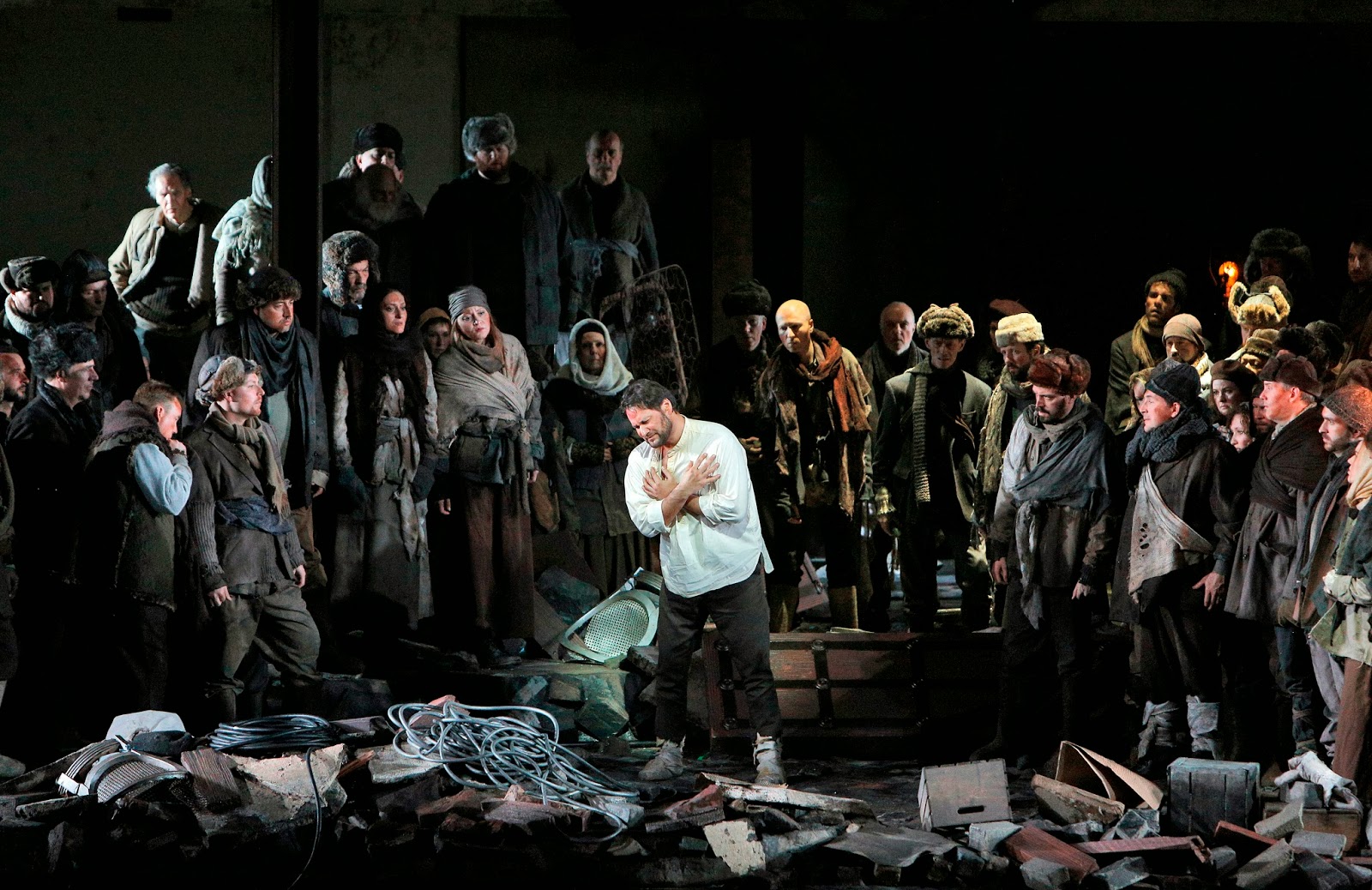 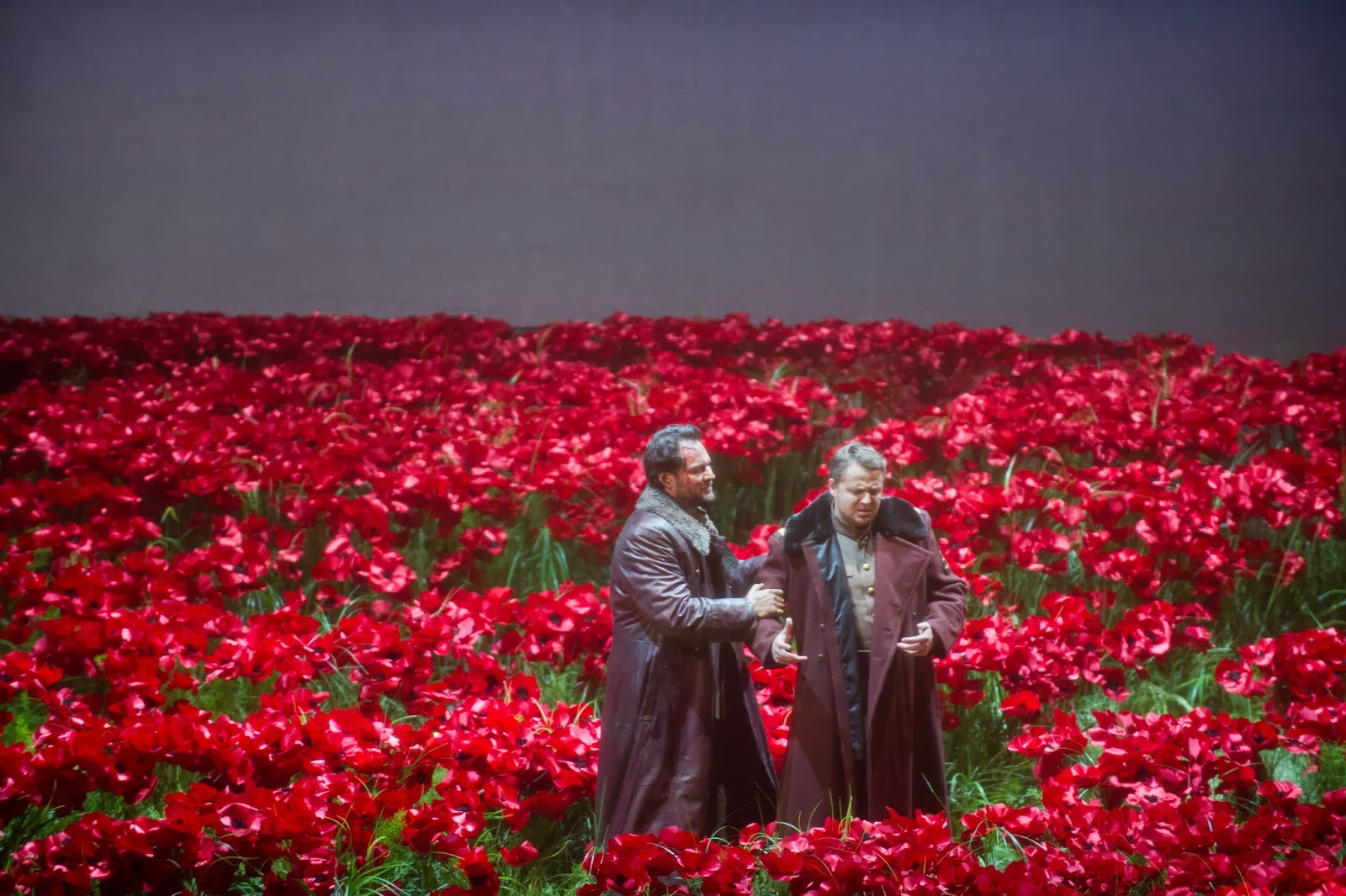 Posted by Dwight the Connoisseur at 6:37 AM