NEW YORK--Of Horses and Men is a stunning cinematic debut for Icelandic stage director Benedikt Erlingsson, who wrote and directed the film. Set against the breathtaking landscape of Iceland's wide-openterritories, the film is a satire that shows the day to day ebb and flow of life, love and death and influence of the elemental force of nature. Life in the isolated villages revolve mainly around the exquisitely beautiful wild Icelandic short-legged horses, which roam freely over the vast prairies and valleys. The horses are rounded up periodically and sold off to the locals, who are left with the dubious task of breaking them into beasts of burden. That construct sets for the irony and biting satire of the film, so brilliantly executed in almost storybook fashion by director Erlingsson. The story is told, sometimes from the point of view of the horses, and sometimes from the point of view of the people who ride them and who think they control them. Bottom line, film reveals how all are equally subject to the forces and whims of life and nature.

The leitmotif that runs throughout the film is the cat and mouse romance developing between a widower and a widow in the township, Played with empathy and vulnerability by Ingvar E. Sigurdsson and Charlotte Boving, the two are, on the surface, meant for each other, but prying eyes of nosy neighbors, who suck the life out of anyone in close proximity by keeping tabs on their every move! No wonder the local town lovely takes such joy in roaming the valleys and capturing the wild horses.

The film opens with the Ingvar character breaking the beautiful white mare that he has coveted. We finally see him proudly riding it, in full formal riding gear, with the horse at a crisp, high-stepping gallop, for all to
see. It is an impressive sight and all the townspeople come out,some the binoculars, to witness the spectacle. It certainly gets the attention of his tentative love interest, played by Boving. A complication quickly sets in. Her wild black stallion has broken loose and has taken a sudden interest in the filly. In perhaps one of the most humorous and indelible sexual scenes to ever hit the screen, the stallion pounces upon the mare, with the Ingvar character forced to sit there in utter humiliation, until the stallion has spent himself. Visually, the image is so powerful, because it almost looks as if the rider is equally as violated as the horse. It is an hilarious scene!

The Ingvar character is humiliated, so much so, that he decides to shoot his prized horse, which he feels has been violated. (Is there a subtle social commentary about the issue of rape, in which women are often vilified, abandoned and even stoned to death, in many cultures, when they are sexually attacked? We'll leave that one for another film.)

I won't tell you more, because you have to see this film to believe it. First of all, it is beautifully shot and directed.  Benedikt Erlingsson is Iceland's most prolific stage director and this is his first film. The Original Score, by David Thor Johnsson is a knockout and the Cinematography by Bergsteinn Bjoergulfsson is breathtaking. The shots of those beautiful wild horses roaming the sweeping countryside are alone worth the price of admission. The Producer of the film, Fridrik Thor Fridriksson, was nominated for an Oscar for his film, Children of Nature in 1991 and Of Horses axnd Men was submitted to the 2014 Academy Awards for Best Foreign Language Film. It's already won a truckload of festival awards over the past year, including Best Director at the Tokyo Film Festival and and the New Directors Award at the San Sebastian Film Festival. 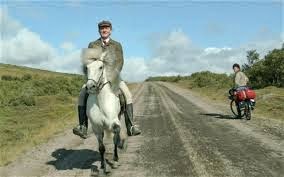 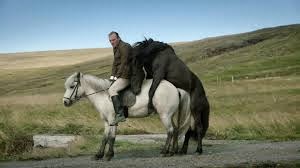 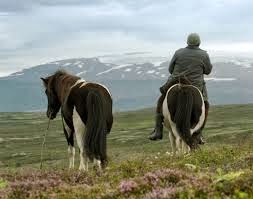 Now in its 43rd year, the renowned New Directors/New Films festival, presented jointly by The Museum of Modern Art and the Film Society of Lincoln Center, introduces New York audiences to the work of emerging or not-yet established filmmakers from around the world. The festival takes place at the Walter Reade Theater at Lincoln Center and at The Roy and Niuta Titus Theater 1 at MoMA. For programming and ticketing information, please visitnewdirectors.org.

Posted by Dwight the Connoisseur at 2:28 PM