"Cesar Chavez" a riveting bio-pic about an unsung hero

Mexican actor and director Diego Luna brings to theaters this weekend a riveting biopic about one of the most important, but largely unsung and overlooked leaders of the twentieth century labor movement. " Cesar Chavez" opens in theaters everywhere Friday, March 28.

Starring Michael Pena ("Crash," "Million Dollar Baby") as the messianic leader of the Mexican American labor union, the United Farm Workers, the film also features the resourceful actress Rosario Dawson as Chavez's longtime organizing partner, Dolores Huerta and America Ferrera ("Ugly Betty,") as his long-suffering, activist wife, Helen. John Malkovich, who was also one of the producers of the film, plays the smarmy, self-righteous head of the giant grape conglomerate who is Chavez's nemesis. In one gripping confrontational scene, it becomes strikingly ironic that the two men are cut from the same cloth as each recounts his struggles and rise through hard work and rugged individualism. The two are more alike than they think, yet circumstances, politics and economics set them at odds.

Chavez was born into a family of migrant workers in 1927 in Yuma, Arizona. The family moved to California's Central Valley in 1938, and, after a stint in the Navy, he developed a friendship with labor organizer Fred Ross that would change his life. Chavez first began voter registration drives, then formed the United Farm Workers Union. He rose to national prominence through a series of national boycotts, hunger strikes and a 340-mile trek from Delano- Bakersfield to the California state capitol that brought international attention to the plight of Mexican farm workers.

Chavez's self-sacrifice, his commitment to non-violence and his activism on behalf of Mexican American workers resulted in benefits and social changes that are still being felt today. Besides improving the lot of workers overall, Chavez also attacked some of the core belief systems within his own community that had proved detrimental to their advancement; machoism and eye-for-an-eye violence. Chavez fought for and encouraged involvement of women in his movement and, reluctantly, let his own wife take a bold and dangerous stand.

Chavez was the direct disciple of Dr. Martin Luther King, Jr. and practiced his code of non-violence to the point of his own detriment. Yet his commitment to social justice and his personal sacrifice are exemplary.

At times, the "bad guy" grape growers and law enforcement officials seem one-dimentional in a ham-fisted imitation of Rod Steiger "In The Heat of the Night," and the violence at times seems almost cartoonish, but the message is clear and Luna and Pena deliver it in fast-paced, no nonsense fashion. 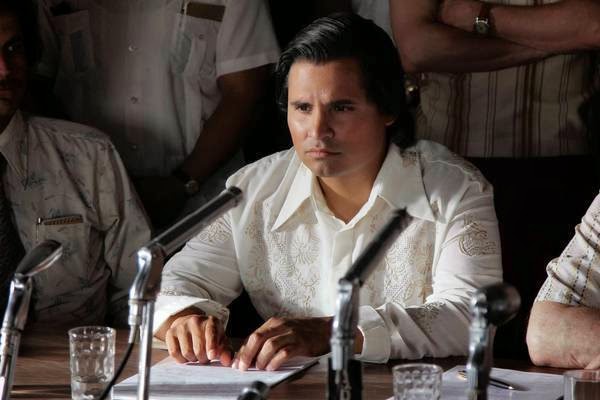 Posted by Dwight the Connoisseur at 5:45 PM