New York--Humanist and director Abderrahman Sissako (Mamako, Waiting for Happiness)  presided over the U.S. Premiere of his French-Mauritanian produced dramatic film "Timbuktu" at the New York Film Festival. The film is currently being screened as part of the Chicago International Film Festival in its Black Perspectives category, October 15 and 16. It is entered in the festival's Main Competition. In a word, Timbuktu is a masterpiece.

The film comes to the United States with considerable pedigree. It was selected to compete fof the Palme d'Or at its World Premiere at the 2014 Cannes Film Festival. At Cannes, it won the Prize of the Ecumenical Jury and the Francois Chalais Prize. It has been selected as the Mauritanian entry for the Best Foreign Language Film at the 87th Academy Awards. Judging from the reactions at the recent screenings in Lincoln Center at the New York Film Festival, the film has a strong possibility of winning.

The very word Timbuktu conjures exotic images of North African fantasy and legend which has been reinforced in films, novels, and even Broadway musicals. In Sissako's artfully crafted drama, the tragedy beneath its glittering history is revealed with stunning clarity. The peace and cultural and religious harmony of this idyllic north African oasis is suddenly shattered by the arrival of jihadist militia. "They literally hijacked the place," Sissako declared in a New York Film Festival appearance.

The film was inspired by the public stoning of a young, unmarried couple in the town of Aguelhok, near Timbuktu. It centers on the brief occupation of Timbuktu by jihadist Islamic fundamentalists. Instead of approaching the subject with sweeping epic scenes involving massive armies and political leaders, the film takes an almost microscopic look at the impact of the takeover and its effect on the  lives of the region's most ordinary people; the nomadic herdsmen who live in tents on the outskirts of town, a lone fisherman whose preoccupation is the protection of his fishing nets, the women fishmongers and shopkeepers who become targets of the fundamentalist's scorn against uppity women.


Sissako, wth his collaborator, cinematographer Sofian El Fani, who lit up the screen with last year's Palm d'Or Cannes Film Festival Winner and Official Selection at the 2013 New York Film Festival, "Blue Is The Warmest Color," contrasts the bright yellow light and swirling sands of the south-east Mauritanian villages of Oualata and Nema, where the film was shot, with the draconian tactics of the jihadists, who are threatening to drive the thriving local culture back into the Middle Ages. El Fani creates scenes that are at once idyllic and terrifying. Many scenes are filmed from the vantage point of a long lens, with few, if any edits, The effect absorbs the viewer in the scene and forces them to focus on the action. One scene, in particular, is quite pointed in its depiction of the impredictability of life and death in this newly harsh environment. The camera is frozen in a wide shot of the lake where the local fisherman has his nets. Kidane accuses the fisherman of killing his prized cow. There's an altercation that ends tragically. The result, seen from afar, depicts  an artful, almost macabre ballet of life and death. It is at once horrifying and exquisite.


"Timbuktu is a symbol," Sissako said at a post-screening news conference at the Walter Reade Theater in Lincoln Center. "This was truly the world's first multi-cultural society. It is the home of the world's first university and a place, until recently, where all of the worlds religions lived together in peace and harmony. Timbuktu is not only a multi-cultural, but a multi-lingual society, and you hear that throughout the film." Scenes are filmed in Arabic, French, English and the local Tamashek languages. There's one tragically comic scene in which one of the jihad soldiers is frantically radioing the details of a tragic incident to his base commader in fractured Arabic. Finally, the frustrated base commander yells at him "Just speak in English man, I can't understand a word you're saying!"


The scene highlights the further absurdity of the occupation. None of the jihadists speaks the local lingo, so all communications have to be translated from Arabic to French and then into English for anyone to be understood. It's insult added to injury.

The film is filled with contrasts. The long-flowing dresses and headwraps of the women and occassional caravans of camels and sights of herds of cattle are punctuated by the use of cell phones, gleaming motorbikes and the ominous presence of military trucks and high-powered rifles. It is a juxtaposition that jarringly places the story in the present and a reminder of  the imminent danger that lurks beneath the idyllic scenes.

As the film unfolds, we see the gradual unraveling of the everday peace of this tiny village.  Each day, there's a new restriction. First, a curfew. Then an edict that no music be played in private homes. A couple caught partying with friends is later stoned to death.  The youth are ordered to stop playing soccer.  Although their ball has been taken from them, the young boys play in mime, without a ball, in protest. Smoking is also banned, but the ban is regularly abused, even by the jihad's very own.

The edicts finally go from the sublime to the ridiculous with the latest ban having to do with "any old thing in a public place." Many of the locals decide they've sufferd the last straw. A cadre of militants stormtrooping through the local mosque during prayer even prompts the otherwise peace-keeping and largely silent Imam (played with restrained anger  by Adel Mahmoud Cherif) to protest by attempting to reason with the rabidly dogmatic loyalists. His words fall on deaf ears, much to his chagrin.

"The women are the ones who truly resist," Sissako affirmed. "The men do nothing to fight back. In fact, they acquiesse!" We see a scene, early in the film, where a woman fishmonger refuses to cover her hands with gloves as ordered by the jihad military. She defiantly thrusts our her hands, telling them she would rather they cut them off than have to wear their gloves in the sweltering heat. She's then led off to prison.

A young woman, sentenced to forty lashes in public for  defying the ban on music sings as her tears flow from each tortuous blow. The scene is movingly portrayed by Malian singer, actress and composer Fatoumata Diawara. One is reminded of the scene in Steve McQueen's Oscar-winning "12 Years A Slave," in which the female protagnonist is almost whipped to death. Similarly, the scene is hard to watch and makes you flinch.  By contrast, a man ordered to take off his long Western-styled pants, storms off, ripping them off in frustration. He is obviously agitated, but acquiesces, even in the throes of outrage.

All of the actors in the film are locals or amatuers gleqned from the local population. The most engaging is Toya, the daughter of the local herdsman Kidane (Ibrahim Ahmed) and his wife Satima (Toulou Kiki), who refuse to leave their traditional tent on the outskirts of town, even though all of their neighbors have long fled the encroaching jihadist invasion. There's their precious 12 year old daughter Toya, played by amateur actress Layla Walter Mohamed (more on her presently) and finally, the fourth member of the family, Issa (played with disarming charm and heart-tugging innocence by Mehdi AG Mohamed) , an orphaned boy who tends the Kidane's small herd of  eight cattle.

"There was this young girl who kept popping up in front of me, no matter where I went to hold open auditions. Finally, I said, 'Okay! You can be in the film. The part had been written for a three year old girl as the daughter. I asked how old she was. She said she was twelve. So, you can imagine what I did. I changed the script." The amatuer child actress, Layla Walet Mohamed actually becomes the heart and soul of the film as a reflection of hope for Africa's future.

There's a scene that opens the film, depicting a young gazelle being pursued by the jihad military. They fire their weapons repeatedly at the animal, frightening it into further flight. "Don't kill it, only frighten it," the commander yells. This scene symbolizes the treatment of the local townspeople by the insurgents. They  rule by fear. The threat of death is their weapon of choice against the innocent.

There are some touching and powerful performances at many key points, particularly by Haitian actress and dancer Kettly Noel as the local madfwoman, who ridicules the baddies in her Medusa-like riddles and confounds them with her voodoo dolls and wild incantations. A particularly inspired scenes shows a native man dancing trance-like around one of her amulets. It is at once celebratory and elegiac.

Sissako not only imbues his local townspeople with dignity, but he also allows his villians to  display an element of human frailty. We see an aggressive lieutenant, Abdelkrim ( played with a complex mix of humanity and gruff masculinity reminiscent of Victor Mature or Robert Mitchum by Abel Jafri),  who is caught by his fellow officer sneaking off to smoke in spite of the very clear ban against it. His compatriot vows not to expose him out of a begrudging loyalty. ""Don't worry," he says. "I won't expose you."
Hichem Yacoubi (A Prophet, 2009, Munich, 2005 and Azur and Asmar: The Prince's Quest) plays the jihadist sidekick with just the right amount of tongue-in-cheek irony.

The film alternates between moments of excruciating beauty and abject horror; humor and sadness, earthly and spiritual pleasure and the most unimaginable pain. It's hard to watch this film and not be moved. In fact, it is reported that the director himself, began sobbing while talking about the film at the Cannes festival news conference. Aided by the evocative score by Amine Bouhafa, the film not only bares on its sleeve the heart of a wounded people, but the soul of a director as an artist.

"Timbuktu" screens as part of Black Perspectives at the Chicago Film Festival October 15  at 8:15pm and 16 at 8pm. Actor Hichem Yacoubi is scheduled to attend.  For tickets and information, visit chicagofilmfestival.com. The U.S. theatrical release for "Timbuktu" is January 28.
COHEN MEDIA GROUP PRESENTS "TIMBUKTU" 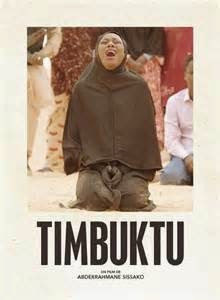 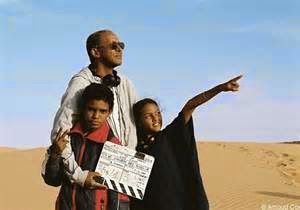 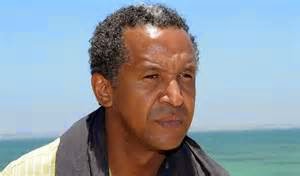 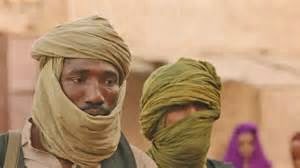 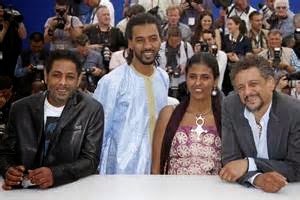 The cast at the Cannes Film Festival 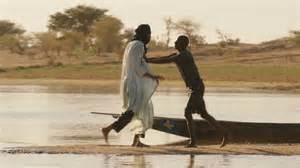 Scenes from the film 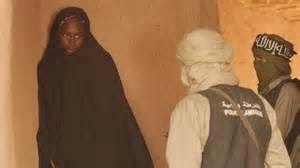 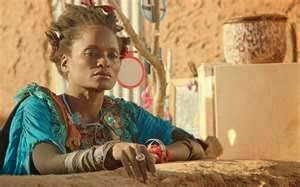 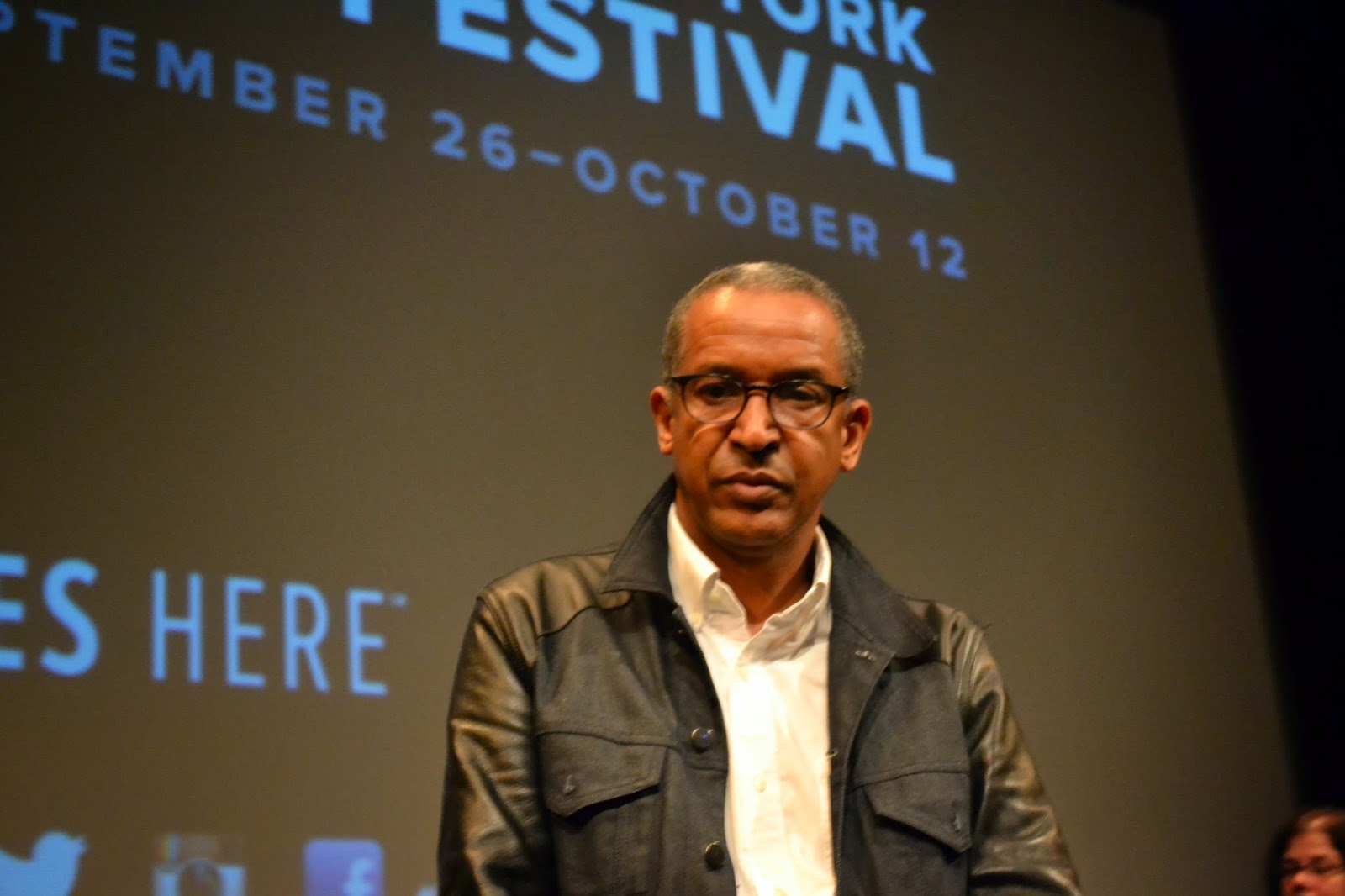 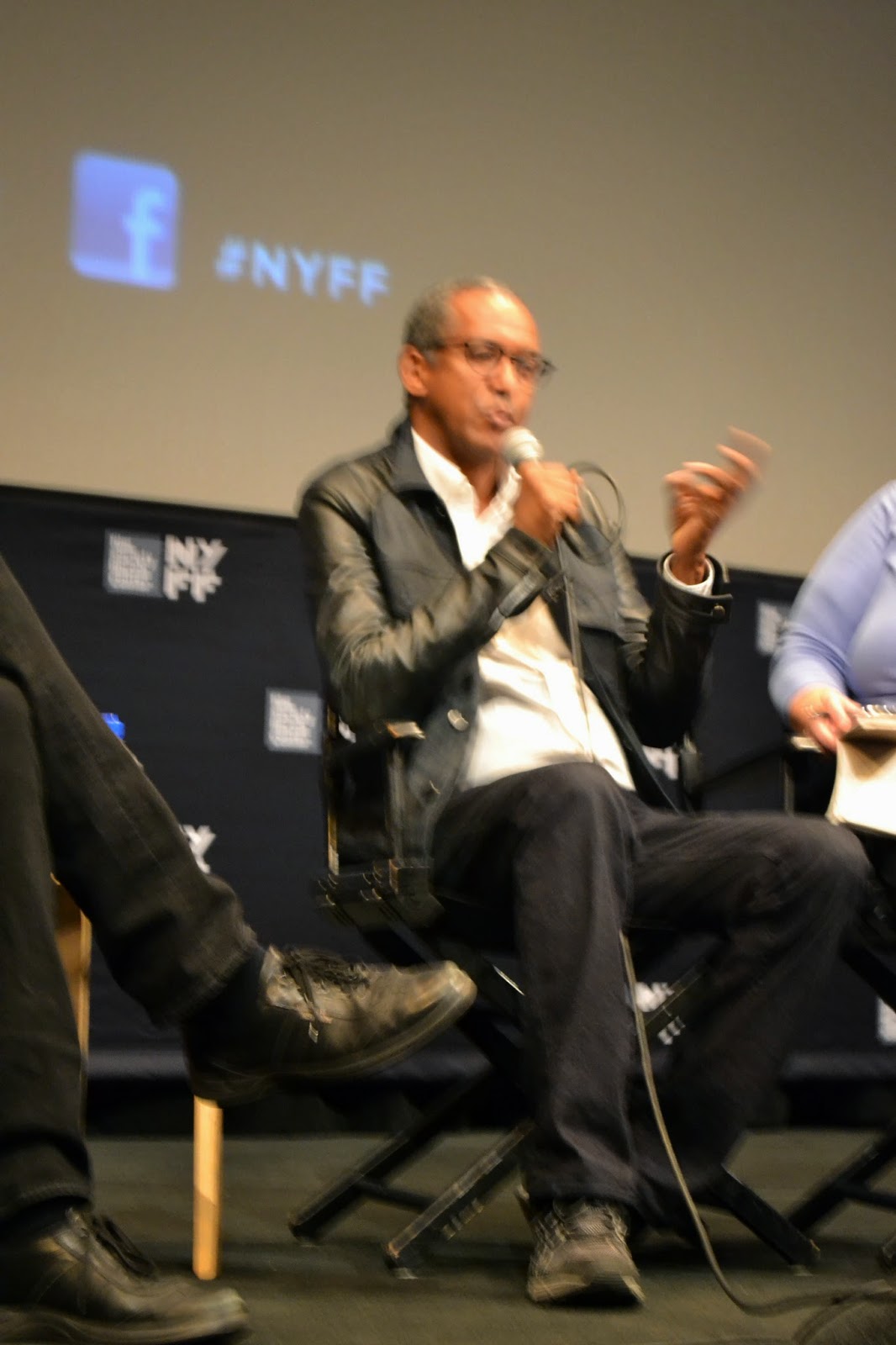 Siassako, who speaks only French, spoke emotionally through an interpreter at the news conference 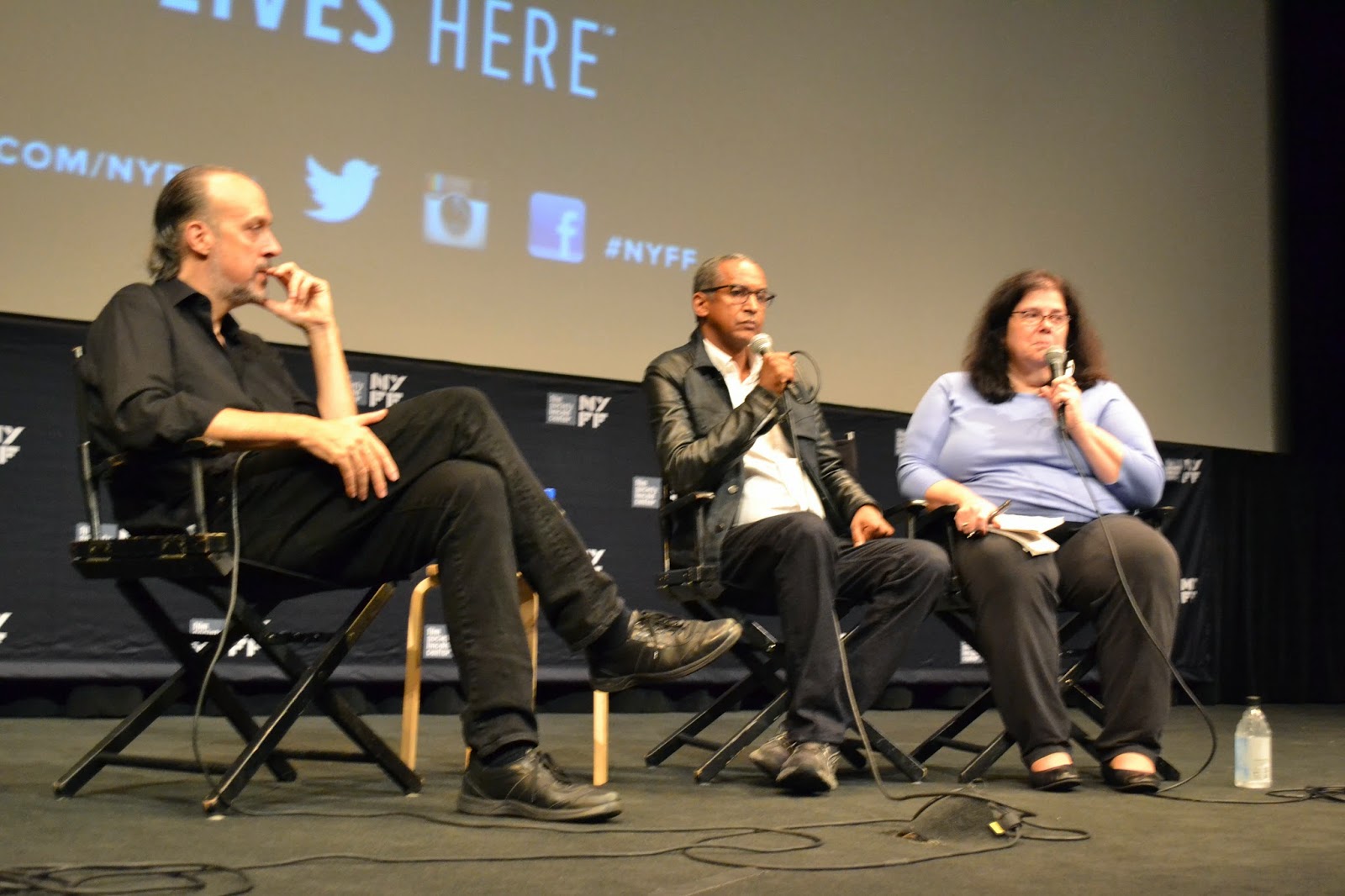 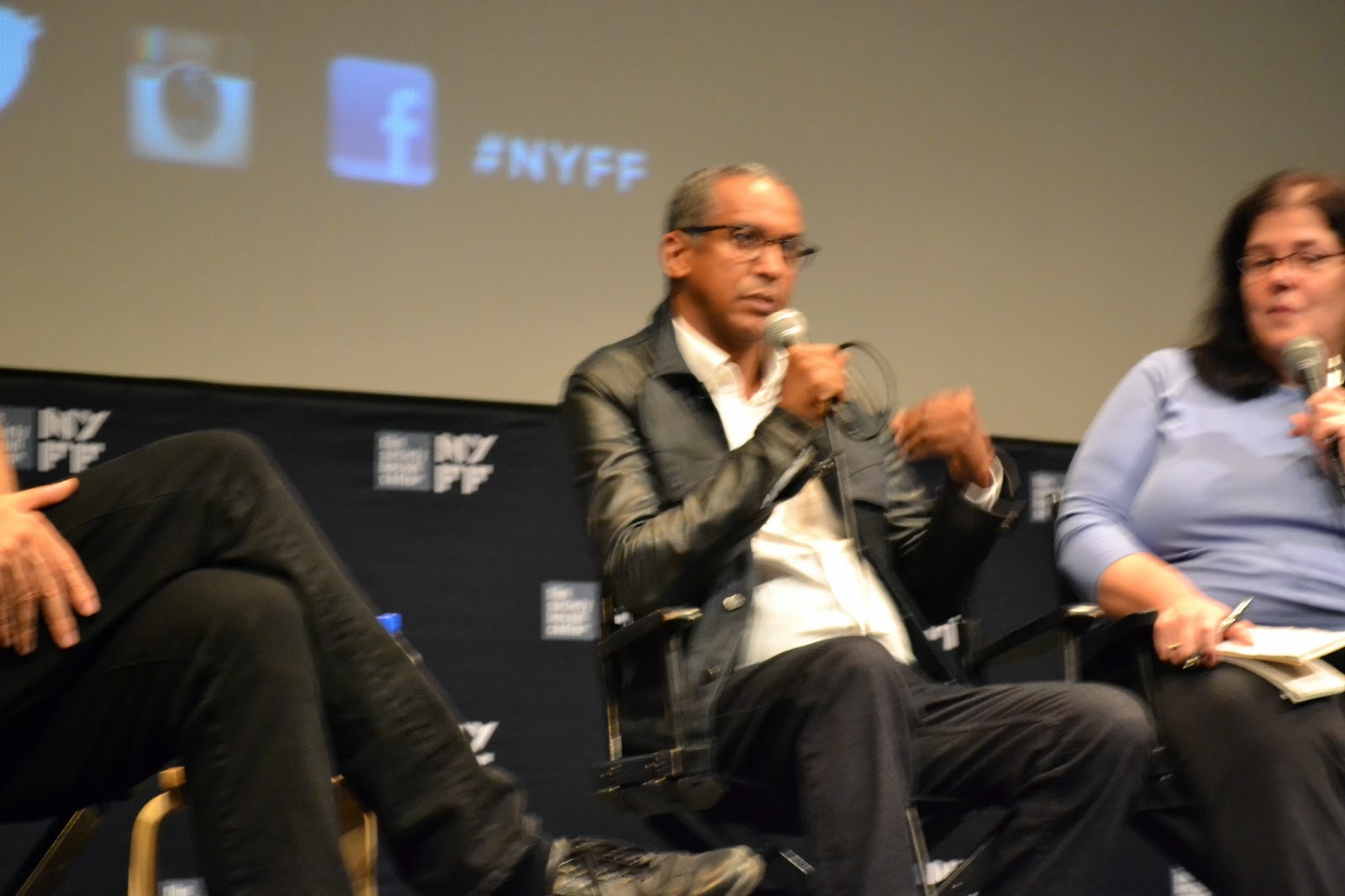 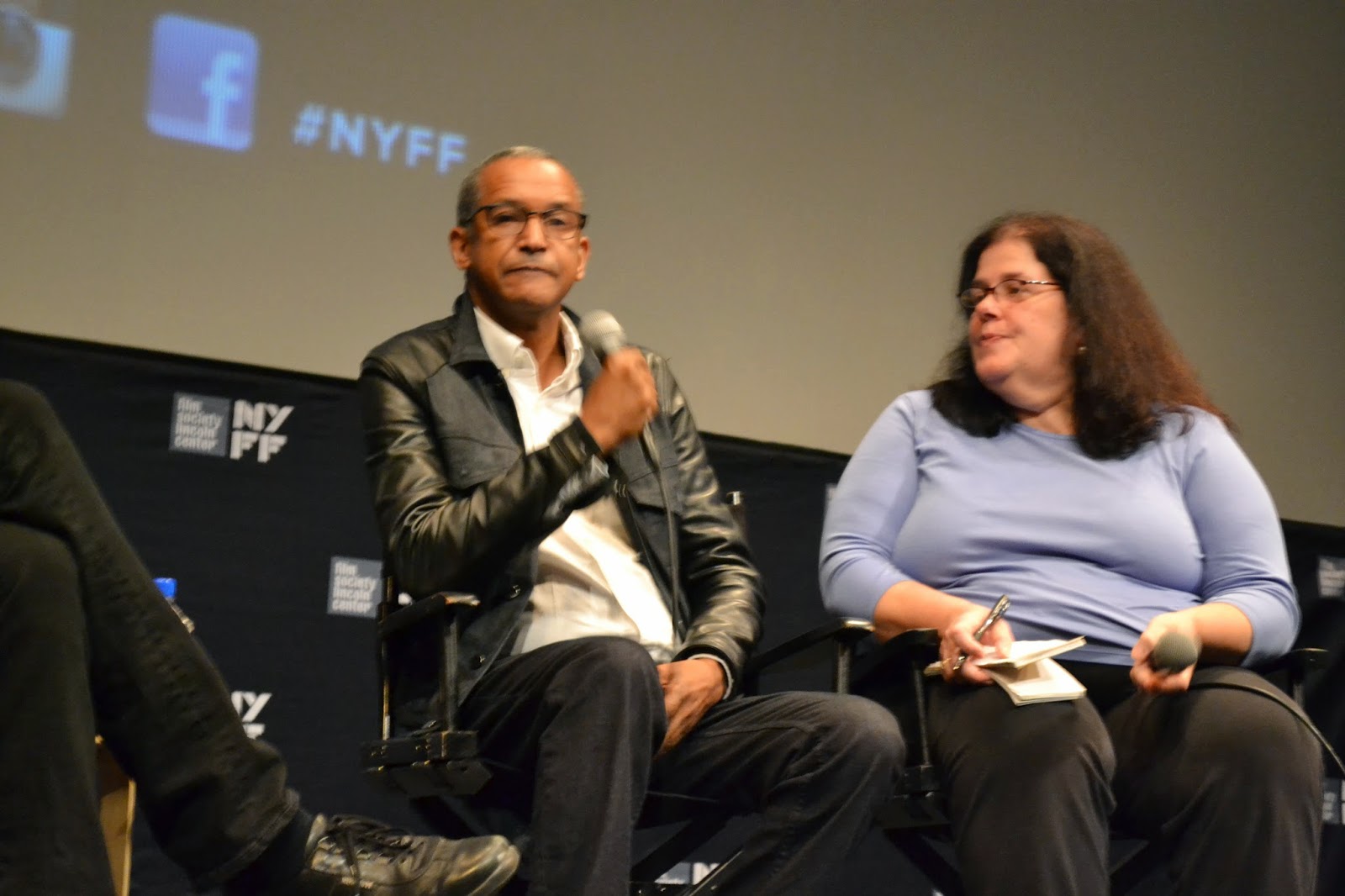 Posted by Dwight the Connoisseur at 1:06 PM