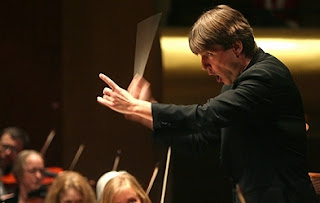 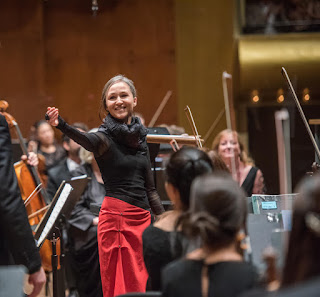 The New York Philharmonic gave one of the most satisfying concrerts of the current subscription season with guest conductor and favored orchestral collaborator Esa-Pekka Salonen at the podium. With a searing performance of Beethoven's Piano Concerto No. 3 in C minor by towering young pianist Benjamin Grosvenor, bookened by the World Premiere of the 2017 New York Philharmonic Commission by the petite and soft-spoken composer Anna Thorvaldsdottir and a fiery performance of Beethoven's Symphony No. 2 in E-flat major, Sinfonia eroica, the evening expressed the very definition of excellent programming.

Iceland is perhaps the smallest of all of the Nordic countries, but it is a relative giant in terms of the amount of musical talent that flows from its frigid shores. There are about 80 musical schools in this country of barely 33,000 residents.A virtually tuition-free system  ensures that students have access to music education beginning at the age of six. An impressive number of composers and performers have staked a prominent presence on the international stage. Among them is the young composer Anna Thorvaldsdottir, who was named the New York Philharmonic's Kravis Emerging Composer in 2015, and who was commissioned in 2017 to create the orchestra society's 198th commission, Metacosmos.

The work totally belies the composers angelic, petite appearance. Though only 12 minutes in length, the work is structured from a framework that acts as an ecosystem of materials that are carried from one performer and one section of the orchestra to another in a series of textures, harmonies, phrases and lyrical lines. The composer described the experience; "When you see a long sustained pitch, think of it as a fragile flower that you need to carry in your hands and walk the distance of a thin rope without dropping it." That, in a nutshell, is the sum and substance of Metacosmos.

British pianist Benjamin Grosvenor's imagining of Beethoven's Piano Concerto No. 3, was the polar opposite of the preceding piece. Big and brash with sweeping glissandos and cascading chord progressions, this was the Voice of the Master, thundering across the ages. At just 25 years old, Grosvenor is one of the most accomplished solo pianists currently on the concert stage. Close your eyes and you'd swear you were listening to someone far more advanced in years, so sensitive and self-aware is his playing style. His depth of understanding of the music and his careful execution on the keyboard is astonishing. Even when using the pedal, each note is clar and distinct with dynamic expressions moving rapidly from one mood to the next with seamless clarity. Beethoven himself considered this his most mature work for piano and marked his ascendency to the pinnacle of virtuosos in Vienna. Grosvenor's interpretation captured the majesty and glory of his work to perfection.

Esa-Pekka Salonen is one of the most exciting conductors to watch. His conducting style consistently finds the cellular rhythmic core of a piece and extrapolates it to its most logical extension. Thus, he and the orchestra found in Beethoven's Eroica a new dynamic tension.It was a heart-pounding performance that caused the blood to race right through the explosive ending. Beethoven had orginally intended the piece as a tribute to Bonaparte. His later disillusionment led him to re-write the title page and rename it Sinfonia eroica. The work became a metaphor to Beethoven's life and his personal view of famous leaders who often fail to iive up to idealized expectations. Untethered from its grounding in the image of Napoleon, the eroica stands as searing commentary of the events taking shape today. As shaped by conductor Salonen and the New York Philharmonic, the work sounded as relevant today as it perhaps did at its inaugural performance.

Posted by Dwight the Connoisseur at 9:04 AM