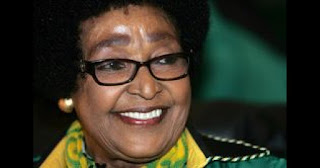 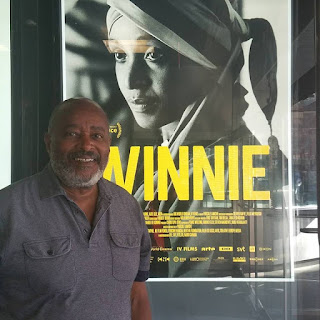 Dwight Cashmere at the S.W.A.N. Day screening at SVA Complex in Chelsea 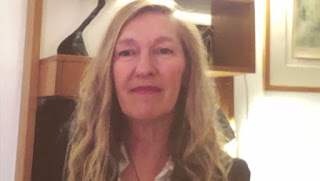 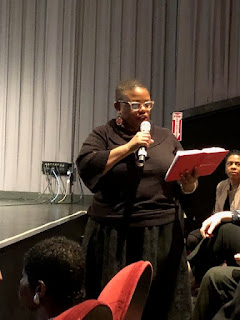 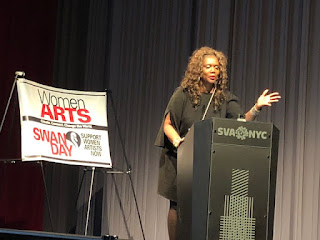 NEW YORK-The announcement that the "Mother of South Africa." Winnie Mandela has died at 81 comes just days after her legacy was honored with the screening of the Sundance Best Director Award winning documentary "Winnie"as the final day event of the Women in the Arts and Media Coalition film festival at SVA Center on S.W.A.N.  (Supporting Women in the Arts Now) Day.

Presented by ImageNation, Founder and Executive Director Moikgantsi Kgama and AAWIC Film Festival Founder Terra Renee introduced the film and a post-screening discussion with the director, Pascale Lamche via SKYPE from her home in France.

"The U.S. was given a very sanitized version of the transition of power to Nelson Mandela," Lamche told the audience, " and a rather confusing and conflicted portrait of  Winnie Mandela, which either presented her as a saint or drug her down to the level of sinner in the days after the fall of apartheid," Instead, the film gives a rather complex and nuanced portrayal of the actual events that surrounded Nelson Mandela's incarceration, and the concurrent movement, led by Winnie Mandela, that kept her husband's memory, legacy and cause alive and which led to the firestorm that swept him into power. Her thanks was a humiliating public trial for sedition, which was played out in cringe-inducing detail in the film. Chief among those who betrayed her was her closest friend, Bishop Desmond Tutu, an act which elicited both tears and the subsequent ire of Winnie Mandela. The vicious attacks led by her enemies and the subterfuge of the ANC are all explored in depth in the film.

Winnie Mandele's march into the pages of  history began with her assertive and single-handed resurrection of the anti-apartheid movement.  "The whole objective of the government was to put her husband away so that people would forget about him," Winnie says in the documentary.  We see her leading countless demonstrations, proudly raising her fist in defiance, while crowds cheered her on. Her efforts were later transposed across the globe,  creating the international pressure cooker that sprung his eventual release from prison after 27 years.

The victory did not come without a price, both personally and politically. By the time of Nelson Mandela's ascendency to the presidency of South Africa, their marriage was on tatters. Subsequently, the efforts by the ANC, the party for which she sacrificed her personal life, the well-being of her family and her own personal safety and security, abandoned her and made her the object of a smear campaign that had seismic repercussions.

Winnie Mandela herself spent time in jail for her alleged acts of sedition in the early days of the struggle. Her experience was recounted in the biography 491 Days; prisoner 132369, which was the basis for Lamche's documentary.

It is not a pretty picture, but one that bares the blemishes, scars, and soul of a dedicated warrior who put the welfare of her country and her people above all else. "It was difficult," Winnie says of her marriage to Mandela. "You have to understand that after we were married, we were only really together for a few months. After that, the entire relationship was carried out through letters and through visits through bars. At times I felt terrible guilt because of my children. They suffered because it was a choice between them and the survival of the nation."

"Winnie" is the portrait of a woman of great strength who forged a path to freedom, head bloodied but unbowed. Her efforts led to eventual victory and to an exalted place in the firmament of stars bearing the names of the great leaders of out time.

Posted by Dwight the Connoisseur at 10:41 AM