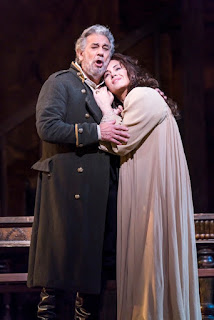 Placido Domingo as the father, Miller, and Sonya Yoncheva as his daughter in the title role
Photos: Chris Lee/Met Opera

Placido Domingo is the sole reason to see the Metropolitan Opera's current production of Verdi's Luisa Miller. At 77 years old, the famed tenor-turned-baritone is taking on a new role as the father, Miller, his 149th role at the Met.  There are moments when his performance is mesmerizing, even transcendent, as he portrays a father torn by the anguish of familial love and its struggle against social conventions and class restrictions.

Luisa Miller is considered one of Verdi's transitional works, moving from his early Rossini-influenced operas, to a middle period, which produced many of the staples of opera repertoire today. Luisa, sung brilliantly by Sonya Yoncheva, is in love with a young man named Carlo, who is, in fact, Rodolfo (the terrific Czech tenor and Met favorite  Piotr Beczala). Her father, Miller, sung by Domingo, is skeptical. Rodolfo is the son of the local lord, Count Walter  (Alexander Vinogradov in his Met Debut). Walter's hired gun, appropriately named Wurm,  has his own designs on Luisa and sets the wheels in motion to end the relationship.

The plot is very predictable and by the end of the first act, the tragic ending is all too apparent. What makes this opera work is the superb singing and the dramatic flourishes, particularly from Domingo and Yoncheva. Domingo is a powerful presence on stage. In combination with Yoncheva full throttle vocal powers, the effect is mesmerizing. There are some terrific duets and more than a few brilliant moments, both dramatically and vocally in this Luisa Miller. The opera hasn't been done at the Met in the decade. Perhaps that's to its benefit, as audiences will be able to look at this performance with fresh eyes and appreciate its dazzling properties. There's a matinee Saturday, April 14 at 12:30pm, followed by performances Weds., April 18 at 7:30pm (with Luca Salsi as Miller) and a final matinee performance  at noon Saturday, April 21. Visit metopera.org for more information. 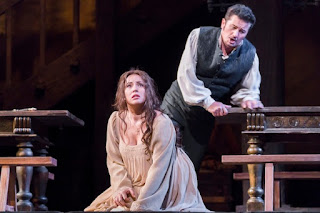 Sonya Yoncheva ass Luisa Miller with Piotr Beczala as her lover Rodolfo
Posted by Dwight the Connoisseur at 6:18 AM