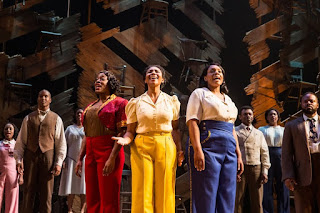 ADRIANNA HICKS AS CELIE (CENTER IN YELLOW PANTS, AND BELOW) LEADS AN ALL-STAR CAST IN THE BROADWAY IN CHICAGO REVIVAL OF THE COLOR PURPLE 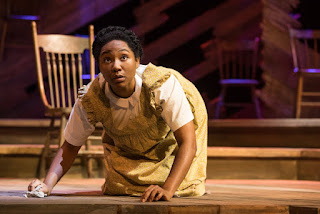 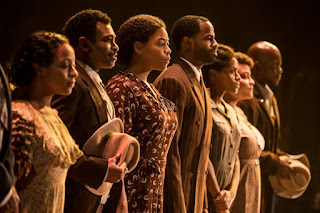 The Broadway in Chicago revival of the double Tony Award-winning musical(2016 Best Musical Revival), The Color Purple, now in a limited two-week run at Chicago's Auditorium Theatre of Roosevelt University (50 E. Congress) now through July 29, is just as powerful and relevant today as it was in its debut, particularly in light of the current #metoo movement.

Few can forget the powerful impact of Stephen Spielberg's film adaptation of Alice Walker Pulitzer Prize-winning 1982 novel, The Color Purple, starring Danny Glover, Whoopi Goldberg and Oprah Winfrey. The film earned 11 Oscar nominations, including a Best Actress nod to Whoopi in her maiden voyage before the cameras and a Best Supporting bid for Oprah, also in her first major film outing.

The film was notable, not only for the fact that it was Spielberg's first attempt at a film that was not in his normal summer blockbuster mode (and not scored by the ubiquitous John Williams), but it was also notable for its bold, in-your-face, exploration of subjects considered anathema in a general audience film, be it black-oriented or otherwise; rape, incest, spousal abuse, misogyny, homosexuality, to name just a few. Yet,what emerges is a story that celebrates the human spirit and its eventual triumph against all odds.

With a book by Marsha Norman and music and lyrics by Grammy-nominated songwriting legend Brenda Russell (Piano In The Dark, If Only For One Night, Get Here), Allee Willis (Grammy-winner, Beverly Hills Cop soundtrack) and Stephen Bray (the original production of Color Purple in 2005, producer and songwriter for Madonna, Gladys Knight and Kylie Minogue) and directed by the Tony Award-winning director of the original production and Sweeney Todd. John Doyle, the revival of The Color Purple is the summer's must-see stage production.

The superlative touring cast led by the original cast members from the 2016 Broadway revival, including Adrianna Hicks as Celie, Carla R. Stewart as Shug Avery and Carrie Compere as Sofia, are joined by the electrifying Gavin Gregory in the pivotal role of Mister, N'Jameh Camara as Celie's long-lost sister Nettie, a major plot point role, and J. Daughtry as Harpo.

The performances and the singing are top-drawer in every way, particularly the sex-charged dance number from Carla R. Stewart as Shug, the powerful soliloquy from Gavin Gregory as Mister which reached the proportion of an operatic aria, and of, course, Adrianna Hicks who took the audience on an unforgettable journey of self-discovery as Celie.

There were only a couple of annoying distractions that marred an otherwise flawless production; the inexplicable clatter of footsteps form the ensemble cast on the floorboards as it emerged onstage during several of the musical's most poignant ballads and the monotonous backdrop of floor to rafter broken wood panels with towering rows of elevated chairs, which seemed meaningless once the story progressed. An maginative use of lighting and perhaps some projected visual backdrops might have better served this production and freshened it up for today's multi-media savvy audience.

These are mere quibbles considering the solid, soul-stirring performances throughout the evening. I left the theatre feeling hopeful, energized and emotionally rejuvenated.

For tickets and information visit BroadwayInChicago.com. 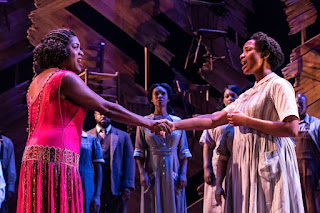 Carla R. Stewart (l) as Shug Avery and Adrianna Hicks as Celie, declare their love for each other 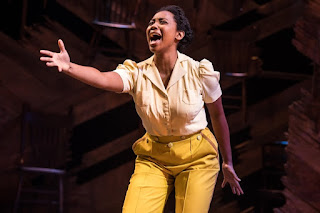 Adrianna Hicks as Celie in a powerful moment 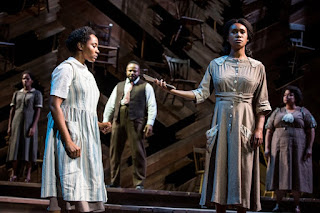 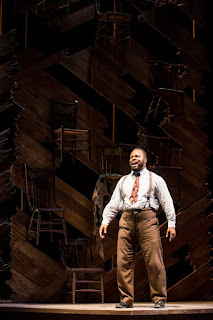 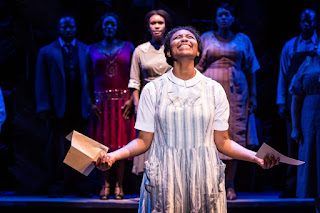 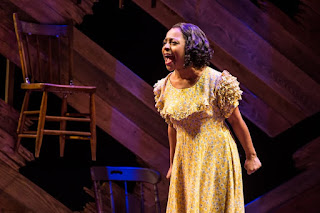 Erica Durham asserts herself against male dominance as Squeak 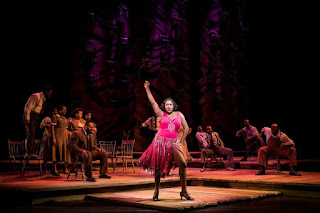 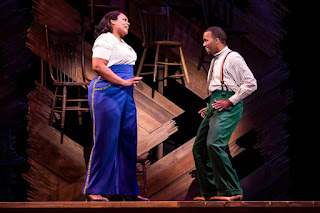 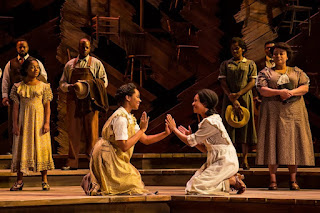 Posted by Dwight the Connoisseur at 4:45 PM