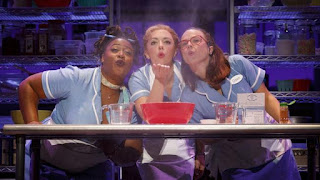 As heartwarming as a generous slice of Apple Pie and as soul-satisfying and easy-to-digest as a hunk of Lemon Meringue, the musical Waitress, now through July 22 at the Cadillac Palace is a delightful mix of stagecraft and musical alchemy that joyfully explores the triumph of the human spirit over seemingly insurmountable adversity.

As effervescent Desi Oakley (Broadway's Wicked Les Miserables, Annie) portrays the indefatigable waitress and would-be national pie contest contestant with her quirky recipes for "My Husband Is A Jerk" Chicken Pot Pie and Betrayed By My Eggs, among others, she hopes to somehow extricate herself from her abusive marriage and the confines of a small town roadside diner through sheer will and true grit and a super-imaginative set of recipes. The entire enterprise is moved swiftly along by an imaginative book Jessie Nelson and music and  lyrics by Sara Bareilles and directed by Diane Paulus. With a whimsical set by Scott Pask and an on-stage band with Conductor/Pianist Nadia DiGiallonardo at the helm which at times telegraphs the emotional underpinnings of the scenes, the production goes down as easily as a slice of Chocolate Chiffon. Based on the late Adrienne Shelly's 2007 film of the same name, the musical was heralded as Broadway's first with an all-female creative team. The biting subject matter, tempered with a healthy dose of heart-warming sentiment is a recipe that others would be wise to follow for a truly great evening of theatre.

Jenna's desire to enter an upcoming national pie contest with a $20,000 prize that will spring her from the clutches of her abusive husband Earl, played with unabashed bravado by Nick Bailey (Broadway's Casa Valentina, Off-Broadway's Hit The Wall). He delivers the evening's most heartfelt ballad "You Will Still Be Mine." The whole thing  is compounded by the fact that she's pregnant, the result of a drunken night of passion.

Jenna's aspirations are bolstered by the emotional support of a gutsy pair of co-workers Becky, sung by Charity Angel Dawson, who originated the role in Cambridge, and Dawn (Lenne Klingaman) and a too-cool-for-himself line cook Cal, played with terrific comedic timing by Ryan G. Dunkin (The Buddy Holly Story, Cheers:Live On Stage National Tours). Perhaps the single most animated and hilarious character, with his angular balletic moves, is the character Ogie (Jeremy Morse-American Rep Waitress) who lends his bad impromptu poetry and love of Revolutionary War re-enactments to the heady mix.

Bryan Fenkart (Broadway's Memphis) is her uneasy love interest, her gynecologist, Dr. Pomatter, who has all the warmth of a cold metal medical probe. Broadway veteran and Helen Hayes and Jeff Award winner Larry Marshall lends his considerable theistic chops to the role of Joe.

The music in Waitress is a refreshing mix of rock, country and some uptempo numbers that bend musical genres,  enough to keep your ears perked throughout. The solid message is that, like a recipe for a good pie, we're all a variation of the basic mix of flour, sugar, and butter that life somehow blends, folds and tempers through baking in the crucible of life experience. The outcome is partly in our own hands and partly in our openness to experience life's unexpected benefits and surprises.
Posted by Dwight the Connoisseur at 12:17 PM