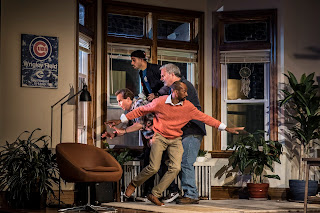 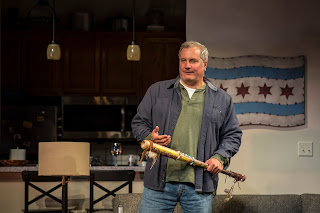 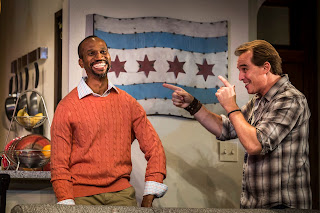 It starts with a quartet of Chicago guys from  varying backgrounds sipping Rose wine in an apartment above a noisy bar on the border of Wrigleyville and Boy's Town on Chicago's near north side. One of them, Delano (Anthony Irons-Goodman-Two Trains Running, Congo Square Ensemble), is the only African American in the group, whose wife left him for the evening to do the house cleaning while she went to the Women's March. You can already see where this is going. Roger (Goodman veteran Keith Kupferer-God of Carnage, High Holidays), is a construction worker who spends his days cleaning "The Bean" in Millennium Park. Alex/Allejandro (Chicago veteran Jeff Kurysz ) is the lone Hispanic in the group. He, of the ambivalent sexual proclivity, becomes the catalyst to a series of events that pushes the boundaries of the group's gum and spit cohesiveness. Brian (Ryan Ritley-Goodman-Objects in the Mirror) is the lynchpin and organizer of the group which is a male bonding group which meets every Thursday evening. Brian, at 51, is the oldest "Genius" working at the downtown Apple support store. The sole intent is to provide the men with a safe place to unburden their fears, triumphs, failures and foibles. Men, historically, are reluctant to talk about their feelings. Its almost a genetic trait that comes with the territory. So Brian's idea was to lend his apartment every week to the exercise. Its based on a loosely fabricated Native American ritual kindred to the smoking lodge. A 'talking stick' is fashioned from an old baseball bat wrapped in pucca shells and some random fake Indian symbols. The possessor of the stick is deemed free to talk about whatever comes into his mind, followed by some meaningless whoops and chest beating, reminiscent of a Boy Scout troop around a campfire. The only hint of authenticity here is that Roger claims to be 1/16th or 1/32nd Iroquois, although he has little, if anything, in the way of factual information to support the claim.

What ensues in Chicago playwright Ellen Fairy's rollicking take on male existence in the #metoo environment is one of the funniest plays you'll see all season here, or anywhere else. Fairy was an unknown local playwright in 2009, when her play "Graceland" opened at the now-defunct Profiles Theatre in Chicago. The play garnered rave reviews and quickly moved to Broadway where she in turn got tapped as a writer for some of TVs top shows; Showtimes "Nurse Jackie" and "Masters of Sex," to name a few.

In "Support Group" A bar fight breaks out in the street outside the bar below the apartment and a woman (so they think) is attacked by a group of drunken patrons. The group swings into action with shouts and threats to call the police. Roger is the only one who makes a decisiver, if unpopular move, that drives the mob away. Another sighting is an unidentified woman (they think) performing a sex act on a man in a nearby alley. Enter Kevin (Tommy Rivera-Vega-Goodman-Lottery Day, Mother Road) a closet cross-dresser who has a disastrous coming-out, who hides in Brian's closet to evade police capture (Officer Novak-Goodman veteran Eric Slater, and Officer Caruso-Goodman Theatre-two seasons of Christmas Carol). It turns out he was the person being beaten by the mob. Wearing a red wig and an ill-fitting dress, he makes a weird, if unwelcome addition to the support group. It turns out that he may be its most meaningful element.

Of all the characters, Roger, the middle-aged "Bean" polisher, is perhaps the best developed. I'd bet anything that his character is based on the playwright's father. We later learn that he was the unsuspecting victim of a sudden vertigo attack who is assigned the purgatory of polishing "The Bean" after a lifetime career of building such icons as the Hancock, Sears (now Willits) , and (unfortunately) Trump Towers. The group, and a late-night personal encounter with cross-dressing Kevin, brings him to an epiphany that is the play's denouement.
For the play to have been written by a woman, it shows remarkable insight into the psyche of a group of men approaching middle age, who are grappling with the tenuous threads of interpersonal relations, sexual identity and the 'mastodon effect' of facing emotional extinction and social/sexual irrelevance in a changing world of gender crisis. Support Group for Men will have you laughing your head off. It will also leave you scratching your scalp pondering the thorny issues that it throws in your face in an overwhelmingly entertaining manner. For tickets and information, visit GoodmanTheatre.org.
Posted by Dwight the Connoisseur at 12:15 PM