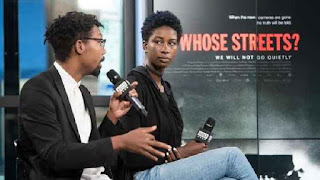 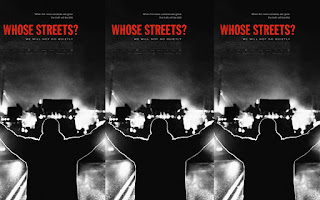 "An unseen war" is how one resident of Ferguson, Missouri describes the way of life for the people left behind in the wake of the killing of Michael Brown by police. The unarmed teenager was killed on August 9, 2014. His body was left lying in the street for hours. Police erected a temporary wall around the body as a barricade to keep people away, but did nothing to remove the body in a timely fashion, thus exacerbating feelings of rage.  A makeshift shrine remains at the site where Brown shed his blood and a generation of teens continues to raise their voice in protest.

The Black Lives Matter movement found its genesis in Ferguson and its voice is echoed in the PBS  POV series documentary "WHOSE STREETS? TRACING A PEOPLE'S MOVEMENT,  which premieres  MONDAY, JULY 30 9pm CT on the award-winning  Emmy (37 awards) and Peabody (21 awards)PBS series POV at 9pm ET.  Directed by Sabaah Folayan and co-directed by Damon Davis, the film examines the unhealed wounds of the Ferguson shooting through the eyes of the activists who found their purpose in its aftermath. 25 year old Brittany Ferrell, a nursing student and mother of a young daughter, founded the group Millennial Activists United, with her partner Alexis Templeton. David Whitt, a husband and father of four, who was alerted to the killing by shots ringing outside his door, picked up a camera to document the police and town official's heavy-handed response.

"Whose Streets?" is a documentary that chronicles one of the pivotal events of our time. Ironically, writer/director Sabaah Folayan is a native of South Central Los Angeles, scene of another pivotal moment in the nation's bloody racial history, the riots in the wake of the Rodney King beating. She organized the Millions March, the largest protest in New York City  for racial justice following the police choking death of Eric Garner.

An advocate for prison reform, she interviewed incarcerated people about their traumatic experience. Woven throughout the film are quotes from Malcolm X, Martin Luher King, Jr. Sojourner Truth and others. Early in the film, the point is made that St. Louis is also the birthplace of the infamous Dred Scott Decision of 1857, in which a black man who sued for his freedom received the ruling from the Supreme Court that neither he nor any other person of African ancestry could claim citizenship in the United States. The irony is not lost on the viewer.

POV is American television's longest-running independent documentary series, now in its 31st year. "Whose Streets?" is a co-presentation with the National Black Programming Consortium and was an Official Selection at the 2017 Sundance Film Festival.  The film's indelible images and plaintive  voices will resonate long after its airing.


Posted by Dwight the Connoisseur at 6:04 AM