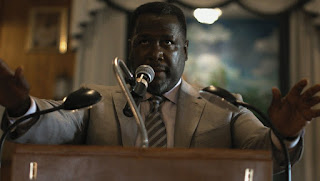 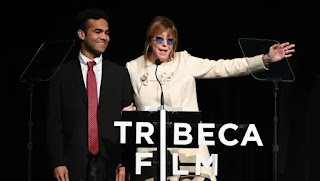 
History was made at the 18th Tribeca Film Festival. 'Burning Cane', the debut feature narrative by 19 year old director Phillip Youmans made him the first African American to win the coveted Founder's Award for Best Narrative Feature, he is also the youngest director to ever have a film presented in the prestigious film festival. Yuma's finished the film at the same time that he was finishing high school.  He is now a Freshman at New York University.

Youmans' masterpiece charts the events of a few days in the lives of the Wayne family and one Rev. Tilman in a small, rural Parish outside New Orleans. the film is recorded in almost documentary fashion b  y the young director's revelatory  camerawork, which also brought him honors for Best Cinematography in a U.S. Documentary Narrative Film.  Youmans was forced to shoot the film himself after his original choice for cinematic chores became  unavailable. His handheld camera gives the film a realistic feel that further adds to its impact. What may have been the result of sheer necessity turned out to be a fortuitous happenstance.  Youmans camera captures microscopic moments that are fleeting, yet quite telling; the opening scene of the sugar cane fields burning in the distance with the faint glimmer of a rainbow, a young boy riding his scooter inside the house. In later scenes, an alcoholic father is seen vomiting in ulcer-induced pain after a bout of binge drinking.  One can sense the undercurrent of raw human drama beneath the  placid overlay of long, humid afternoons. (A local radio announcer warns residents to stay inside 'the cool of your home' as defense against the 90 degree heat and to 'stock up on blue crabs and crawfish. The sale ends when the doors are locked!') Theirs are still waters, but they run deep. The film's story unfolds with the deft hand of a young William Faulkner. We hear the voice of Helen Wayne (a riveting Karen Kaia Livers), the matriarchal core of the film, recounting her endless quest to cure her beloved dog of 13 years, JoJo, of the mange. Applying consecutive doses of Apple Cider Vinegar, Hydrogen Peroxide, Borax, Vegetable Oil and Honey; all home remedies suggested by well-meaning friends and relatives, to no effect. "I won't take him to the doctor. They'll just tell me to take him out to the cane fields and shoot him. They can't tell me when JoJo should die. Only the Lord can do that!") Her mangy dog becomes a metaphor for the wounded souls we meet later in the film. Most astonishing is the fact that she recounts all of this tender, loving care of her dog while butchering a chicken in the bloodiest and most callous manner possible!  The film is loaded with such contradictions. Which, as we all know, is a fact of the human condition.  We then hear a male singer and organist singing Swing Low Sweet Chariot in the local church. That's when we meet the Right, Reverend Tillman (Wendell Pierce).

Vastly underrated, the veteran actor Wendell Pierce (HBO TVS THE WIRE) plays Rev. Tillman, the alcoholic fire-and-brimstone preacher with feet of clay, For his efforts, Pierce also received the Founder's Award for Best U.S. Actor in a Narrative Documentary from the festival. He accepted the award via video from London, where he is currently starring as Willy Loman in the Young Vic production of Death of A Salesman. He was awarded for his stentorian delivery of the sermons that are proclamations of faith, even in the face of his own morass of self-doubt and alcoholism. His words, in part,  act as the narrative 'glue' of the film. His first sermon, invokes the edicts of the late millionaire piublisher Malcolm Forbes who was famously quoted as saying "He who dies with the most toys wins!" Pastor Tillman uses that quote as a parable to springboard into a searing message, admonishing those who place wealth over friendship, possessions over family values and  human relationships. As a storm brews in the distance, Helen confronts her alcoholic son,  Daniel, begins to recount his growing insecurity;  his brother Malcolm served honorably in the military ("I can't compete with that!"). and his father's real or imagined prowess as a breadwinner. " In his clouded mind, his father "worked his fingers to the bone" to provide for his family. He worked hisself to death," he proclaims.  Helen quickly retorts: "Your Daddy died of AIDS! You know your daddy was a whore!" And so goes their increasingly stormy relationship, which figures greatly in the films shocking and inevitable outcome. "I'm worried about JoJo," she continues. "I've done everything I can for him." She may be talking about her dog, but the concern in her eyes is for her son. The film is rife with symbolism. Even the title itself, and the opening image of the cane fields burning in the distance is metaphorical. Cane burning is both destructive and restorative. It gets rid of the wasted crop and provides the ground cover to fertilize the new. It as much an act of annihilation as it is one of purification.  Thus the title, which telegraphs the film's shocking conclusion. 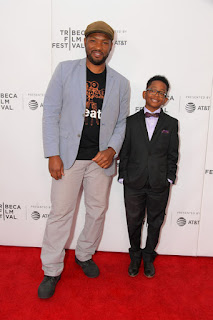 BURNING CANE STARS DOMINIQUE MCCLELLAN (L) AND BRAELYN KELLY (R. AND BELOW) ON THE RED CARPET AT THE TRIBECA FILM FESTIVAL WORLD PREMIERE 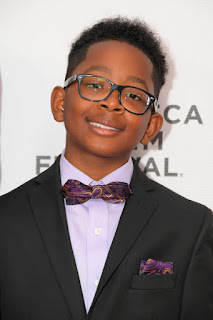 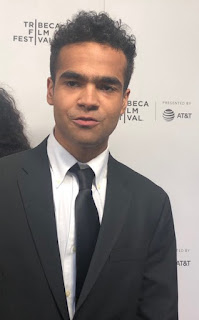 We then meet Jeremiah the luminous wandering sprite of a young boy with hopeful eyes, played brilliantly by  Braelyn Kelly. He is like a latter day Candide wandering through the cane fields and orange groves of his rural Louisiana Parish with eyes of wonder. Youman's unflinching camera captures every nuance of the grim life that he faces within the confines of his tiny railroad car of a home. He's trapped into living  with  an unemployed alcoholic father who commands him to drain out the dregs of  wasted beer cans as respite from his endless watching of old cartoons and coloring books. We see his father crushing beer cans with angry pent up emotion. Then follows a  scene of the two dancing  as they take alternate swigs of whiskey, swaying to an old blues tune on the phonograph (Robert Johnson's They're Red Hot).  The dance is at once endearing and disturbing.

Along the way, we meet Daniel's common-law wife and Jeremiah's mother, Sherry (Emyri Crutchfield), Sherry's admonitions that Daniel find a job are met with violence that only escalates with Daniel's drinking. Soon after, we learn that Sherry is missing. Momma Helen is quick to confront her son on her fate. ( "Do you think I'm simple?!" she demands.)

There are further taboos only hinted at in the briefest suggestions of child sexual abuse,  spousal abuse and, the ultimate taboo in the black community, honor killing. Young Youmans handles all of these weighty subjects with a deft hand, and a maturity far beyond his years. These subjects all fall under the category of "the name that I shall not speak," in Rev. Tillman's final admonitions on the evil subterfuges of the devil, "He will use your family, your friends, your neighbors to turn you to his side. He's coming for you, our children, these precious babies.) His booming words border on homophobia. The film moves at a snail's pace, reflective of the life of those who inhabit it. Scenes are punctuated with angelic swells of choral music from the ages (Mary Lou Williams' Black Christ of the Andes from the words of St. Martin de Pores), Old Time Spirituals (Swing Low Sweet Chariot, This Little Light of Mine, and finally, It'll Be Alright In The Morning from the very real local Mount Sinai Youth Choir). All of this serves to ground the film in its own reality and bring it on home. Burning Cane is a powerful film that reminds us that the concepts of sin and redemption lie within our own grasp and that none of us is free from the  consequence for our actions. Youmans' Burning Cane presents a universal theme that transcends race and class. Its hard to believe that he conceived this film when he was just 16 years old and filmed it when he was 17. The themes, and the way he presents them is mindful of a young William Faulkner, the Nobel Prize laureate author from Oxford, Mississippi. Burning Cane is a masterpiece. Make way for the new generation of great black filmmakers in the person of one Phillip Youmans.

Posted by Dwight the Connoisseur at 2:59 PM