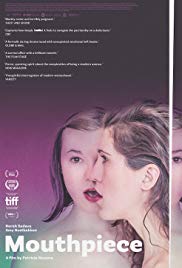 Mouthpiece is a provocative film by Patricia Rozema (Into the Forest, Mansfield Park) that gives an imaginative exploration of the inner emotional turmoil that is faced by a young woman, Cassandra Haywood(Amy Nostbakken) who is confronted with the sudden death of her mother  Elaine (Maev Beaty). In Mouthpiece, director Rozema chooses to depict the internal conflict  of a mother/daughter love/hate relationship. From a script writing by the director Rozema, Mouthpiece  stars Amy Nostbakken and Norah Sadava. The film takes the quirky tack of involving the central character, Elizabeth in a running conflict with her alter-ego, played with tongue-in-cheek candor by  Sadava. Those who have endured a similar circumstance may find the film excruciating to watch because it really cuts close to the bone. Fortunately, director Rozema handles the delicate subject with a deft hand that injects a certain level of dry humor with candor and  a stunningly accurate incite into this prickly subject. The film is presented with such clarity, both dramatically and cinematically that its hard to turn away from.

Beautifully filmed on location in Toronto, Cinematographer Catherine Lutes and Production Designer Zazu Myers  take full advantage of that city's atmospheric  surroundings to draw an effective portrait of psychic angst. Set decoration by Matthew Bianchi, costumes by Marissa Schwartz and Mara Zigler and a killer sound track  with original music by star Amy Nostbakken and incidental and background music assembled by Amy Fritz and Michelle Irving make for an absorbing experience. The nearly all-female production team is to be credited with delivering a truly polished film with lasting impact.

Cassandra Haywood represents the thoroughly modern woman, whose fast-paced life is suddenly interrupted by a seemingly insurmountable personal tragedy. The film represents the conflicting voices that rage inside her head in the 48 hours leading up to her mother's funeral. As seemingly adept as she is at managing the affairs of her personal life, she's all thumbs when it comes to handling this disarming personal crisis.

The film is loosely adapted from the play of the same name by co-stars Nostbakken and Sadava. The film is produced by director Rozema's own production company, Crucial Things and First Generation Films.

With stellar supporting performances throughout, notably Taylor Belle Puterman and Sarah Camacho  as Little and Medium Cassandra, respectively,  and Paula Boudreau as Aunt Jane (Ayesha Mansur Gonsalves alsdo steals a scene or two as the Bartender), Mouthpiece is a film worth seeing.

Open Friday, May 31 at Village East Cinema NYC and Friday, June 7 at Monica Film Center, LA.
Posted by Dwight the Connoisseur at 12:28 PM