FILM REVIEW: WE HAVE ALWAYS LIVED IN THE CASTLE NOW IN THEATERS AND VOD


Atmospheric Film Delivers A Gothic Thriller With A Feminist Twist 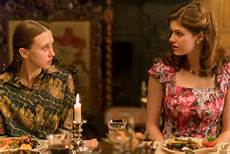 Taissa Farmiga as Merricat and Alexandra Daddario as Constance, the two sisters in We Have Always Lived in the Castle from Brainstorm Media

Columbia College Chicago graduate (1993)and GLAAD Media Award for Outstanding Film-Limited Release-winner Stacie Lyne Passon has delivered one polished Gothic suspense drama in the form of Brainstorm Media's We Have Always Lived In The Castle, in theaters and VOD beginning May 17.  Executive Produced by Michael Douglas, the film stars Taissa Farmiga as the troubled teen Merricat Blackwood, who is haunted by the mystery surrounding the arsenic poisoning death of her parents. It quickly becomes evident that, with her passion for her Book of Spells and her belief in the power of the Forces of Darkness, she may more than a passive hand in the events that have unfolded.  Alexandra Daddario plays her prim and proper sister Constance, who likewise suffered the post traumatic stress of the horror and veteran British actor Crispin Glover as her partially paralyzed Uncle Julian.  His memory has been all but wiped clean by the poison. In the aftermath of surviving the incident, he desperately grabs at straws of the details of that fateful night,  trying to reconstruct  its unfolding under the guise of writing a novel. He recounts the course of events, down to the last morsel of food that was served ("roasted  lamb leg of lamb with mint") with the dispassionate air of an  observer, all the while seeking to exorcise his seething rage as its victim. Sebastian Stan stars in the pivotal role of the charming cousin Charles who arrives on the scene, much to the chagrin of young Merricat. The son of Julian, Charles is the crasher of this sullen pity party, totally unwanted by Merricat, who becomes ever more jealous and enraged as sister Constance becomes entranced by his charms. Its obvious that Charles is only interested in one thing, unearthing the family wealth that has been rumored by the local townies and the tabloids.

The facts of the murder emerge slowly in the course of the film, like figures emerging from the foggy shadows surrounding the Blackwood Estates, perched ominously on a hill high above a tiny village on the outskirts of 1950s Dublin.The film is not without its moments of high drama, which erupt with the sudden force of a newly awakened dormant volcano.

We Have Always Lived in the Castle is expertly filmed by award-winning British  cinematographer Piers McGrail with atmospheric music by BAFTA nominee for Best New Composer for film and TV Andrew Hewitt. Based on the 1962 novel of the same name by Shirley Jackson, the film is a tribute to the art of suspense drama. With superb production design from Anna Rackard and art design from Louise Mathews, the film gradually reveals hints of the darkness that lurks beneath.

Constance's crinoline dresses, the luxurious stained-wood veneers and elegantly appointed sitting rooms of the star-crossed mansion are just so much window dressing for the ugly secrets buried inside the house and under its grounds. Te film is well-grounded with scenes that scream authenticity. (And yes, that is actress Alexandra Daddario on the keyboard playing Chopin's Nocturne No. 9!) 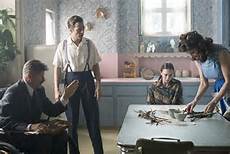 "The Blackwoods have always lived in this house," Merricat says defiantly as the story unfolds. "and we will never leave here, no matter what they say, or what they do to us. Never. But a change is coming, and nobody knows it but me." Stick around and fasten your seat belt. You're in for a bumpy, gut-wrenching ride for the next 96 minutes.
Posted by Dwight the Connoisseur at 8:58 PM