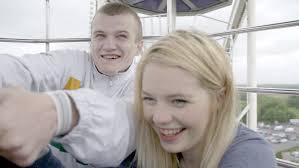 GEMMA AND PAT IN A RARE MOMENT OF JOT 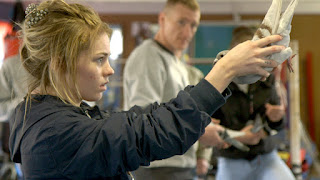 "If you stay here, you either get locked up or knocked up." Those candid words from Gemma, the film's primary focus,  provide the nucleus of the narrative for the 18th Tribeca Film Festival's Best Documentary Feature Scheme Birds from first time directors Ellen Fiske and Ellinor Hallin. Seen through the unflinching eye of cinematographer Hallin, the feature-length debut from this Swedish duo places a laser-like focus on the grim world of wayward teens growing up in the  concrete wasteland of the housing projects of Motherwell, a forlorn Scottish town just on the outskirts of Glasgow.

Music by Charlie Jefferson further illuminates the measured progression of this unfolding drama of hope and humanity.

With its  gang bangers, school dropouts and teen pregnancies, this fractured coming-of-age tome could just as easily been filmed in Detroit, Chicago, Atlanta, or any other hovel of despair in America.

Gemma was born just after the Thatcher administration shut down the steel mills in Motherwell, the town's sole source of livelihood. As she grows into her teen years, she witnesses the steel mill's demolition, a reflection of the crumbling pillars of her own life and those around her.

Gemma and her teen cohorts seem to delight in their endless cycle of violence, drugs and promiscuity. There's a certain bravado in Gemma's voice as she says with pride that she and her cohorts nicknamed themselves "Scheme Birds."

The seeds of the unraveling of the Scheme Bird's flawed paradise quickly develop. Gemma becomes pregnant by Pat, one of the ringleaders of the Scheme Birds who starts to rack up some serious jail time notches on his belt. The gang takes their violent outbursts to the brink by beating one of their own into a comatose near- human vegetable. Gemma begins to reassess her loyalty to a lifestyle on the fast track  to disaster.

Gemma is mentored under the world-weary eye of her grandfather, the local boxing gym manager, who finds solace in raising homing pigeons, which become a running metaphor throughout the film.
Most of the birds return home, grandpa Joseph muses, but there are a few who, once released, never come back.

The words "let the free birds fly" are  tattooed on Gemma's shoulder. One has the feeling  that Gemma has just what it takes to become one of the lucky few who will. 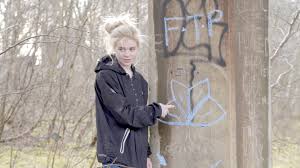 GEMMA  EXPRESSES HER LOVE FOR HER BABY'S FATHER,  PAT 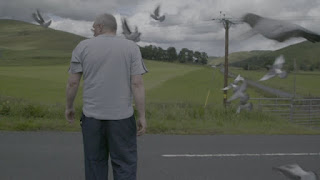 GRANDFATHER JOSEPH AMONG HIS HOMING PIGEONS

Posted by Dwight the Connoisseur at 11:11 AM