In The Heights a living tribute to a dying culture 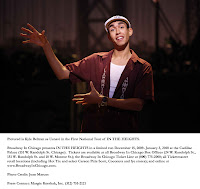 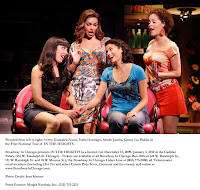 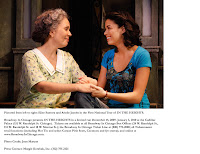 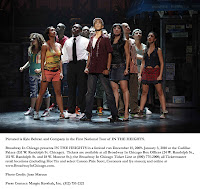 The story of the new Broadway In Chicago musical, the Tony Award winning “In The Heights” at the Cadillac Palace Theatre through January 3, has all the trappings of a rags to riches movie.

In fact, as the curtain went up on the opening night at the Palace, both Variety and the Hollywood Reporter broke the news that Kenny Ortega, the famed director of Michael Jackson’s “This Is It” and the “High School Musical” trilogy and choreographer to the 1987 film, “Dirty Dancing”, would direct the film version for Universal with writer and composer Lin-Manuel Miranda reprising his starring Broadway role.

“In The Heights “ was conceived and written by Miranda while a sophomore at Weslayan University, a liberal arts college in Middletown, Connecticut, near New York City.

He and director Thomas Kail developed a workshop version for the National Music Theatre Conference at the Eugene O’Neill Theatre Center in nearby Waterford, CT. It then enjoyed off-Broadway success and the rest, as they say, is history. Miranda went on to star in the original Broadway production where it was nominated for 13 Tony Awards. It won for Best Musical at the 62nd Tony Awards in 2008.

The national tour has been underway since October after opening in Tampa, Florida and, from what I saw at the Cadillac Palace, this is a first-rate production.

“In the Heights” is a unique window into a largely unknown culture to those of us who live outside of New York, the Dominican-American community of Washington Heights in Manhattan. The neighborhood is more like a small village than the satellite to a larger community. It is a world unto itself, and for two and quarter hours; we are privileged to drop into it for a helicopter’s view of its rich, but bittersweet reality.

The play spans three days in the life of ‘the heights’ through a musical kaleidoscope of salsa, meringue, hip-hop and soul.

Washington Heights is located at the highest point of Manhattan on its northernmost end. It is above Harlem, near the George Washington Bridge. Named after Fort Washington, a fortification occupied by the Continental Army during the American Revolutionary War, it was the site of General George Washington’s single, humiliating defeat against the British.

Since that inglorious beginning, the area has been a virtual march through the travails of twentieth century history. Beginning with the Irish fleeing the potato famine of the early 1900s, to Jewish refugees escaping the Nazi Holocaust of the ‘30s and ‘40s, its cracked pavement has been the highway to freedom and a pathway to dreams for a steady succession of immigrants.

The ‘50s brought Cubans fleeing Castro’s regime. Puerto Ricans, seeking a new life, arrived in the ‘60s and ‘70s. Then, in the ‘80s and ‘90s, immigrants from the Dominican Republican arrived to put their indelible stamp on these well-trod streets.

The play has similarities to some of its Tony-endowed antecedents. The characters introduce themselves individually in vocal and dance soliloquy ala A Chorus Line. The ramshackle sets are straight out of RENT; substitute the street corners of upper Manhattan for a tenement loft in the East Village. The dance numbers and the star-crossed Romeo and Juliet romance of the Ben and Nina characters are straight out of West Side Story.

Miranda plays our heartstrings to captivating Latin beats that sweep us along on his journey of self-discovery. Although we know exactly where he’s going, we willingly jump into the Salsa line and dance behind him.

The characters are very well drawn and beautifully performed. Up and coming actor Kyle Beltran is Usnavi, the title role originated by Miranda. He’s owner of the bodega (a tiny open-air corner convenience store that sells every thing from sweet morning café’ con le’che to masking tape from its crammed shelves and busted drinks cooler.) “My parents named me after the first ship they saw in New York Harbor,” he tells a compatriot. “Actually, the letters on the ship read ‘U….S…..NAVY! But, you gotta work with what you have!” That self-deprecating statement tells you everything you need to know about Usnavi’s personality. Don’t you just LOVE him already!?

Usnavi’s dream is to win the lottery and move back to the Dominican Republic. He had a chance to move once before, but realized that the barrio was his true home. He’s in love with Vanessa (Yvette Gonzalez-Nacer, a Broadway veteran whose credits include 3 Mo’ Divas, Roller Derby, Corridos Remix (CAN-Best Actress), Cabaret and West Side Story). She works at the gossip factory of a salon next door with unrealistic dreams of moving downtown.

Dreams are central to the story of “In The Heights” and it is this motivation which makes the play so captivating. We instantly identify with the characters and are drawn to them and their fragile humanity.

Nina (Arielle Jacobs, ‘Gabriella ‘in the national tour of High School Musical) is the daughter of the macho-proud, vainglorious Kevin (Broadway and Regional Theatre veteran Daniel Bolero) and his wife Camila (a feisty Natalie Toro of Les Miserables and A Tale of Two cities on Broadway), who dreams of opening a local restaurant.

Nina is the first to go to college in her family and perhaps in the whole neighborhood. Everyone looks up to her until they learn she’s dropped out of Stanford because she couldn’t make the grade or connect with the preppy, upper-classed culture, a secret she kept from her parents for months. It becomes a real source of conflict early in the play. To heighten tensions more, she gets involved with a Benny (Rogelio Douglas Jr., most recently on Broadway starring as Sebastian the Crab in Disney’s The Little Mermaid), the only Black youth in the neighborhood, who works for her father’s livery company, Rosario car service. Owner Kevin considers him unworthy of his daughter’s company, because he isn’t Latina, even though he’s practically been a surrogate father to him. And there you have the ‘West Side Story’ element of star-crossed lovers playing out their doomed romance against the backdrop of the barrios.

Benny/Rogelio and Nina/Jacobs engage in a heart-wrenching duet on the fire escape of their tiny love nest that nearly brings tears to your eyes.

The character of Kevin also makes a selfish decision on behalf of his daughter that threatens to tear both his family and the community asunder.

Other characters give sterling performances, including those of some of the minor players, including Jose-Luis Lopez as Graffiti Pete, a local vandal who actually turns out to be a kind-hearted, but frustrated artist who later evolves into the conscience of this drama and Shaun Taylor-Corbett as Sonny, Usnavi’s precocious cousin who works for him at the Bodega. Sonny is either the next Che Guevara or the next Master OC, depending on the time of day and who’s listening to him. Other outstanding players include David Baida as Piragua Guy, the owner of an illegal street-vending cart who fears being put out of business by his more legitimate competitor, Mister Softee. He sings a brief, but sprightly, Salsa-infused song that is one of the delights of the show.

Veteran Elise Santora, who joins the tour directly from the Broadway show, reprises her role as Abuela Claudia. Abuela means grandmother in Spanish and is often used as a term of endearment and respect. Her character is the matriarch of the family as well as the community. She virtually raised Usnavi and becomes his co-conspirator in a scheme to resurrect their own fortunes as well as members of their extended family. She is a pivotal character in that she, unknown to them, holds the key to all of their future success in her hands (or at least, her bosom) as she reveals in a heart-searing aria that stops the First Act in its tracks. Y Arriba!

Sadly, in reality, urban gentrification has taken its toll on ‘The Heights.’ The Dominican population has dispersed to other, more stable, neighborhoods in the Bronx, a sign of their ascendancy and assimilation. The musical is fast becoming a living monument to a time and place that will soon only live in memory.