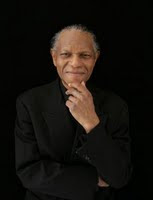 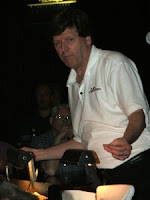 It was a meeting of two prolific jazz minds, with a combined repertory of more than three-quarters of a century between them. Nearly 50 years ago, pianist and composer McCoy Tyner burst on the jazz scene as the explosive sideman for the legendary saxophonist John Coltrane, in one of the most celebrated collaborations in jazz history. For more than 30 years, Jeff Lindberg, Co-Founder, Artistic Director and Conductor of the Chicago Jazz Orchestra, formerly the Jazz Members Big Band has made a career of transcribing and performing the largely unwritten orchestrations of jazz greats such as Duke Ellington, Count Basie and Duke Ellington, among others. His work has been held in such high esteem that many of the greats of our time, most recently piano legend Dave Brubeck, have commissioned him to commit their early-improvised works to paper. So it was that the fourth installment of the Jazz at Symphony Center series would bring these two giants of the jazz world together in a sublime evening of music, recreating Tyner’s big band charts of his Blue Note days and beyond. A more apt collaboration could not have taken place.

Tyner strode somewhat tentatively onstage, apparently showing the effects of an extended illness that had sidelined him a couple of years ago. Once seated at the Steinway, he began to make his way around the familiar territory of the keyboard and by the second half of the concert, was playing the kind of stormy, contrapuntal complexity that is his signature. Accompanied by his stalwart trio of Gerald Cannon on Bass and Eric Kamau Gravatt on Drums, Tyner plowed through the Latin-fusion original composition “Suddenly” before delving into the stride waters of Duke Ellington’s “In A Mellow Tone.” Tyner showed his unique ability to identify the melodic ‘shape’ of a tune and then expand it through a series of complex voicings, dense chord progressions and daring improvisational leaps to create a mind-bending listening experience. Guaranteed, your mind will not drift during a McCoy Tyner solo!

The second half of the program brought the piece de resistance, McCoy Tyner in a big band setting with Jeff Lindberg’s esteemed 13-piece ensemble. From the opening notes of Tyner’s signature composition, the blues based chord changes of “Blues on the Corner”, which Tyner later explained to the audience, had been written for “some dudes who were singin’ doo wop on the corners back in Philly when I was growing up”, was a raucous, supercharged romp through the creviced streets of his childhood and the gritty influences that shaped his later work. It was straight ahead jazz at its finest. The crisp solo trumpet of Derrick Gardner, the angular permutations of Tom Garling on Trombone and the ‘Trane channeling muscle of Ari Brown made this a romp through the history of modern jazz from the blues, to Be Bop and the Avant Garde. Lindberg’s conducting of this, and the subsequent number, “Update” arranged by Tyner’s former drummer Dennis Mackrel, cut right to the heart of the matter. Lindberg’s unique quality is his ability to take music that is completely scripted and make it sound wholly spontaneous. That is the very essence of jazz performance.

Passion Dance, Tyner's maiden compositional effort after his break with John Coltrane is his exuberant Emancipation Proclamation. Lindberg & Co played it with all the manic fervor it deserved, reminding one of Stravinsky's 'Rite of Spring. It was the highlight of the evening.

Tyner was in his element. He sounded like his old self. Close your eyes, and you were transported back to the Village Vanguard, circa 1968. It was all there, the percussive left hand and the explosive ‘chops’ in the right with polyphonic juxtapositions of chords and avalanches of sound.

The following original composition “No Frills” brought forth a stunning Alto saxophone solo from John Wojciechowski. “Woj” unleashed a torrent of rapid-fire 1/16th and 1/32nd notes that wove a tapestry of sound, unfolding in a feat of circular breathing that defied the very laws of nature.

Tyner graciously provided the audience with a solo encore, the Sam Lewis and Fred Coots classic, the plaintive ballad “For All We Know.” He played it with emotional depth and stunning technical facility, even evoking the sound of rushing waters in the lyric’s line “We come and go, like the ripples on a stream.” It was divine.

This was the best performance of the Jazz at Symphony Center series to date and one of the best overall to emanate from the Armour Stage.

Posted by Dwight the Connoisseur at 8:14 AM