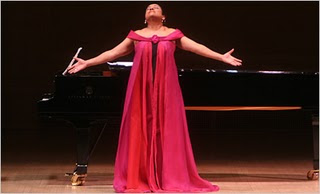 Kathleen Battle unquestionably has one of the most beautiful voices of the last half of the twentieth century. I’ve been privileged to have heard them all, from Callas to Fleming. Although a small voice compared to other notable singers, hers is unusual in its tone and clarity. Her voice seems to come from some ethereal source. That was evident from the first notes of a succession of Spirituals and Traditional songs accompanied by the brilliant jazz, soul and gospel stylings of pianist Cyrus Chestnut in a concert of Traditional Songs and Holiday favorites at the Harris Theater.

Kathleen Battle is the winner of five Grammys and has enjoyed an enviable career. I first encountered her in San Francisco where she starred in a production of
Strauss’s Ariadne auf Naxos under the late Kurt Herbert Adler. The great maestro Edo de Waart introduced me to her after a performance of her Grammy Award winning Four Songs by Strauss with the San Francisco Symphony. I quickly became a devoted fan and ‘groupie’, traveling to Covent Garden, London’s Barbican Center, Manchester and the Paris Opera (under the baton of former Chicago Symphony Music Director Daniel Barenboim) , to see her perform.

For 14 years, she reigned as one of the supreme divas of the Metropolitan Opera House, singing 150 performances in 13 roles from 1980 until 1994, when she was summarily fired by then- General Manager Joseph Volpe for “unprofessional” behavior. She quickly rebounded her career, singing sold-out concerts around the world and making regular performances at festivals, including annual visits to Chicago’s Ravinia. In 2008, she sang the Lord’s Prayer at the arrival ceremony in honor of Pope Benedict XVI at the White House.

Kathleen Battle’s voice is an instrument of exceptional beauty as she proved in a poignant ‘Give Me Jesus’. It led to a lilting ‘Wade In The Water’ that featured some soulful interplay between the singer and her pianist, belying both of their church roots. Chestnut provided the gritty, heartfelt fervor and blues-based interludes that he is known for in his critically acclaimed albums and performances. It was a collaboration of two kindred spirits.

The centerpiece of the Traditional section of the program was her rendition of ‘This Little Light of Mine’, which ended in a coloratura flourish that recalled the Kathleen Battle of old.

In the final segment of the first half of the program, the Chicago Children’s Choir, a stellar collection of young voices, joined her on stage. Battle seemed right at home, giving the young people their pitch and occasionally turning to give them an encouraging gesture. After all, she began her career as a teacher and her love of children shone through.

She had instant rapport with the young people, occasionally turning to give them their cue, even fully conducting them to a crescendo while singing beautifully in ‘Go Tell It On The Mountain.’ At that moment, she was large and in charge! Unfortunately, things quickly descended from that magical height. A flurry of cell phone camera flashes distracted the singer, causing her to point out offenders to the ushers and verbally call them out.

Artists shouldn’t have to tangle with unruly audience members. Granted, this was not a typical classical music concert crowd of the type Ms. Battle is accustomed to. There were many young people in attendance, some brought by their parents, others brought there through the generosity of donors who provided blocks of free tickets to students and underprivileged youth. I don’t think any of them were among the offenders. The ones I saw were adults who should have known better.

Performance is a two way street. Audiences should be courteous enough to observe house rules against cell phone use, digital cameras and recording devices. A performer shouldn’t have to march around the stage like a coach at a Bulls game calling for time out. Perhaps houses should start checking cameras and digital cameras at the door as they did at some rock concerts and film screenings I have been to.

The discourteous audience marred what was otherwise a sublime concert.

Posted by Dwight the Connoisseur at 7:22 AM