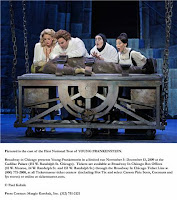 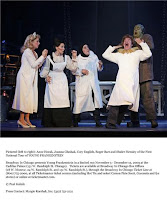 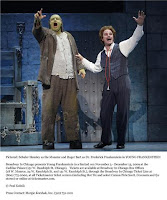 Since laughter is considered the best medicine, it would be a good idea for the White House to pass out free tickets to see Broadway In Chicago’s current production of The New Mel Brooks Musical, Young Frankenstein. In the absence of a national health care bill, the musical, now at the Cadillac Palace Theatre through December 13, is a guaranteed tonic for what ails you.

Tony Award winners Roger Bart and Shuyler Hensley reprise their Broadway roles of Dr. Frederick Frankenstein (or Franken—STEEN, as he insists) and The Monster in the first national tour.

The musical spoofs every convention of musical comedy from the early days of Yiddish Theatre ahnd Broadway to the present day. There’s Al Jolson-ish hamming and Marx Broithers styled slapstick. The only thing jmissing is a pie in the face. Just when things start to cross the line into hokey-ville, something magical happens toi bring things back into side-splitting focus.

Corey English as Igor practically steals the show early on in “Join The Familyu Business, when Frederick arrives in Transylvania Heights to answer a proposition to take over Dr. Frankenstein’s monster factory when his grandfather passes away. Anne Horak as Inga is the vampy lab assistant who is introduced in the humorously risqué number “Roll In The Hay.”

It all seems to culminate in Act Two with some terrific production numbers Directed and Choreographed by Susan Stroman. The dancing is factastic, as are the sets and costumes. The entire production just sparkles from the opening laser-light ‘thunderbolts’to the closing strobe-lit Finale Ultimo.

This remarkable show is one of the best of the Broadway in Chicago bunch. It’s surte to score with audiences just as Brook’s earlier hit, ‘The Producers’ did some years ago.

Posted by Dwight the Connoisseur at 10:20 AM