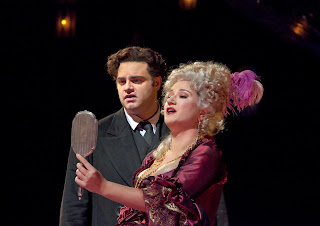 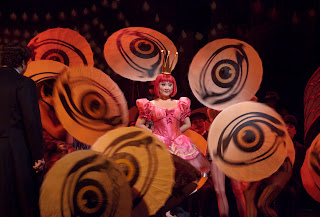 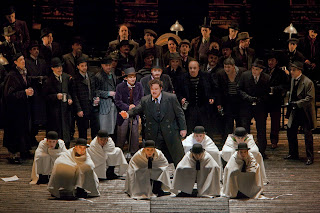 Metropolitan Opera’s LIVE IN HD 2009-2010 series continued with a scintillating production of Jacques Offenbach’s “Les Contes de Hoffmann (The Tales of Hoffmann), seen on movie screens around the world, including a local screening at Cinemark Seven Bridges in Woodridge on Route 53 and Seven Bridges Drive. The production was directed by Tony Award winning Director Bartlett Sher (South Pacific), who also directed the Met’s new production of The Barber of Seville, which was seen LIVE IN HD during the 2006-07 season. Met Opera Music Director James Levine conducted the spirited score from the pit. Written during Paris’s Belle Époque of the late 19th Century, the opera, based on a play derived from the stories of the real German writer, poet, composer and painter E.T.A. Hoffmann. To understand the opera, you really have to know something about the real Hoffmann and about Offenbach. Ernst Theodor Wilhelm Hoffmann(1776-1822), better known by his pen name E.T.A. Hoffmann was a sort of Renaissance man. Trained as a lawyer, he was also a music composer and critic, a draftsman and caricaturist ala Jules Feiffer. He became one of the leaders of the Romantic movement of the 19th Century and influenced authors such as Edgar Allen Poe and Charles Dickens in his stark depictions of horror and fantasy. Hoffman’s writing often exposed the dark underbelly of human emotion behind the hypocritical façade of bourgeois life. He would have made a great Washington Correspondent! Jacques Offenbach (1819-1880) rose from being a cello virtuoso and composer of avant-garde music to become a leading composer and impresario of operatic theatre. Offenbach was born the son of a Jewish cantor in Cologne. His father had changed the family name from Eberst to Offenbach before moving the family to Paris, where Jacob suddenly became Jacques when he began his music studies at Paris Conservatoire. It was this sense of alienation; of being the perennial ‘outsider’ that Director Bartlett Sher says he drew upon in creating this new production of ‘Hoffmann’ for the Met. “I wanted to draw on his Jewish-ness, his sense of somehow being an outsider and the kind of conflict and emotional restlessness that must create. I used that in developing the scenic images you see on stage,” he told Met backstage interviewer and diva Patricia Racette. “Much of the opera happens in his mind, so the challenge was to create a landscape on stage that would suggest the fluid state of his imagination and the conflict that surrounded him, both real and imagined.” In the opera, the poet Hoffmann is seen alternately writing and recounting stories of his many loves. In the opening act, he sings of his longings for a woman whose beauty exists only in his imagination. The role of Hoffman is sung quite eloquently by Maltese tenor Joseph Calleja. The raven-haired beauty, Russian soprano Anna Netrebko sizzles as the tragic Antonia. Mezzo soprano Kate Lindsey is the wondrous scene-stealer of it all with her sparkling vocalism and dramatic acumen as Hoffmann’s Muse, appearing in disguise as his friend Nicklausse. Her tailored look only serves to heighten her sensuality and physical beauty. Speaking of sensuality, the spectacular sets and costumes really take a stratospheric leap in the Third Act in the fantastic Viennese party scene. What live audiences experienced as partially nude dancers at Lincoln Center was toned down for the LIVE IN HD audience, with the dancers appearing in more subdued tops (there apparently had been a flurry of complaints over the appearance of topless dancers in the season-opening transmission of Tosca). There are sensational performances throughout this production of Hoffmann. Korean soprano Kathleen Kim literally sparkles as the mechanical doll Olympia, who is the early object of Hoffmann’s deluded affection. Her comic acrobatics and crystalline voice make this a highlight of the first act. Illinois native, baritone Alan Held, lends mischievous gravitas to his multi-faceted role as the Four Villains. The last chance to see Hoffmann live at the Met is Saturday, January 2nd. Tickets are scarce, but it’s worth a New Year’s Weekend trip to the Big Apple to try to snag a last-minute turn-in. The next LIVE IN HD production is Der Rosenkavalier, Saturday, January 9 at noon. Tickets are going fast for this one because of the double lead of Met super-divas Renee Fleming and Susan Graham. For more, visit www.metopera.org.

Posted by Dwight the Connoisseur at 5:10 PM