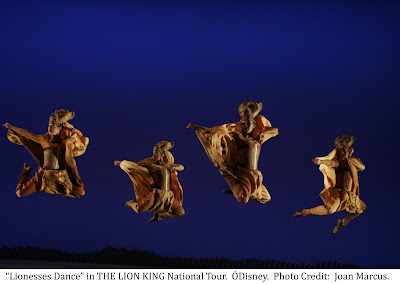 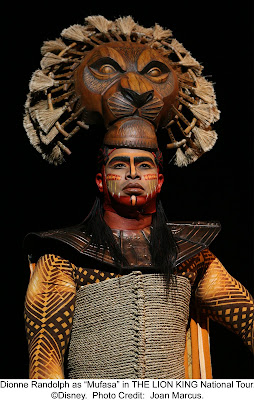 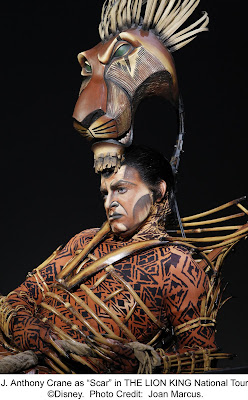 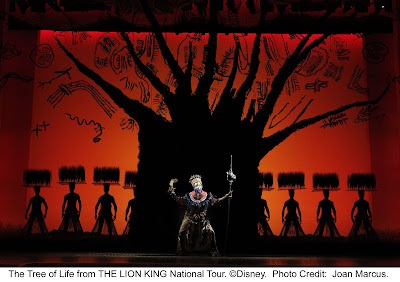 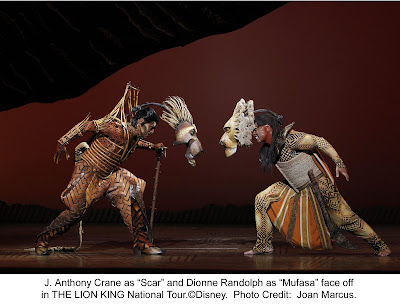 Chicago-From moment the audience enters the Cadillac Palace Theatre in Chicago’s Theatre District, they are immersed in a mythical African wilderness setting. An announcer’s voice intones the usual cautions about using cell phones and cameras during the performance, but ends by speaking in the African ‘click’ language of the Xhosa. That’s the signal for drummers, stationed in the corner boxes, dancers, and singers, in costumes that double as life-sized puppets, to descend upon the theatre from every direction, eliciting head-snapping gazes from the audience. The singers, dancers and actors represent various inhabitants of the jungle. Those not wearing puppet costumes wave kites that resemble exotic birds or wear tribal masks that could rival anything in the Field museum.

The Lion King has dazzled audiences around the world winning more than 70 major awards worldwide, including the 1998 Tony and the 1999 Grammy for Best Musical Show Album. The fact that it has already played two sold-out runs at the Cadillac Palace Theatre speaks volumes. The show continues its current run through November 27 before moving on to Norfolk, Durham, Providence, Rochester, Toronto and Dayton through July 10.

Director Julie Taymor achieves a masterful level of visual alchemy with her seamless melding of African art and Broadway craftsmanship. Her stunning use of anthropomorphic costumes at once imbues the characters with animal traits and infuses them with a human soul.

The music is a fusion of American pop and the distinctive sounds and rhythms of Africa thanks to the score by Elton John and Tim Rice, with additional material from South Africa’s Lebo M, Mark Mancina, Jay Rifkin, Director Taymor and Hans Zimmer. The centerpieces are the Academy Award-winning song “Can You Feel The Love Tonight” and the haunting ballad, “Shadowlands.”

Among the more imaginative examples of Taymor’s arresting art are the dancers in Act One who glide across the stage, representing the tall Savannah grass of the Serengeti Plain.

Among the actors, Tony Freeman steals the show as the prim and proper horn billed bird “Zazu” and Syndee Winters as the loyal lioness “Nala”. She delivers a heart-rending, soulful vocal performance that becomes the musical’s gravitational center . Dionne Randolph is awe-inspiring as “Mufasa,” the great warrior and ruler of the Pridelands and J. Anthony Crane is deliciously sardonic as his nemesis, the cunning “Scar.” His portrayal recalls the persona of the late Yul Brynner. Adam Jacob’s broad-shouldered athleticism and luminous voice elevates the role of Mufasa’s son, Simba, the lion prince born to be king, to the level of a virtuoso performance.

Disney’s The Lion King creates a universe of dazzling sights and sounds and gripping human emotions. It draws in the audience and holds them until the final drumbeat echoes through the theatre. Leaving the Cadillac Palace, one can still hear the sound of distant drums and the wind blowing through the tall Savannah, beckoning a return. For tickets and showtimes, visit www.BroadwayinChicago.com.

Posted by Dwight the Connoisseur at 8:40 PM