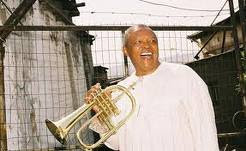 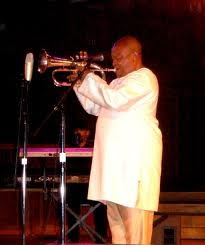 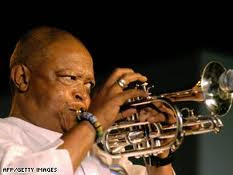 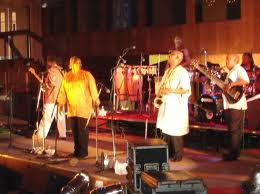 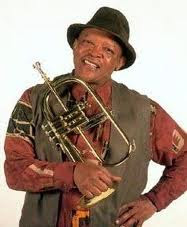 The name of trumpeter/composer Hugh Masekela is as indelibly tied to the freedom fight of his native South Africa, as is that of his late, former wife, singer Miriam Makeba and, more famously, that of former South African President Nelson Mandela. In many ways, their lives and the fate of their country are as intertwined as the plotlines of a Robert Altman film.

The same can be said for Masekela’s music. Although steeped in the early straight-ahead jazz traditions of Dizzy Gillespie, Miles Davis and Charlie Parker, his music is also informed by the new jazz avant-garde leanings of Lester Bowie and Don Cherry. In fact, over his more than half-century career, he has performed and recorded with many of them and other jazz legends.

Yet, Masekela stands alone. Best remembered for the blazing 1968 crossover pop/jazz hit, Grazin’ In The Grass, composed by fellow countryman Philemon Hou, his SBC Symphony Center Presents concert revealed that his music is so much more. It is a at once an autobiography and a journal of his people as well as a living bibliography of the growth of modern jazz and world music and their umbilical ties to Mother Africa.

From the very beginning, Hugh Masekela’s life and music were intertwined with the struggles, conflicts and sorrows of South Africa. Following a successful tour of South Africa with the Manhattan Brothers, he toured with the blockbuster musical King Kong for a sold-out year with Miriam Makeba, who would later become his wife. King Kong went to London’s West end and the rest, as they say, is history.

Masekela played the Flugelhorn, a stylized version of the trumpet, which has a larger bell and a wider, overall aspect, which gives it a deeper, mellower sound. High notes are rounded in such a way that they don’t give off the piercing sounds of the trumpet in the upper register. The instrument perfectly matches the deepening, mellow tone of Masekela’s voice, which he, at times, intoned like an ancient wind instrument.

It’s hard to believe that Masekela is 71. He danced with fluid, seductive movements while singing in various languages of his homeland—Zulu, Xhosa, Afrikaans and Shangaan, to name a few. Most told of the hardships of suppression under apartheid. Not one word was understood by anyone in the largely African American audience, but they seemed to get the import of his message quite clearly.

There were whoops and yells when, near the end of one song, Masekela “dropped it like it was hot” after an energetic exchange with the bass guitarist. Playing rhythms on a cowbell and singing in chant-like repetition “Doin’ It” his conveyed a message that was at once sexual innuendo and political manifesto. “They’re doin’ it in Namibia!” he said to loud applause, referring to the struggle of the people of Namibia to regain their birthright and their homeland after centuries of colonization and oppression.

There were moments of levity and, of course, a reprisal of the song that has become his personal anthem, Grazin’ in the Grass, which sent everyone dancing the Toyi-Toyi out of the doors of Symphony Center into the cool, moonlit night on Michigan Avenue.

Posted by Dwight the Connoisseur at 8:24 PM