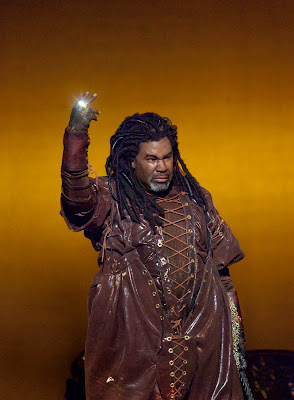 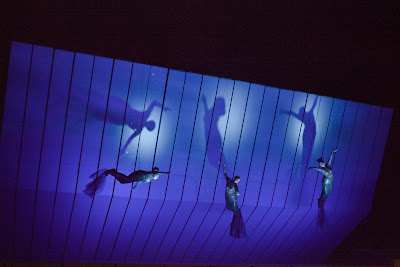 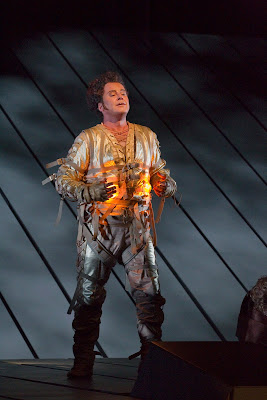 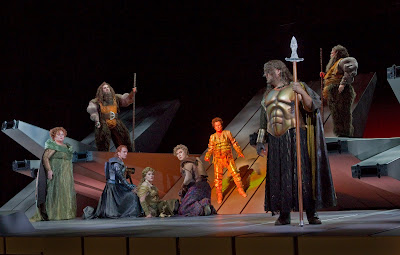 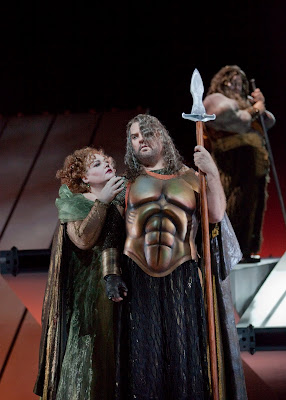 New York-It’s hard to believe that Das Rheingold (The Rhine Gold) by Richard Wagner, premiered in 1869. From the moment Met Opera Music Director and Conductor James Levine lifts his baton to begin the overture to the first of the four operas in The Ring Cycle, entitled Der Ring des Nibelungen (The Ring of the Nibelung), the opera has an urgency that speaks to this time. This is the first new Met production of Das Rheingold in more than two decades. Directed by Robert Lepage, this production seems to finally realize the expansive vision of its creator. Wagner’s Die Walkure comes on April 22.

Presented Live in HD, it is a multi-media extravaganza. The new production uses an arsenal of cutting-edge technology. Combined with the musicianship and artistry that is the hallmark of Metropolitan Opera, this ‘Ring’ embodies the very definition of the term “Grand Opera.”

Digital video images, acrobatic dancers performing as if suspended in space, sets that transform and evolve like technical “dissolves” in cinema, not only dazzle the eye, but engage the viewer’s psyche. The production scans the complete visual and emotional landscape of Wagner’s mythical representation of life among the gods.

The dramatic singing features an all-star cast headed by the regal Welsh bass-baritone Bryn Terfel as Woton, the lord of the gods,The American mezzo-soprano Stephanie Blythe is his wife, the goddess Fricka, the dynamic African-American bass-baritone Eric Owens is the Nibelung dwarf Alberich, who eventually becomes their enslaver, American soprano Wendy Bryn Harmer is Freia, who is ransomed as payment for the building of Wotan’s dream castle and American tenor Richard Croft is the capricious Loge, the god of fire. Their voices add to the onstage fireworks.

There is much about this new production that is informed by modern cinema. For example, Loge’s costume and demeanor echoes that C-3P0 in George Lucas’s Star Wars. There are elements of visual craftsmanship and execution that approach James Cameron’s landmark creation, Avatar. There are also echoes of Peter Jackson’s Oscar-winning film trilogy, “The Ring.” The scene of the mermaids, acrobatic dancers suspended in mid-air on guy-wires “swimming” through a digitally created ocean, is one shining example of the film-like technical wizardry.

Vocal performances match the superior quality of the visual elements at every turn. Bass-baritone Eric Owens is especially noteworthy as the sardonic Alberich. To this reviewer, who is African American, his words as he dons the helmet fashioned from the gold ring and proceeds to enslave the Nibelungs are imbued with added gravitas.

This is a production that has the ring of historic significance throughout. All live performances at the Met are sold out, but, thanks to the Peabody and Emmy Award-winning series, The Met: Live in HD, the opera will be shown in an encore performance Wednesday, October 27 at 6:3pm local time, in more than 100 theatres in North America and across the globe, including the Cinemark at Seven Bridges in Woodridge, Illinois and AMC River East 21 in Chicago.

Posted by Dwight the Connoisseur at 5:47 PM