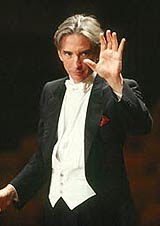 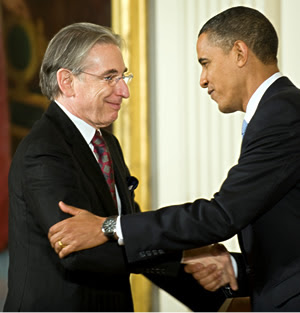 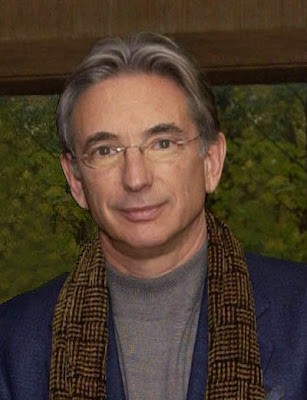 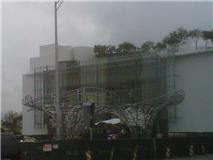 Miami Beach—The esteemed conductor Michael Tilson Thomas is making music history in Miami’s South Beach. In just a few months, he and his New World Symphony, the orchestral academy he co-founded with Ted Arison in 1987, will move into their new performance hall and campus, designed by famed architect, Frank Gehry creator of the Guggenheim Museums in New York City and Bilbao, Spain and the Walt Disney Concert Hall in downtown Los Angeles.

Thomas’ vision was to do more than chaperone a mere “student orchestra”, but to create an environment and a curriculum that will produce musicians who will become the leaders of the industry in the 21st Century. Based on the performance billed as “MTT’s Lincoln Farewell Concert” in the familiar Art Deco theatre building on South Beach’s popular Lincoln Road Mall, the orchestra and its concept have matured into a viable medium.

The concert began with a modern work, Steven Mackey’s 1993 composition, “Eating Greens,” with the composer listening in and trading witty barbs with Maestro Thomas on the significance of the work via live video satellite, a high-tech touch that will no doubt be a staple at the new forward-looking facility now in the final stages of completion just half a football field away.

“This was the piece where I most felt like me,” Mackey told Thomas and the audience via the video hook-up. “Since I wrote the piece nearly 18 years ago, I hardly think of it as ‘new music’ anymore. In fact, I really thought of the piece as being influenced by my background as an electric guitarist. In writing “Eating Greens,” I tried to synthesize that sound through the orchestra and make the orchestra one giant electric guitar.” The composition uses the solo saxophone, a rarity in ‘classical’ music composition, and thematic material borrowed from Christmas carols, popular jingles and even some of the errant sounds of twentieth and twenty-first century life, like the sound of a dial tone and the mechanical-voice intonations of a telephone operator after an incorrect number is dialed. “So much of twentieth century music inhabits the dark places that are sort of creepy. I come off as sort of a maverick because I prefer to look at the music through the apotheosis of the dance. Sort of the way Shakespeare tried to examine the problems of the whole world by looking at it in little pieces.”

Thomas and the New World Symphony took the audience on a joyous romp through Mackey’s musical excursion of Religion, Art, Food, Bread and Wine and a final Homage to jazz icon Thelonius Monk entitled “Drunk Monk.” At the conclusion of the performance Mackey feigned embarrassment, jokingly holding a copy of the score over his face while the audience applauded.

Cello soloist Lynn Harrell’s nimble fingers seemed to float effortlessly over the strings and fingerboard of his 1720 Montagnana cello. The sound he created in his almost poetic reading of Peter Ilych Tchaikovsky’s Variations on a Rococo Theme for Cello and Orchestra captured the work’s song-like qualities. Harrell’s sound was less like that of an instrument. Instead, he filled the auditorium with a heavenly sound like a vocalist singing a song without words.

Beethoven’s Symphony No. 7 brought out the dancer in Maestro Thomas as he explored the lilting summery interludes of the work the ailing composer undertook while vacationing at a Bohemian spa in the summer of 1811. It turned out to be the calm before the storm the composer’s life would become in his ensuing, final years. This was the ailing Beethoven coming back to life with a spirit of rejuvenation and hope. What a fitting farewell to the lovely, cozy Art Deco space that had been home to Thomas’s fledgling New World Symphony these last 20-odd years before embarking on a new chapter in the organization’s musical life.

Ten-time Grammy winner Michael Tilson Thomas will appear as guest conductor of the Chicago Symphony Orchestra November 4,5 & 6 in a program of Barber, Ives and Gershwin. There will also be a Pre-concert Bonus Organ Recital by Paul Jacobs.

Maestro Thomas will also appear in Chicago November 2 at an inaugural fundraising event at Symphony Center entitled Fall In Love With Music. It will feature an afternoon appearance by Maestro Thomas, where he will comment on the music of Gershwin, Ives and Barber. There will also be a champagne reception and luncheon, followed by a chamber music performance of string quartets by the composers, performed by the Lincoln Quartet, a resident string quartet consisting of members of the Chicago Symphony Orchestra. For tickets and information, visit www.cso.org.

Posted by Dwight the Connoisseur at 10:44 PM