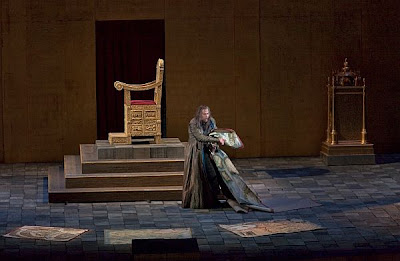 Metropolitan Opera’s sweeping epic, Boris Godunov by Modest Mussorgsky, was the second Met: Live in HD presentation in theatres around the globe, with an Encore presentation scheduled for Wednesday, November 10 at 6:30pm. Although the production is four and a half hours long, it is so absorbing that the time seems to fly by. The production by Steven Wadsworth is minimalist, by Met standards, but taut, with great dramatic pacing and a terrific cast of singers. German bass-baritone Rene Pape gives the performance of his career, particularly in the mad scene at the end of Act II. It is one of the finest moments of the season. Commenting on the just completed performance during a backstage interview with Met backstage reporter and Met soprano Patricia Racette, Director Stephen Wadsworth described Pape as “a thoroughbred. When we let him out of the gate, he seizes the role and runs with it. There’s no stopping him once his power is unleashed.”

Set designer Ferdinand Wogerbauer provided a bleak, almost blank canvas landscape that allowed the complex drama unfold without any distraction. Where sets may have receded in importance, the costumes by designer Moidele Bickel more than made up for it. They were lavish and colorful with a fullness of expression that matched the over-the-top passions of the characters.

Based on the novel of the same name by that great chronicler of the Russian experience under Tsarist rule, Alexander Pushkin, the story tells of the ill-fated reign of the late 16th century Czar, Boris Godunov, who allegedly came to power after ordering the assassination of the young heir-apparent. The specter of murder hangs in the air and eventually drives Godunov mad. Before he succumbs, he prays for forgiveness and places his son on the throne.

There were impressive performances throughout. Tenor Aleksandrs Antonenko was the most stellar of the virtually all-Russian cast (with the exception of Pape, who is German). His silvery tenor voice seemed to gleam in the upper register in his role as Grigory/Dimitry. His rapacious lover, Marina, sung by mezzo-soprano Ekaterina Semenchuk, best summed up her own performance in the one-word answer she gave to backstage interviewer Racette; “Sexy!”

Bass Vladimir Ognovenko gave a lively performance as the errant monk Varlaam and Tenor Andrey Popov knit the whole thing nicely together with his conscientious reading as The Holy Fool. Boy alto Jonathan A. Makepeace showed the promise of a great operatic talent in the making as Godunov’s son Feodor.

Conductor Valery Gergiev, a veteran of countless performances of Russian repertoire and a frequent collaborator with Rene Pape, did a stellar job of bringing Mussorgsky’s forceful score to life. “At times we are leading the singers,” Gergiev told Racette backstage. “Every step of the way its important that we keep the story moving.” Mission accomplished!

Boris Godunov encores the Met Live in HD series Wednesday, November 10 at 6:30pm. Performances at the Met continue through March 17. The opera was so compelling that I plan to be there in person for one of the final fall performances at Lincoln Center.

Posted by Dwight the Connoisseur at 12:23 AM