Immerse yourself in Merce (Cunningham)! 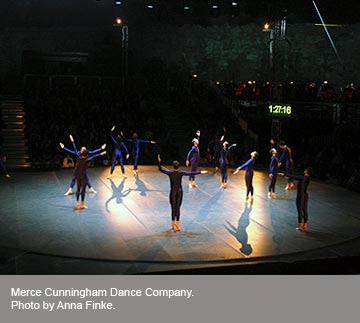 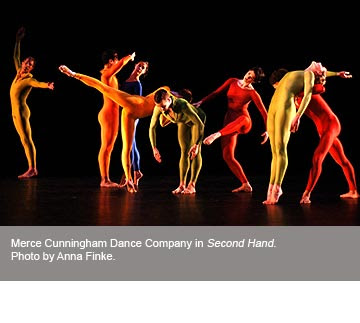 Immerse yourself in Merce!

Miami--Total immersion was the order of the evening at the recent concert by Merce Cunningham Dance Theatre at the immense Ziff Ballet Opera House at the Adrienne Arsht Performing Arts Center in downtown Miami.

This once-in-a-lifetime performance, entitled Immerse yourself in Merce! featured the collaboration of two undisputed giants of American culture, Choreographer Merce Cunningham and visual artist Robert Rauschenberg. The astonishing event re-imagined their legendary mid-20th Century collaborations from every angle and perspective in an astonishing 360-degree event that made the audience a part of the show.

First of all, those expecting a polite evening of nostalgic retrospective of the long and groundbreaking 70 plus year career of the dance innovator were in for an instant reality check. Ushers led audience members through the auditorium, past rows of seats that were piled practically to the ceiling with white geometric shaped boxes and balloons by Installation Artist Daniel Arsham, to the darkened backstage area.

The backstage was divided into three performance areas, the largest being a rectangular pit where the biggest group of dancers held forth. Performance areas were also demarcated by grey runners, which served as subtle barriers to the audience, who were invited to move freely among the performers so long as they did not cross the grey ‘lines.’

In between ‘numbers,’ the dancers stretched and did their warm-ups in the midst of audience members. It truly felt as if the lines had been blurred between the dancers and those who came to watch them.

Merce Cunningham died in July 2009 at age 90. He appeared in every single performance of his dance company until 1979, when he was 70. He observed his 80th birthday in 1989, by dancing a duet with Mikhail Baryshnikov, although frail and holding onto a barre. The company continues to tour internationally and to hold Repertory Classes at the Baryshnikov Arts Center in New York.

Cunningham was at the forefront of the American avant- garde for more than a half century and his specter seemed to imbue the 14 dancers with his innovative spirit. The dancers contorted themselves into geometric poses that seemed to defy the laws of physics and human anatomy. Dancing solo, in pairs and in small groups, they performed lifts, lunges, turns, twists, curls, arches, jumps and tendu in rapid succession. The total experience was a virtual clinic in the Merce Cunningham Method, which emphasizes highly emotive expression through movement.

Robert Rauschenberg died in May 2008. A National Medal of Arts recipient in 1993, he was a painter and sculptor who often worked simultaneously in both mediums. His frequent collaborations with dancer Cunningham and musician John Cage created some of the most all-encompassing performance experiences of the mid-Twentieth Century.

Off to the side, a percussion artist and a lone violinist, whose instrument was electronically attached to a computer and audio panel, performed on a series of otherworldly instruments that looked like oversized set pieces from a Star Wars movie. The instrumentalist later informed me that he was also a sculptor who had once worked as an assistant in Rauschenberg’s studio.

The iconic artist was well known for his artistic “Combines” which employed non-traditional materials and found objects in a series of unorthodox combinations that expanded the medium of sculpture. The instruments present at ‘Immerse yourself!” reflected his “oeuvre.”

The performance was both a tribute to the Cunningham/Rauschenberg legacy and a demonstration of the vibrancy and endurance of their collaborative spirit and vision. Certainly, after experiencing the nearly hour-long set, a night out at the theatre would never be the same. The performance lived on in flashes of memory long after the last demi-plie, pique and pointe had been executed.

Posted by Dwight the Connoisseur at 2:23 AM