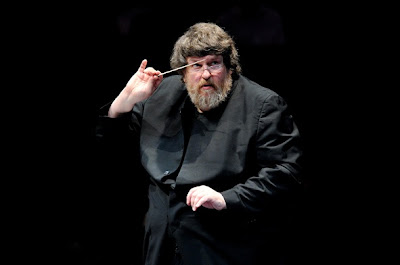 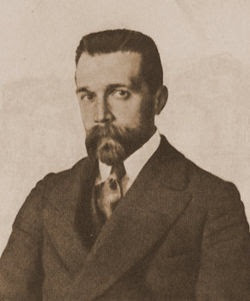 Miami—The esteemed British composer and conductor Oliver Knussen was guest conductor for one of the final offerings of Maestro Michael Tilson Thomas’s New World Symphony in its outgoing home at South Beach’s Lincoln Theatre. The orchestra is set to move into its new, dazzling Frank Gehry (Guggenheim Museum, New York and Bilbao, Spain) designed campus in January, with a week of gala concerts conducted by the Maestro.

Knussen’s program included his own Scriabin Settings, after the iconic Russia master, composed early in his career in 1978 and works by two living composers, the U.S. premiere of Concerto for Violin and Orchestra with 2008 MacArthur Foundation “genius grant” Fellow Leila Josefowicz as soloist, written by fellow British composer and long-time collaborator Colin Matthews, who was on hand to discuss his work and young American composer Sean Shepherd whose headlining composition, Wanderlust was premiered as a commission for the Cleveland Orchestra in 2009.

Knussen is a house of a man with a courtly manner and scholarly way of talking. The former head of contemporary music activities at Tanglewood and composer-in-residence with the Chamber Music Society of Lincoln Center has now established the Contemporary Composition and Performance courses at the Britten-Pears School in Snape, England along with collaborator Matthews.

Accustomed to lecturing, Knussen’s lengthy introductory explanation of the Matthews piece prompted one audience member to shout “May we please just HEAR it!?” Knussen responded, tongue in cheek,” not just yet, Darling!” which brought a hearty laugh from the audience.

Its not often that an audience is privy to the thoughts of the composer at a classical concert, so the presence of Knuseen, Matthews and later, Shepherd in explanatory mode, made for an enriching concert experience.

The stunning Josefowicz made an exceptional case for Matthews’ Concerto for Violin and Orchestra, attacking the angular, ascending melodies of the composition with alacrity. Her impeccable technique and organic understanding of the material made for a mesmerizing performance.

Shepherd, the self-described “more diminutive of the composer’s here tonight,” proved a towering figure on the manuscript page. His musical journey through time and space provided vivid imagery of distant memories and reflections of his youth, including memories his family and his travels to places as far flung as Berlin, London, the French Mediterranean Coast, the Eastern Shores of Britain, Los Angeles, Upstate New York and his childhood home in the Nevada desert.

The final movement, Bilbao, made musical reference to NWS campus architect Frank Gehry’s funky design for the Guggenheim Museum in Northern Spain, which he built in the 1990s.

“The music reflects the design of the museum, which has all of these intricately conceived compartments built all around a central courtyard. The music I wrote has a central core around which its many diverse themes evolve. Its also a tribute to my Basque ancestry and the notion of a past so deep, it may be lost already. The music goes down all of those diverse paths, then just disappears like a long-forgotten memory.”

The final work, Symphony No. 10 by Nikolai Miaskovsky, composed in 1927, payed fitting homage to this Russian master whose musical legacy was virtually obliterated from the pages of history by the Communist Party. Miaskovsy’s tone poem was inspired by the great Alexander Pushkin’s poem The Bronze Horseman, which tells the story of a chaotic flood that overtakes St. Petersburg and kills the fiancé of the young protagonist Evgenii.

The statue, on its massive bronze steed, comes to life and chases Evgenii, who drowns in the flood. How Russian! As a piece of music performed at the opening days of the Holiday Season, it is the perfect tonic for those predisposed to extreme ennui at the prospect of a concert season dominated by the treacle of fellow Russian composer Pyotr Ilyich Tchaikovsky’s “The Nutcracker.”

Posted by Dwight the Connoisseur at 3:22 PM