Jazz at CSO: Regina Carter travels a "Reverse Thread" through the African Diaspora 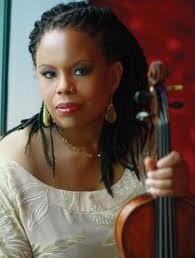 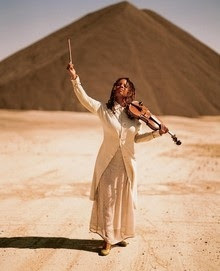 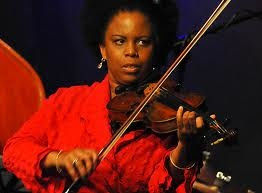 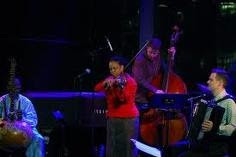 The SCP Jazz Series at Chicago Symphony Center, Sponsored by Harris Bank, presented one of its most absorbing and adventurous concerts to date. Featuring MacArthur Foundation “Genius Grant” awardee, jazz violinist Regina Carter and her quartet of world music authoritarians, Yacouba Sissoko on the ancient African “griot” instrument, the Kora, a scintillating Alvester Garnett on Drums & Percussion, Chris Lightcap on Bass and fellow-virtuoso Will Holshouser on Accordion.

Judging from the capacity audience, that even crowded themselves amongst the speakers on the Terrace behind the stage, Carter’s message, that embraces elements of traditional African music, folk music, blues, spirituals, jazz and classical music, has struck a chord. It was the most diverse audience to ever grace a Symphony Center concert. Its members were more than half African American, with a healthy representation of young people and types from the Lincoln Park, Lakeview area. The decision-makers of the CSO, who are endlessly seeking ways to increase the audience base for its Symphony programs, would serve their purpose well by considering the inclusion of such adventurous programming in the normal subscription series. Perhaps a commission for Carter to write a Symphony for the CSO, in the manner of the one recently presented by trumpeter Wynton Marsalis, would be a welcome addition to any future season lineup.

Carter’s quartet preceded a performance by Esperanza Spaulding’s Chamber Music Society. Her stop at Symphony Center was in support of her new album “Reverse Thread” and is part of a world tour through 2011. Carter funded the project with a $500,000 no-strings-attached 2006 Fellowship from Chicago’s MacArthur Foundation.

Where Carter’s past musical efforts forged a fusion between the worlds of jazz improvisation and the music of Ravel and Debussy, this effort plants its feet firmly on African soil and the bedrock of Black American music forms. The opening number combined an African folk tune, Juru Nani (Starry Night) with the traditional African American Spiritual “God Be With You ‘Till We Meet Again.” Her amplified violin (a modified Sotioni) played the sparse melodies in restrained fashion, letting the pure emotion of the music and the rich embellishment of her percussion instrumentalists shine forth. The similarities of the emotional content of the music became more evident as she played.

The next offering, Artistiva, turned out to be the most texturally complex music of the evening. It allowed Carter to express the commanding power of her virtuosity, displaying the flashy cadenzas that won her accolades as a performer and the respect of audiences and her peers in both the classical and jazz genres.

Next came the most haunting melody of the evening, and one of the most representative of her current musical journey, the song N’teri, which means ‘My Friends’ or ‘Friendship,’ composed by Habib Koite of Mali. As interpreted by Carter, the song consists of a beautifully expressive melody, which Carter played as if caressing each string of her violin. The piece wove an intricate tapestry of rhythm and melody with the support of Sissoko on the Kora. Both the contrast and kinship of the two stringed instruments were striking. Juxtaposed against each other, they created two distinct waves of sound that at times conjoined and then diverged.

Sissoko later explained to the audience that the Kora was made from a gourd, covered with calves skin with African rosewood used for the neck and nylon strings in place of the traditional Antelope gut. “We like to use the nylon, because we can first use it to go fishing, then to play music.” The first recycling!

Accordionist Holshouser was Carter’s equal in every way, both as a technical virtuoso and solid interpreter of the music. It was a joy to hear the two jam together. You could feel their simpatico and high energy.

Carter concluded the set wit the piece, Mwana Talitambula,’ in which she first played a field recording of a tribe of practicing Jews from eastern Uganda. “The men play a type of instrument, similar to the accordion” she explained from the stage “which women are not allowed to play. In this culture, the roles are somewhat reversed, because the women get to play the drums.”

Carter’s use of the field recording to inspire composition is reminiscent of the early twentieth century composer Bela Bartok’s use of wire recordings he made of Magyar folk melodies in the countryside of his native Hungary, which he used as the inspiration for his symphonies.

Carter’s efforts with Reverse Threads are similar in many ways to the work of Chicago Symphony Orchestra Creative Consultant, superstar cellist Yo Yo Ma and his Silk Road Project. Carter’s Reverse Threads explores the African Diaspora in much the same way as Ma’s efforts explore the many divergent paths of Eastern music. The two have done a great deal to expand the definition of modern music by reaching back into its ancient roots. Hopefully Carter will be a recurring presence on the Armour Stage once her world tour is completed to share more of her much-needed musical message.

Posted by Dwight the Connoisseur at 9:30 AM