Brothers of the Dust: Greed and Hubris in the Age of Civil Rights 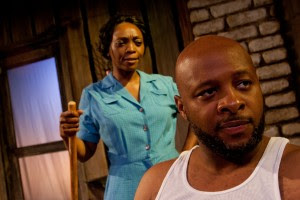 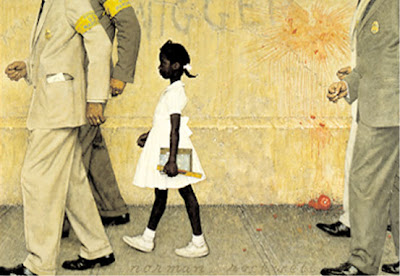 Combine the heady, greed-driven desperation caused by Big Oil in Paul Thomas Anderson’s Academy Award-winning 2007 film There Will Be Blood, with the family entanglements, conflicts and moral depravity of Tennessee Williams’ Pulitzer Prize-winning play A Streetcar Named Desire and you have the underpinnings of Darren Canady’s superlative production, Brothers of the Dust, now onstage at the Chicago Center for the Performing Arts, 777 N. Green, presented by Congo Square Theatre Company through June 26.

The acting is terrific and the directing by Daniel Bryant keeps the pacing tight as the play moves like a hurricane through its two and a half hour length. Stage Manager Razor Wintercastle, Scenic Designer Andrei Onegin, Lighting Designer Casey Diers and Properties Designer Jesse Gaffney make the most of the production’s minuscule performance space and minimal set. Sound Design by Rick Sims heightens the drama of key scenes and serves to underscore the denouement to the plot. Music is an integral part of the action and selections from Howlin’ Wolf, Big Momma Thornton and other blues legends of the late ‘40s and early ‘50s add pithy undertones to the play’s steamy, Deep South atmosphere.

The story takes place on the Colton family farm in the Ozarks sometime during the late ‘50s (brother Ollie references the Little Rock Nine, whose effort to integrate Central High School in Little Rock, Arkansas in September, 1957 prompted President Eisenhower to send members the 101st Air Airborne Division to escort each of the children, individually, into the school. The event is the subject of a famous Norman Rockwell painting, The Problem We All Live With, which began as a Look magazine article illustration and was later displayed at the Guggenheim Museum in New York and now resides in the Norman Rockwell Museum at Stockbridge). The story takes place amidst the continued exodus of upwardly mobile African Americans seeking to escape the horrors of Jim Crow.

The irascible Roy Colton has both his ire and suspicions raised when his two brothers. Ollie and Wilson, return unexpectedly to the family farm. Both had run North to escape the quicksand of poverty and racism that seem to have consumed Roy. Neither brother achieved the success he had hoped for. Dreams having eluded them, they returned home with hopes of cashing in on the promise of oil wealth beneath the rich, dark soil of the Colton farm. White speculators, in the form of surveyors, loom offstage as a constant, ominous presence.

James Alfred raises Roy’s vainglorious rantings, with all their twisted logic and explosive profanity, to an almost Shakespearean level. He is at once possessed by the blinding jealousy of an Othello and the regal delusions of King Lear. In spite of his assertion that he is the master of his domain, he, as his long-suffering wife Mayetta (played with magnificent, Ruby Dee-like intensity by Shanesia Davis) proclaims is enslaved by the almost supernatural hold that the land has over him. So enraptured is he by the land, that Roy is willing to dash the hopes and dreams of his only son, Jack (an energetic Edgar Miguel Sanchez) who strives to gain a college scholarship against his father’s wishes.

Roy will do anything to preserve the integrity of the Colton farm, even if it means tearing the family apart. He is not above destroying everything and everyone in his path, be it emotionally, or, as in one tense moment, physically, to impose his will.

His uncle Wilson (a superbly devious Anthony Irons) sets the skullduggery in motion by manipulating young Edgar into betraying his father’s trust. Brother Ollie, a Langston Hughes wannabe, on the run after some shady dealings in Chicago, has hooked up with the daughter of a prominent black newspaper publisher and has dragged her down home with the hope that she’ll buy into the family’s murky mess. Not surprisingly, he has an embarrassing secret that is violently brought to light.

Tracey Bonner as Ollie’s black princess girlfriend, Audra, delivers some of the most dramatically telling lines of the play and Velma Austin Massey as Wilson’s streetwise and tell-all wife Nella, drips venom as she spouts off the play’s sassiest lines with relish.

The play is currently Jeff Recommended and it wouldn’t be at all surprising if it were nominated for a Jeff Award for Best Drama. It certainly deserves a serious look by those who enjoy excellent stagecraft and the art of acting at its best. For tickets and show times, visit www.congosquaretheatre.org.

Posted by Dwight the Connoisseur at 2:22 PM