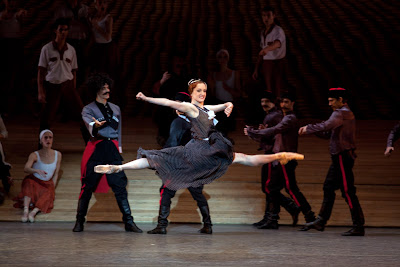 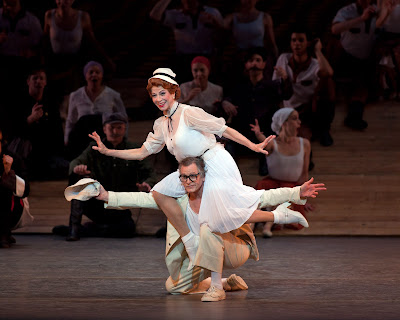 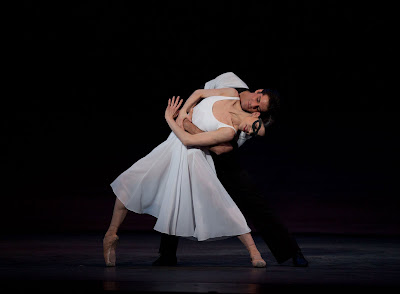 1.Gillian Murphy as the Ballerina in The Bright Stream. Photo: Rosalie O'Connor

New York-After the day’s record-breaking sweltering heat was broken by a welcome shower of more spring-like rain, American Ballet Theatre (ABT) held the New York premiere of the delightfully frothy comic ballet, ABT Artist in Residence Alexei Ratmansky’s The Bright Stream for the opening of its spring residency at the Metropolitan Opera House at Lincoln Center.

As masterful as it is colorful and imaginative, the work is a restaging of a Shostakovich ballet production first premiered in 1935 in Leningrad that had been banned by Stalin. Disgraced, Shostakovich never wrote another ballet and the original director, Fyodor Lopukhov was fired as director of the Bolshoi Ballet and the author of the scenario, Adrian Piotrovsky, was hustled off to the Gulag, never to be heard from again.

None of those stormy machinations were evident, however, in ABT’s heartfelt revival. The entire premise of Bright Stream seems to look at the past through a distorted looking glass that makes faults seem comically garish.

Conductor Ormsby Wilkins brings the most sparkling and dynamic elements Dmitri Shostakovich’s music to the forefront. Tempos are lively and the overall tone is awash with color. The sets by Ilya Utkin, coctumes Elena Markovskaya and lighting by Brad Fields convey both the social context of the ballet and its underlying themes which glorify the life of workers on the collective farm and role of the artist in nurturing the proletariat spirit. The central theme of the ballet involves reconciling the role of the artist with that of workers in the farm collective.

Much of the psychological ethos of Bright Stream is lost on today’s audiences, but they seem to revel in the lighthearted antics of the lithesome dancers onstage.

There are a number of scenes in which the sheer artistry of the dancers seem larger than life. Gillian Murphy as the Ballet Dancer, dazzled early on and David Hallberg as the Ballet Dancer, kicked it into high gear. Paloma Herrera is luminous as Zina, the local amusements organizer and Marcelo Gomes gives it his all as Pyotr, her agricultural student husband. A later Ballet Trocadero-like romp by some cross-dressing dancers in Act II stole the show! Also, you’ve gotta love the cycling dog. The waltz by the corps du ballet was one of the best I’ve seen by any company. The dancers of ABT are truly a gifted lot. As for the tone of the entire ballet, it could not have been carried off better.

The Bright Stream was a delightful evening of dance from beginning to end. As the curtain fell on the field workers gathered for the final scene of the harvest festival, the audience seemed reluctant to leave. ABT continues is spring season at the Metropolitan Opera House with The Bright Stream through Jine 20 and Coppe’lia June 16-20, Cinderella June 21-25 and Swan Lake June 27-July 2, and Sleeping Beauty July 5-9. Next, ABT traels to the Los Angeles Music Center, Dorothy Chandler Pavilion, Jule 14-17 and then to Japan, to perform in Tokyo, Hyogo and Shiga, July 21-31. For tickets and information, visit abt.org.

Posted by Dwight the Connoisseur at 1:12 PM