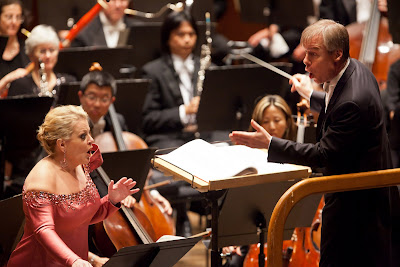 New York-Deborah Voigt received a rousing ovation the moment she walked on stage for the New York Philharmonic’s performance of Arnold Schoenberg’s Erwartung (Expectation), a Monodrama in One Act, conducted by David Robertson.

She looked stunning in a mauve gown, accented with a splash of bright silvery sequins across the upper bodice, designed by Henry Schickerling of TOSCA New York. Her voice was even more so, with its rich, caramelized mezzo undertones (she was once tutored by Leontyne Price. It shows.) Her appearance was a welcome departure from the warrior-princess garb she wore as Brunnhilde, in the Met’s recent production, Die Walkure.

It all began idyllically enough; a woman wanders through a verdant expanse in search of her lover, reflecting upon the sightings of birds and the smell and rustle of leaves and grass along the way. Quickly, the listener realizes that they are being plunged into the dense psychological forest of a mind engulfed in Freudian delusional hysteria. The woman stumbles upon his bleeding corpse. Without too much of a creative leap, it quickly becomes evident that she, in fact, may be the murderer.

Such are the psychological underpinnings of Schoenberg’s unsettling vocal drama. Based on a libretto by Marie Pappenheim, a former medical student turned poet. The story she wrote was loosely based on a famous chapter in Freud’s book, Studies on Hysteria, The Case of Anna O, a patient of Freud’s co-author, Josef Breuer, who was, coincidentally, a relative of Marie Pappenheim.

Add to that story the layering of Schoenberg’s own personal experience of his wife’s brief liaison with a friend and collaborator Richard Gerstle, whose failed career as a painter and failed romance resulted in him tragically ending his life in dramatic fashion. He turned himself into his final piece of visual performance art by stabbing and then hanging himself in front of his studio mirror. Those dear readers are, in a nutshell, the less than cheery facts surrounding Erwartung.

Voigt plunges us directly into the icy atmosphere of Schoenberg’s torturously esoteric meanderings. She scales the chromatic crevasses without the aid of guide rope or Sherpa, daringly grasping the highest tonal peaks with ease. Her mastery as an interpreter of modern repertoire was evident as was her perfect pitch. She was

What preceded Erwartung were two examples of guest conductor David Robertson at his best. He delivered Shostakovich’s Symphony No. 1 with all of the dance-like, youthful fervor with which it was written. Shostakovich was barely out of Conservatory and on his way to becoming Russia’s most revered, and at times, reviled, composer. His stormy relationship with Stalin had yet to materialize, but the magnificent expression of Soviet temperament, pride and spirit were evident in its declamatory themes as expressed in the ringing trumpets and sonorous strings. Even the tonal percussion of the timpani was utilized to its fullest to introduce a theme that would be replicated throughout the piece.

Rachmaninoff’s The Isle of the Dead, Symphonic Poem, was Robertson’s interpretive personal best. He conveyed through musical impressionism the visual colors and textures of Swiss symbolist artist Arnold Bocklin’s painting Toteninsel (Isle of the Dead). The painting depicts a ghostly figure transporting a coffin in a boat to a rocky outcropping that is more mausoleum than land mass. Robertson and the New York Philharmonic gave an inspired reading of this otherwise somber tone poem.

For information on upcoming performances of the New York Philharmonic, visit nyphil.org.

Posted by Dwight the Connoisseur at 6:03 AM