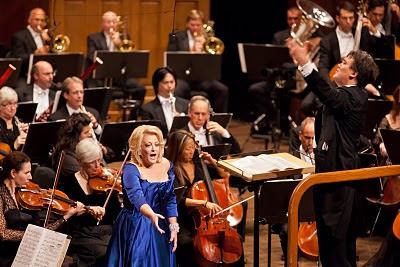 NEW YORK—The patina of a late summer rain dampening the plaza near the Dancing Waters of Lincoln Center Plaza, making the patrons rushing inside Avery Fisher Hall look like subjects in a painting by Caillebotte, did little to dampen the enthusiasm over what was to transpire inside. It was the start of the 2011-2012 New York Philharmonic season, with super-soprano Deborah Voigt making an appearance across the plaza from her usual home at the Met to lend a bit of opera glamour and prestige to the start of Maestro Alan Glbert’s third season as Music Director of the New York Philharmonic Orchestra in a program to include her singing Samuel Barber’s and the final scene from Strauss’s Salome.

Ms. Voigt looked stunning as she swept onstage in her regal blue gown and launched into the angular strains of Samuel Barber's Andromache's Farewell without so much as a nod to the thunderous applause that greeted her. A knowing smile crept across her face as she looked toward the podium. It was all clicking. This was to be a performance for the ages, made even more indelible by the live PBS broadcast and subsequent internet streaming webcast that would continue through the week. Hard on the heels of Gilbert and the New York Phil’s performance of Mahler’s Second in the Concert for New York, commemorating the tragedy of 9/11, this was also to be the maestro and the orchestra’s finest hour. With the world’s attention riveted on the Avery Fisher stage and one of the world’s finest orchestras and the music world’s leading vocalist just beneath his baton, Maestro Gilbert had asserted himself as one of classical music’s finest conductors. The orchestra could not have sounded better and been more in synch with its conductor and soloist.

Gilbert and the orchestra sparkled from the outset. After the customary season-opening Star Spangled Banner, the orchestra tore into Samuel Barber's Overture to "The School for Scandal." Their later Overture to Wagner's Tannhauser showed the flawless power of the brass section's unified playing. It was thunderous to behold.

Strauss's Dance of the Seven Veils set the stage for the vocal fireworks that were to follow.

Ms. Voigt’s ability to shift gears (and gowns) to rise to the dramatic occasion of Salome's final mad scene was nothing short of astounding. She scaled the heights of Strauss’s challenging vocal peaks with ease and reached its dramatic crescendo without overplaying her hand. It was a measured performance with just the right amount of tension leading up to the final moment of complete madness, when she kisses the mouth of the severed head of John The Baptist. Her expression and the resonance of her voice convey the horror of the moment, without taking it over the top. It was hair-raising and brought the audience to its feet. The performance was broadcast live on the PBS network and streamed on the New York Philharmonic's website at www.nyphil.org.

Posted by Dwight the Connoisseur at 6:48 PM