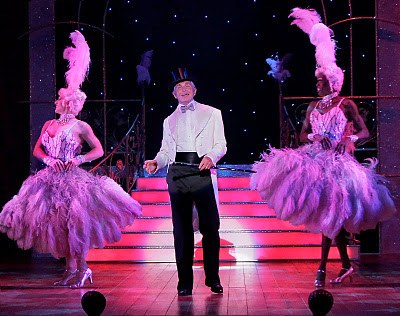 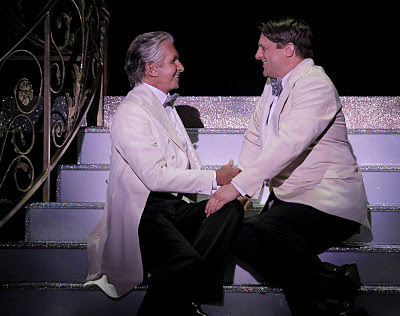 “I Am What I Am,” A Polished Broadway Gem

Photos by Paul Kolnikstud for Broadway In Chicago

-George Hamilton (Georges) and Christopher Sieber (Albin) in the finale

Broadway in Chicago’s current production of La Cage Aux Folles has the look and feel of a polished Broadway show, and with good reason. The majority of the cast are veterans of at least one of its several Broadway incarnations, including one of its stars, Christopher Sieber, who plays the centerpiece character, Albin, the self-described “one transvestite homosexual,” who provides the dramatic fulcrum for the musical. Indeed, it is Sieber, in the person of Albin, who delivers the show-stopping anthem, “I Am What I Am” at the end of Act 1, which serves as the emotional heartbeat of La Cage Aux Folles, at Chicago’s Bank of America Theatre, through Jan. 1, 2012.

Christopher Sieber starred in La Cage on Broadway as the character Georges, who is played in Chicago by the venerable actor George Hamilton.

A 50 -year veteran of film and television, Hamilton, is a living monument to his profession. He plays Albin’s “male” partner, with dignity and aplomb. In addition to his encyclopedic film and television credits, he has distinguished himself on Broadway, playing the starring role of Billy Flynn three times in the smash hit Chicago. There are key moments in La Cage that offer a window into the inner genius of his skills as a performer. Hamilton employs a dramatic pause in several scenes that allows his character’s ‘voice’ to speak volumes. He achieves in silence, an eloquence equal to the words of Harvey Fierstein’s often poignant script.

Georges (Hamilton) is the proprietor of the French Riviera nightclub of the title, which is the setting for the racy transvestite revue that stars his life-partner, Albin (Sieber). The two have raised a son, Jean-Michel (Billy Harrigan Tighe), whom Georges sired in a drunken one-night stand with a chorus girl at the Lido in Paris, where Georges once starred. Georges and Albin’s sequin-covered world is suddenly rent asunder when Jean-Michel announces that he is about to be married and wants to bring his fiancé, Anne (an ebullient Doris-Day-ish Allison Blair McDowell) and her arch-conservative parents, the Dindons (an irascible Bernard Burak Sheredy and a comically inept Cathy Newman) home.

M. Dindon is a right-wing politician, running for office on a platform based on his crusade against the libertine elements that run rampant in the south of France. His avowed mission is to eradicate transvestite clubs and their ilk from the face of the earth. With a substantial dowry at risk, Jean-Michel wants Albin gone from the premises, so that he can bring the girl’s parents into a seemingly ‘normal’ home. (Albin later delivers one of the great, standout lines of the entire evening, when he tongue-in-cheek (pardon the pun) mangles Dindon’s name, calling him “Ding-dong.”)

Albin, who raised Jean-Michel, is understandably crushed. Hamilton reprimands his son and shames him through the moving song “Look Over There.”

Georges attempts to smooth things over with Albin over a rare lunch at an outdoor café on the Promenade, and sings the lovely “Song on the Sand.” It’s hard not to hear the great Gene Barry’s voice in the back of your mind on that one, but Hamilton comports himself ably. Although his voice wavers at time, he sings with conviction and delivers the lyric with authority. He’s a master at ‘selling’ a song, as evidenced in the comic scene that incorporates the song, “Masculinity,” in which Georges attempts to teach the effeminate Albin to adopt the mannerisms and ungainly walk of John Wayne, with hilarious results!

The club’s male chorus dancers, “Les Cagelles” are a consistent delight throughout the performance. We hear them singing, in cabaret cadence, “I Am What I Am, and what I Am is an illusion,” although we can see the pecs and biceps under all the pasties and sequins and a distinct “package” under the g-strings. Their athleticism particularly comes into focus in the “Birdcage” dance that opens the second act. Jeigh Madjus as the “butler (maid)” Jacob is a sassy bundle of comic energy throughout.

If you’ve tired of the marathon of Holiday treacle and commercialism, La Cage Aux Folles is a welcome tonic, which treats a sensitive subject with humanity and humor. It gives the Holiday chestnut “Peace on Earth, Goodwill toward Men” a deeper and more universal meaning.

Posted by Dwight the Connoisseur at 6:25 AM