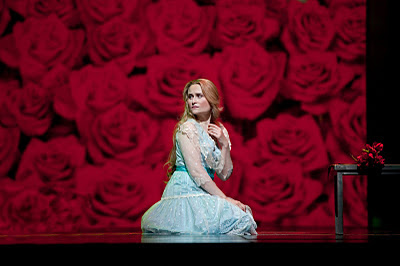 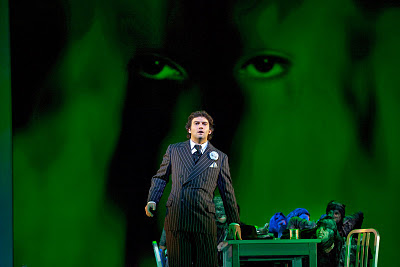 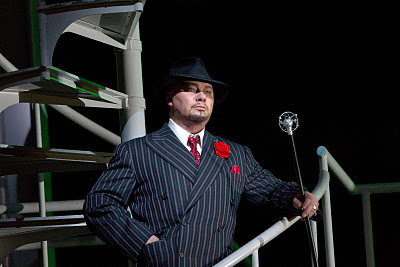 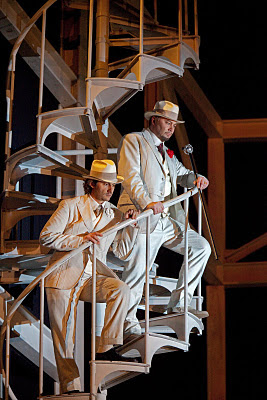 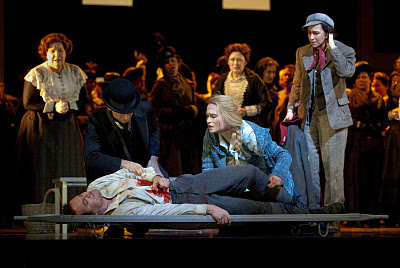 -Faust and Mephistopheles dress to the nines before sealing their deal

A “magnificent ride!” is how two-time Tony Award Director Des McAnuff described his Metropolitan Opera production of Gounod’s Faust, seen by audiences in movie theatres worldwide in Met Live HD. McAnuff, winner of the Tony Award for Best Director of a Musical in 1985 for The Big River and again in 1993 for The Who’s Tommy and who was nominated for Jersey Boys in 2006 (which won the Tony Award for Best Musical that same year), and conductor Yannick Nezet-Sequin, helmed a stellar cast of actor/singers, led by the charismatic German tenor Jonas Kaufmann, Musical America’s 2011 Vocalist of the Year, in the title role and Dresden doll beauty, Russian soprano Marina Poplavskaya as the idealized object of his headlong affection, Marguerite. Seguin revealed to backstage host, Met soprano Joyce DiDonato, that he would be driving to Philadelphia immediately after that afternoon’s performance to conduct the Philadelphia Orchestra, where he is Music Director Designate, taking up the full title of Music Director in the New Year.

McAnuff, in his Met Debut, takes the story from its original setting of the ancient world of author Johann Wolfgang von Goethe, and updates it to the Atomic Age of 1945. The sparse sets and military garb (brilliant costumes by Paul Tazewell) of the Met Opera Chorus and dancers (who are an intricate part of this superlative production, under Chorus Master Donald Polumbo), with striking use of looming video segments, provide the stark backdrop for the gripping action onstage. Large, full-faced portraits of the principles alternate with gigantic red roses and Georgia O’Keefe clouds to create a moving video subtext to the melodramatic story of Faust’s descent into moral bankruptcy as a result of his deal-with-the-devil.

In one powerful scene, the male chorus is dressed as war wounded, fresh from the battlefront. Their distressed look and forceful vocalizations make a powerful statement on the horrific human cost of war.

“I was struck by the writings of Rita Bronowski, the widow of the great anthropologist, (as well as scientist and philosopher) Jacob Bronowski, and her account of his visit to Nagasaki, Japan, where he witnessed the destruction caused by the atomic bomb and he pronounced to himself and the world ‘never again.’ I thought this was a quintessential moment. So, when Peter Gelb approached me about doing the opera, I thought I would use this as a framing device to present this magnificent opera. I thought I would have more of a secular take on the story, and give it a more contemporary context which I feel is more relevant to modern day audiences, yet is also true to Gounod.”

Faust begins with him alone in his lab contemplating suicide. A parade of dark shrouded choristers crosses in the background and a large video close up of Marguerite soon looms in the background. Faust curses God. Enter Mephistopheles (German bass Rene Pape), in all his white suited Dandyism) who offers Faust riches, power and glory. Faust will have none of it. He instead wants the “desire, enchantment and innocence of youth.” Mephistopheles agrees, but at a price-Faust’s soul. The duet between Kaufmann and Pape at the end of Act I, after the deal is signed, is one of the sublime moments of the entire opera.

Marina Poplavskaya’s voice and her vivid portrayal of the maddened Marguerite is one of the great tragic portrayals of this Met Opera season. Her voice seemed to gain intensity as she turned up the emotional heat, leading to her psychological unraveling, her horrific crime and eventual punishment and redemption. Canadian lyric baritone Russell Braun was spirited as the swashbuckling Valentin. The well-choreographed sword fight between he and Kaufmann/Faust, by Fight Director Stephen Rankin, seemed all too real, and served to heighten the dramatic tension of the opera.

Fifty countries participate in the Met’s Live in HD transmissions, which gave members of the international cast a unique opportunity to address their home audiences in their native language during their backstage interviews with Joyce DiDonato. Backstage interviews and video segments and behind-the-scenes glimpses of rehearsals and the creative process surrounding Met Opera productions are a feature exclusive to Live in HD patrons, and a great reason to revisit Faust, which will be shown in an Encore Presentation Wednesday, January 11 at 6:30pm. Check your local listings for theatre locations. The next Met Live HD presentation is The Enchanted Island, Saturday, January 21, 12:55pm Eastern Time, 11:55 am Central. Visit www.FathomEvents.com or www.metopera.org for details.

Posted by Dwight the Connoisseur at 8:47 AM