Broadway In Chicago: The Addams Family up to old wicked post-Holiday tricks 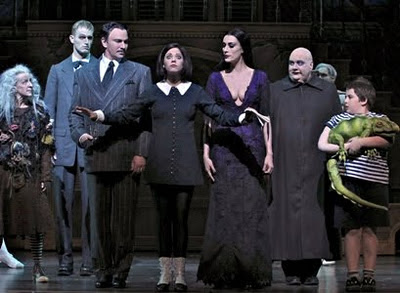 Broadway In Chicago: The Addams Family

The Addams family onstage at the Cadillac Palace Theatre, Chicago

While you’re out and about in the Loop, returning unwanted Christmas gifts, making exchanges and scooping up the myriad bargains, you might want to take a side trip to he Cadillac Palace Theatre on West Randolph and drop into the macabre world of The Addams Family. The weird, yet enchanting musical continues there for this weekend only, through January 1st. If you want to ring in the New Year on a bizarre note, this is the place to do it.

Hi-jinks kick off almost immediately when a disembodied curtain tassel scurries across the stage and the blood red curtain opens and the Company, in the guise of ashen graveyard denizens embark on a lively, high-stepping musical description of the plot scenario in “When You’re and Addams.” If you’re familiar with the multiple TV shows, movies or the original cartoon series by humorist and cartoonist Charles Addams for the New Yorker magazine, then you’re aware of the whacky events that will unfold. A scene change reveals the family patriarch Gomez Addams (an elegant, silver-voiced Douglas Sills) pondering his fate as the husband of Morticia (the sultry, darkly humorous Sara Gettelfinger) as he ponders the Byzantine ins and outs of his marriage in the humorous musical soliloquy “Trapped.”

By happenstance, the plot turns on an almost identical scenario as Broadway In Chicago’s La Cage Aux Folle, running concurrently at the Bank of America Theatre. In both musicals, a young adult offspring from an unorthodox family situation, plans to get married to someone outside their offbeat ‘culture.’ In La Cage, the parents are a gay male couple, in The Addams Family, they’re ghouls. In both cases, the offspring tries to convince the parents to masquerade as ‘normal’ for just one night, when they bring their fiancé’s parents home for dinner. In both musicals, the ensuing events are uproarious!

Patricia D. Kennedy is golden-voiced and beguiling as the plucky, rebellious daughter Wednesday, who is determined to get married a gushing Lucas Beineke (the valiant Brian Justin Crum). The one-liners and double entendres hinging on the macabre are gut-splitting. Some of the best lines are delivered by Uncle Fester (a disarming Blake Hammond) and Grandma (Pippa Pearthree). Victoria Huston-Elem uses her super-sonic voice and over-reaching physical comedy to deliver a scene-stealing number in the family ‘game’ scene, “Full Disclosure” during the comically disastrous family dinner at the end of Act One.

Sets & Costumes designed by Julian Crouch and Phelim McDermott do an effective job of conveying the dark, off beat world of the Addams family. The lively orchestra of local musicians Steve Leinheiser and Sean McNeely on Reeds, Andy Baker, Trumpet, Joe Sonnefeldt, percussion, Steve Roberts on Guitars, Scott Rosenthal, Bass and Steve Wnkler, Violin and Jocelyn Davis-Beck Cello, keeps the frantic action moving under the able conducting of Valerie Gebert. The Music & Lyrics and Arrangements by Andrew Lippa gives them plenty of lush material to work with.

Choreography by Sergio Trujillo and the superb dancing by the Company make this a visually stunning production.

The Addams Family makes the Kardashians seem like the Cleavers! There are only a few days left to catch all the blood-curdling shenanigans of the Addams clan. Visit wwww.BroadwayInChicago.com for show times.

Posted by Dwight the Connoisseur at 1:10 PM