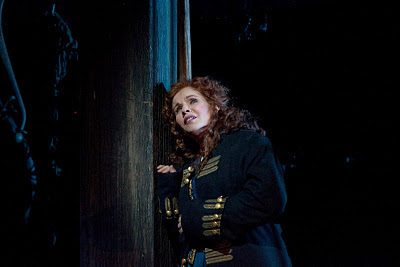 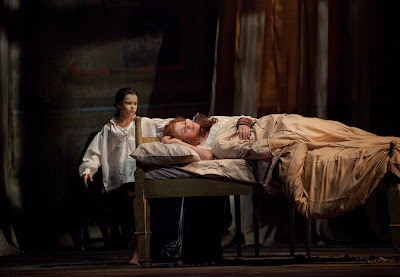 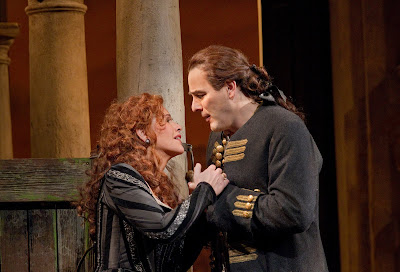 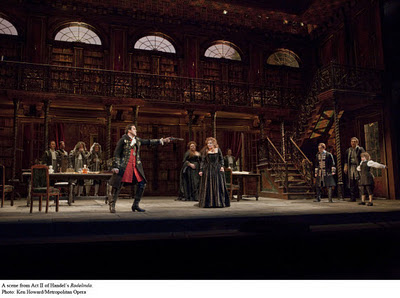 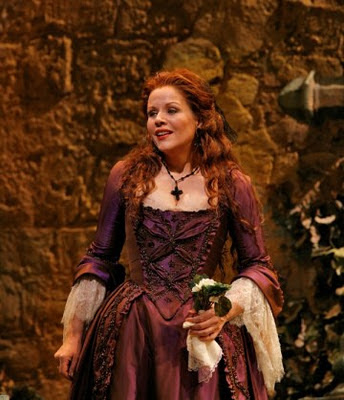 Reviewed by Dwight Casimere
Photos by Ken Howard/Metropolitan Opera
-Renee Fleming as Rodelinda
-Moritz Linn as son Flavio, Renee Fleming as his mother Rodelinda under house arrest
-Renee Fleming as Rodelinda and Counter-tenor Andreas Scholls as Bertarido
-Grimoaldo (Joseph Kaiser) makes a marriage offer-you-can't-refuse to Rodelinda (Renee Fleming)
-Renee Fleming is radiant in the title role
New York-Metropolitan Opera’s strongest roster of singers took to the stage and to movie screens around the world this past weekend in George Frideric Handel’s Rodelinda. Matthew Diamond was Director for Live Cinema in this sterling production. An Encore Performance is scheduled January 4, 2012 at 6:30pm local time. This Saturday, December 10, 2011 at 12:55 pm Eastern, 11:55am Central Time, the Met Live HD presents Gounod’s Faust, starring Jonas Kaufmann in the title role, Rene Pape as the devil and Marina Poplavskaya as Marguerite.

Stephen Wadsworth reprises his original 2004 Met premiere production as Director as does Renee Fleming in the title role. A luminous Stephanie Blythe as Eduige and Counter Tenors Andreas Scholl, as the deposed king Bertarido and Iestyn Davies as his loyal friend Unolfo, tenor Joseph Kaiser as the vain-glorious usurper Grimoaldo and Chinese Bass-baritone Shenyang as the villainous Garibaldo round out the gold medal cast.

Rodelinda, first performed in London in 1725, is considered one of Handel’s greatest works, right up there with Messiah. At its heart, it possesses a striking similarity to the Met’s preceding Live HD presentation of Philip Glass’s Satyagraha. Both operas, although separated by nearly 300 years, require exceptional singers with tremendous vocal stamina and range. There is a great deal of repetition in the vocal line, requiring detailed interpretation and subtlety of dramatic nuance. The score is also demanding because of its wide chromatic leaps that require a great deal of vocal athleticism. Only the most agile and preeminent of vocalists need apply.

Baroque specialist Harry Bicket conducted the Metropolitan Opera Orchestra, reducing it to a Baroque ensemble for the occasion and doing double duty, playing the harpsichord while conducting.

“The challenge to singers,” conductor Harry Bicket told backstage interviewer, Met Super soprano Deborah Voigt, “is to invest the music with real feeling and real emotions and for directors, like Stephen Wadsworth, to give a real sense of immediacy to what might seem like quite a static form and really make it into something quite gripping.”

Regarding the skill set required of singers that is unique to Handel, Bicket responded, “Technique. Technique. This is the most exposing music that anyone really has to sing. You are out there just singing a line, often with just a bass line, maybe with a few strings and violins. There are no trombones, no Wagnerian horns or tubas, no nice cushion of sound.

“It’s truly the most exposing thing. You really need a great technique. You have to have a great kind of musical intelligence too, along with fearlessness, and imagination! A lot of the words are being sung over and over again, so you have to find a way to find a reason as to why you’re saying it again, to give it new meaning.”

Conducting a scaled down version of the Metropolitan Opera Orchestra was also a challenge. “I think when you’re playing with modern instruments, it’s difficult anyway, and because, after all, these are not the instruments that Handel wrote for. We’ve augmented the standard strings and woodwinds with period instruments. We’ve added some Recorders, which were traditional in Handel’s operas. We’ve added the Theoboe, which is a long-necked, giraffe-like lute and we’ve added two harpsichords, one of which I’m playing, which adds a bit of Handel authenticity to the orchestra.”

Further authenticity is achieved through the use of male Counter-tenors rather than female sopranos or castrati in two of the lead roles. Counter-tenors Andreas Scholl and Iestyn Davies both made startling revelations in their backstage intermission interviews with Voigt. Both singers, surprisingly, speak in normal male baritone voices, although Scholl jokingly began his interview speaking in falsetto.

“Countertenor is not something you choose,” Scholl said, after transitioning into his normal speaking voice. “ There has to be a natural disposition to keep the head voice flexible throughout this vocal mutation. I grew up singing in a boys choir and when my voice started changing, I decided to make a change as well. When I was 16, I was actually planning on going into training to become part of a Counter-terrorism police unit in Germany. But my choir director marveled at my ability to continue to sing in the high tenor range well past puberty and persuaded me to pursue a singing career as a counter-tenor. So I went from Counter-terrorism to Counter-tenorism!” That play on words brought guffaws from both Voigt and the Live HD theatre audience at the AMC Empire 25 in Times Square.

Davies revealed that he actually began his career as a baritone, and sometimes worked his way up to being a tenor for certain roles. “Actually, I was a rather terrible tenor. You can hear from my natural speaking voice that it’s quite bass, sometimes lower! I never thought I’d be a counter-tenor, but when I tried it, it felt quite good. It's not something you can do though, if you're exhausted after a night of hard partying.”

The story of Rodelinda is based loosely on the history of the Lombards, a powerful migrant Germanic European people that invaded northern Italy in the late sixth century and ruled there for 200 years. In the opera, Bertarido (Scholl) is driven from the Milanese throne by the vain usurper, Duke Grimoaldo (tenor Joseph Kaiser), who keeps Rodelinda (Fleming) and her young son under house arrest. Roselinda believes her husband has been killed and is pressured into marrying the duke, but the exiled king has, in fact, survived and returns in disguise with the aid of his close friend and Man Friday, Unolfo.

Handel’s music is hypnotically beautiful and Fleming and the rest of the vocal cast invest their roles with depth of emotion. Their singing is flawless throughout. Collectively they provide one of the most dazzling displays of vocal artistry in recent memory. Its four hours long, but your attention won't drift for a moment. It's that engrossing. The Encore Performance Wednesday, January 4, 2012 at 6:30pm is truly a must-see, even if you've already viewed the original moviecast. For tickets and theatre information, visit www.FathomEvents.com and www.metopera.org.

Posted by Dwight the Connoisseur at 11:16 AM