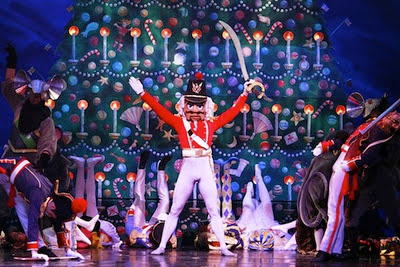 Robert Joffrey’s The Nutcracker, now underway at Chicago’s Auditorium Theatre through December 27, is the quintessential incarnation of the renowned Holiday staple, now celebrating 25 years. What sets it apart from the other myriad productions around the Chicagoland area, indeed, around the country, is the company’s meticulous attention to detail. Every eleve, pirouette, plie and arabesque is a monument to perfection, thanks to the leadership of Artistic Director Ashley Wheater, a Royal Ballet alum, hand-picked to helm the Joffrey by its co-founder, Gerald Arpino, in 2007. Under Wheater’s direction, he has brought in world-class choreographers to create new full-length works for the company and has worked diligently to hone the already exceptional skills of the company’s superlative dancers. The results, as evidenced by a recent performance of The Nutcracker, are nothing short of astonishing.

Robert Joffrey and Co-Founder Gerald Arpino set out to create a different kind of Nutcracker from the very beginning, jettisoning the traditional Victorian European setting and replacing it with a nostalgia-laden 19th century American one. The set was populated with toys and costumes that might be familiar to many from old family portraits. Today’s production retains the original choreography, costumes and sets, including the beloved giant Mother Ginger puppet by Kermit Love. An intermission interlude of Christmas Carols sung by the British School of Chicago Choir was the icing on the cake. If there are any little one’s (or even some big ones) in the family who have yet to experience this Holiday treasure, there are a handful of performances left to experience this wonder unfolding. Visit joffrey.org or ticketmaster.com for show times.

Posted by Dwight the Connoisseur at 5:58 PM