Broadway In Chicago: In The Heights, A Salsa-flavored reality check 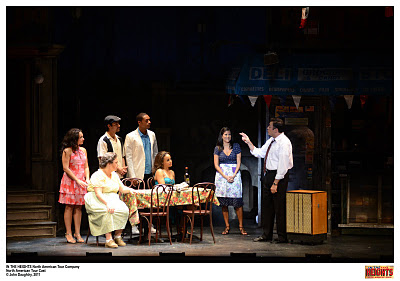 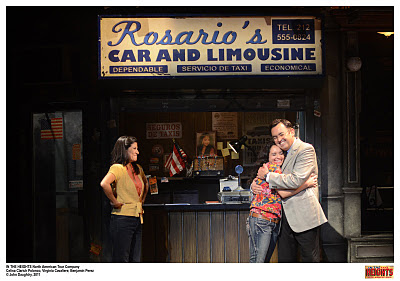 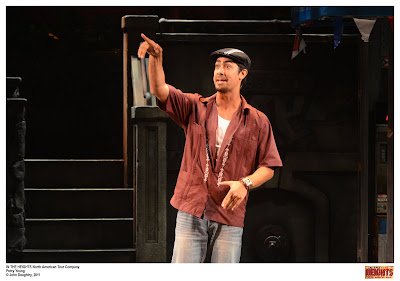 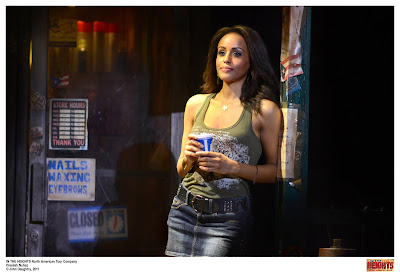 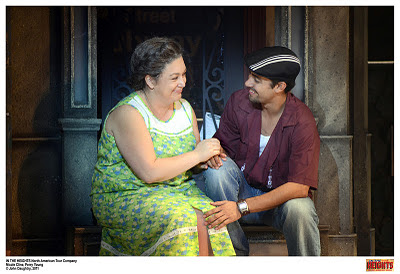 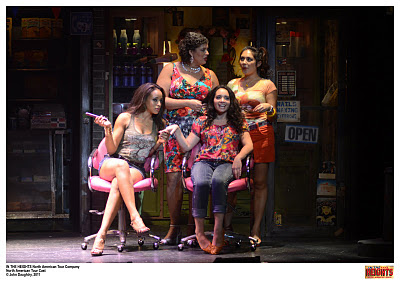 It’s a pity that Broadway In Chicago’s In The Heights will have its final performance in the Windy City this Sunday, Jan.15 at 6:30pm. The Salsa and Hip Hop flavored musical about the trials and tribulations of the largely Latino community in New York’s Washington Heights neighborhood is just the type of wide-eyed optimistic, emotional energy boost needed after the sugar-high euphoria of the New Year celebrations crashes into the emotional dungeon of hard, cold reality.

In The Heights swept the Tony Awards when it opened on Broadway in 2008 and also won the Grammy Award that same year for Best Musical Show Album. Watching the amicable, eager-to-please cast work up a sweat on the Oriental Theatre stage, it’s easy to see why. Even in a somewhat slimmed down touring version, it still packs an emotional wallop.

In The Heights tells the oversimplified story of mostly Puerto Rican and Dominican immigrants struggling to make a go of it in the tenements of Washington Heights, in Manhattan’s far north reaches near the George Washington Bridge. The look and feel of the show owes a lot to its Broadway predecessors West Side Story and RENT, but the plot line lacks the bite of both. The music and dancing, however, save the day and this outing’s hard-driving cast makes a point of delivering the poignant message behind the words and music.

Perry Young is a swaggering, hipster with a heart as Usnavi, the local Bodega owner who anchors the story and acts as its narrator. He’s no substitute for the original, Lin-Manuel Miranda, who wrote the music and lyrics and played the title role, but he makes a strong showing here. A fetching Virginia Cavaliere is the golden-voiced Nina, the only one in the neighborhood who ever made it to college. She finds herself ashamed after flunking out of Stanford. She’s embarrassed to tell her father, who worked so hard at the family's local jitney cabstand to make that dream possible. Their relationship is further complicated by the Romeo and Juliet-type romance develops between she and the company's African-American dispatcher, Benny (a fiery Kyle Carter), who romances her against her father’s wishes. There's racial and cultural tension as Nina's father declares to Benny, "you're not one of us!" an unkind cut, especially since the father had previously treated Benny as if he were his own son, bringing him into the business and making him a dispatcher, a position of honor. Benny does a semi-rap as he dispatches the cab company's fleet that is absolutely hilarious and one of the most imaginative stretches of alliteration in the entire musical. Shakespeare would have been proud.

One of the most touching scenes is the balcony scene, “Sunrise” at the start of Act II, which gives voice to the humble aspirations of the entire cast of characters. Christina Aranda is charming as the neighborhood matriarch Abuela (Grandmother) Claudia, who has secretly hit the lotto and has vowed to take care of everyone in the neighborhood with her winnings.

In The Heights presents a very simplified version of the struggles of immigrant Americans, trying to make it against the odds. But, hey, this isn’t Masterpiece Theatre. It’s a great evening out with a message; one that the ‘suits’ on Capitol Hill would do well to have a listen to. Maybe the In The Heights crew can take a swing by Kennedy Center in D.C. and send all of the members of Congress a free ticket!

Posted by Dwight the Connoisseur at 9:22 AM