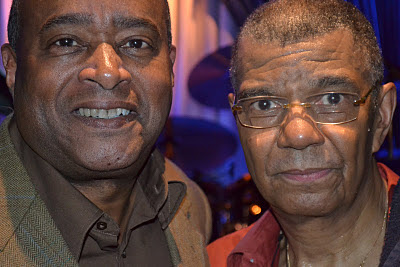 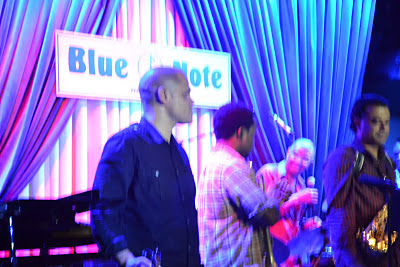 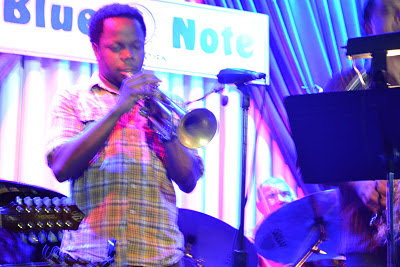 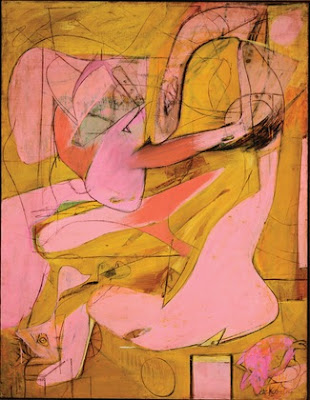 -Jack DeJohnette and sextet at the Blue Note

-A work by Willem de Kooning

New York—Grammy Award-winning jazz drummer Jack DeJohnette has a lot to celebrate as he embarks on the New Year of 2012. On this night, at the Blue Note, he’s the object of a 70th Birthday Celebration. He is also being honored in a concert at Jazz at Lincoln Center commemorating his being awarded the 2012 National Endowment for the Arts (NEA) Jazz Master Fellowship, the highest honor for any jazz musician.

“I guess I’ll be celebrating all year,” he told me post performance. “Unfortunately, my good friend Von Freeman (a fellow Chicagoan, who is 82 years young) is ill and can’t be here with me.” Fellow jazz veterans Sheila Jordan, Charlie Haden and Jimmy Owens will be on hand to help ring in the ‘year of Jack DeJohnette’ in grand jazz style at the Rose Theatre concert.

The NEA award is just the formal recognition of a career resume that speaks volumes; he was a significant component of the original Charles Lloyd Quartet and Miles Davis’s landmark fusion bands and albums of the ‘60s and ‘70s. He, in fact, joined Davis’s group in 1968, just in time for the groundbreaking album Bitches Brew. He’s a frequent collaborator with pianist Keith Jarrett. Tonight, he’s fronting his own Sextet, playing original compositions from his new CD, Sound Travels. Tonight’s performance is a prelude to what audiences will be hearing at the Newport and Monterey Jazz Festivals and on his European tour later this year.

Jack DeJohnette does with drumsticks what the artist Willem de Kooning did with paint brushes, creating vivid images composed of bold swatches of heightened tonal color and lyrical lines that morph across diverse cultural landscapes and disparate musical formats.

Tonight’s aggregate is very international in nature, and reflects the musical eclecticism of its leader. Each is an established composer in his own right and has his own share of accolades and honors to his credit. The depth and intensity of their collective performance provided a rare window into the inner workings of the creative process. Saxophonist Rudresh Mahanthappa, is of Indian descent, but was born in Trieste, Italy and raised in Boulder, Colorado. He is a Guggenheim Fellow and 2011 Downbeat International Critics Poll Alto Saxophonist of the Year whose music incorporates the fusion of South Asian and traditional jazz influences. Dave “Fuze” Fiuczynski is an iconoclastic and prolific American jazz-fusion guitarist, hailed by the world press for his inventive approach. On this occasion, he is playing the two-necked guitar. “The top one is a fretless keyboard,” he explained to me, “much like a violin. It allows me to slide up and down between the notes as they do in Middle Eastern music. It creates a sound not unlike what you might here in the market square in Marrakesh. Jack heard me playing at a wedding recently, and I was doing a lot of Mediterranean-type music. He approached me and said he wanted me here on the gig because, ‘that’s the music I’ve been hearing in my head. (Paraphrasing Jack) We’ve got to do that at the Blue Note!’”

Venezuelan Percussionist Luisito Quintero in regarded as one of the hottest timbaleros in New York’s tightly knit Latin music fraternity. Having heard him on two successive nights, accompanying Richard Bona’s Mandekan Cubano project at the Jazz Standard and then again at tonight’s Blue Note engagement with DeJohnette, the word on his fiery facility with Afro-Venezuelan rhythms has obviously gotten around.

Bass guitar Jerome Harris has won international acclaim for his penetrating and versatile style. Besides being a fluid bassist, he has also distinguished himself as a guitarist. His hauntingly plaintively vocals add a highly emotive subtext. “Salsa For Luisito” provided not only a workout for Quintero’s considerable Afro-Latin chops, but a vehicle for Harris’s expansive vocals.

Saxophonist Tim Ries embodies the words “fusion” and “crossover.” He has performed and toured extensively with The Rolling Stones. In, his latest CD is Stones World/The Rolling Stones Project II. Ries has written more than 100 compositions in both the jazz and classical idioms. His Verve release with the Joe Henderson Big Band won a Grammy Award. His blazing soprano sax solos, particularly on the Sound Travels cut, Tango Africain, made the case for his considerable prowess.

Among the standout moments of the evening, Alto sax solos by Rudresh Mahanthappa on One for Eric, in honor of reed shooting star Eric Dolphy and Soulful Ballad, DeJohnette’s “talking timpani” on Tango Africain and keyboardist George Colligan, and his intense, liquid melodic explorations.

Fireworks emanated from the finale, Sonny Light, a tribute to Sonny Rollins, who Jack and other NEA Masters played for at his recent coronation at the Kennedy Center Honors. “Sonny just lights up a room and brings joy,” DeJohnette said before launching into the tune. It was an explosive romp in the Sunny Isles of the Caribbean, with guest trumpeter Ambrose Akinmusire. A native of Oakland, California, he is the winner of the 2007 Thelonius Monk International Jazz Competition and the Carmine Caruso International Jazz Trumpet Solo Competition, two of the most prestigious jazz competitions in the world, makes him one of the hottest young trumpeters on the current jazz scene. His fiery intensity was reminiscent of a young Hugh Masekela combined with the sophisticated chops of a Dizzy Gillespie. This was truly a memorable evening of Modern Jazz at its best.

Jack DeJohnette was born in Chicago in 1942. The Blue Note engagement provide an opportunity for a happy reunion for this reviewer, who attended Englewood High School on the South Side of Chicago with a then aspiring pianist, who had dreams of leading his own band in New York City. From all accounts, it’s a dream fulfilled and beyond anyone’s wildest imagination!

Posted by Dwight the Connoisseur at 3:32 PM