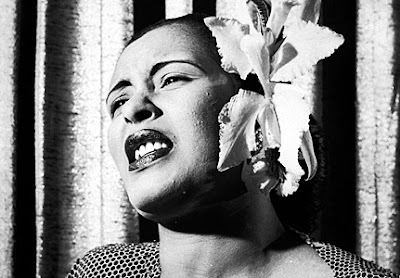 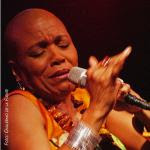 Chicago—A brown skinned, green sequin gowned hurricane swept across the Armour Stage of Chicago Symphony Center, like a thirty-mile an hour wind off nearby Lake Michigan. It was in the person of three time Grammy © Award winning singer (Dear Ella-2 categories, 1998, To Billie With Love, 2010) and Tony © Award winning actress (The Wiz, 1975) Dee Dee Bridgewater. Audience members at the SCP Jazz Series got a Deep Dish Pizza sized helping of both of those unique talents in her program TO BILLIE WITH LOVE: A CELEBRATION OF LADY DAY.

Billie Holiday sounded nothing like Dee Dee Bridgewater and vice versa, but, using her considerable vocal instrument and her mesmerizing chops as an actress, she was able to give flesh and blood to the spirit of her musical idol. “Hush Now, Don’t Explain” became an anthem to the sexual and emotional abuse suffered by many black women. She emboldened the phrase “and I know you CHEAT”, with all the venomous rage it deserved. Billie never sang it that way, but she probably felt it!

Dee Dee's artistry and that of her musicians elevated the music of Lady Day to its lofty surroundings. Her artistry and vocal prowess was as equal, in her genre, as that of Jessye Norman, in hers. Craig Handy’s soulful runs and modal flights of fancy on the flute brought to mind the great Yusef Lateef (2010 NEA Jazz Master Award, 1987 GRAMMY © Award for Yusef Lateef’s Little Symphony), while his trills and obbligatos were as precise and evocative as those of Jean Pierre Rampal. Pianist and musical director Edsel Gomez showed the strength of his chops with a dazzling display of two-fisted block chords in the manner of Fats Waller and Jay McShann on Bridgewater’s “N’Awlins” take on “Them There Eyes.” He quickly shifted gears and delivered gossamer arpeggios and intricate cascading runs that proved he was no stranger to the delicacies of Chopin and Debussy.

I’ve never seen a vocal artist stroke a bass during a performance as Bridgewater did as bassist Kenny Davis, a native Chicagoan, plied it with a bow during Holiday's Fine and Mellow. It almost made one want to close their eyes in order to give them some privacy. For a few moments, she let loose with a dead on vocal impression of Lady Day that let the audience know she could channel the great one at will. No need, Bridgewater’s vocal impressions and interpretations made the music and the lyrics come alive in a new and dynamic fashion that put a contemporary face on a voice silenced by a life too harsh for a soul that, unlike popular belief, was as delicate as the gardenia Lady Day often wore in her hair.

Posted by Dwight the Connoisseur at 7:09 PM