Guest Conductor Lionel Bringuier, a seasoned pro at only 26

NEW YORK--Although only 26 years old Guest Conductor Lionel Bringuier acquitted himself like an old old pro during his one-week subscription concert stint as Guest Conductor with the New York Philharmonic in a challenging and scintillating program of Paul Dukas's The Sorcerer's Apprentice,  Sergei Prokofiev's Violin Concerto No. 2, with Greek firebrand soloist Leonidas Kavakos, Aoltan Kodaly's Dances of Galanta and, finally, Igor Stravinsky's Suite from The Firebird, now celebrating the 103rd year of its debut as a performance piece with Serge Diaghilev's Ballets Russes at the Paris Opera in 1910.

In his youth, violin soloist Kavakos was similarly a "wunderkind," having won the Sibelius Competition in Helsinki at the tender age of 18 in 1985, as the competition's youngest contestant and a year later as winner of the Indianapolis International Violin Competition (Kavakos studied with the great Josef Gingold at Indiana University on an Onassis Foundation Scholarship), and, in 1988, winner of the Paganini Violin Competition.

Bringuier is Chief Conductor Designate of Zurich's prestigious Tonhalle Orchestra and will join it as Music Director in the upcoming 2014/15 season. He has already distinguished himself as Resident Conductor with the Los Angeles Philharmonic, now in his sixth and final season in that role.  Subscription concert attendees might have fond memories of his New York debut when he conducted the Mostly Mozart Festival Orchestra  at Avery Fisher Hall, in 2008 and his official debut with the New York Philharmonic in 2009, in which he conducted the chamber ensemble of Benjamin Britten;s "War Requiem" with Lorin Mazel at the podium.

This time, young Bringuier was firmly in the driver's seat, and a thrilling ride it was from start to finish!
The Sorcerer's Apprentice is forever emblazoned in the mind of us Baby Boomers (which comprised the greater part of the Friday afternoon matinee I attended) with the image of Mickey Mouse from the 1940 Disney film "Fantasia." Though himself diminutive in stature, Bringuier rose to the occasion, and like the "mouse that roared," propelled this time-honored work into the stratosphere with a spellbinding performance. Holding the reins in on both tempo and tone, he was able to build the sense of suspense to a fever pitch and conjured up images that were almost cinematic in their depth and scope. Seeking out inner voices and urging sprightly bursts of inspiration from the woodwinds and brass, he revealed brilliantly faceted gems of melody and tonal color lurking in the depths of the dense orchestrations.

Leonidas Kavakos is a veritable force of nature on the violin. The description may sound trite, but to witness the blurring facility of his piston-like fingering, the precise Formula One speed of his agility and  his breathtaking ability to scale to the very precipice of the musical and emotional acropolis, only to leap like a wing glider into the racing wind. At times, he rocked back and forth on the balls of his feet like a Wimbledon contender about to send an ace soaring over the net. Prokofiev composed the work for the exclusive performance of the great French-Belgian violinist Robert Soetens who premiered it with the Madrid Symphony Orchestra in 1935. It could not have been more explosively performed!

Fireworks was the dominant impression of Stravinsky's Firebird Suite. Put quite simply, with the exception of a flubbed entry by the tuba at the start of the all-too-crucial finale, it was an otherwise flawless performance, full drama and suspense, fiery dances and explosive crescendoes. Referring to his earlier piece in the program, Bringuier proved to be  a bit of a sorcerer in his own right. 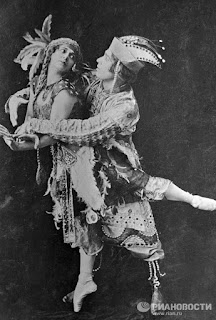 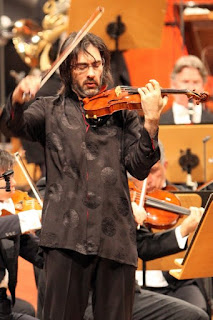 
Posted by Dwight the Connoisseur at 1:13 PM