NEW YORK-Fox Searchlight film's 12 Years a Slave is Steve McQueen's gripping retelling of the true story of Solomon Northup, who wrote a book about his 12 year odyssey from being a free man, living a middle class life in upstate New York, to being kidnapped and sold into slavery. Northup's  memoir was published to great fanfare and became a best seller just eight years before the start of the Civil War.  Now, 160 years later, his harrowing tale hits the big screen in a brilliantly imagined production by one of the world's most daring directors. British director Steve McQueen is best known for his stunning work in the stark film Hunger, which depicted hunger the strike-until-death by IRA activists in Northern Ireland. African actor Chiwete Ejiofor (Talk To Me) plays the role of Northup in a heart-rendering performance and Michael Fassbender, who played the sex-addicted misanthrope in McQueen's Shame, which premiered at the New York festival two years ago, plays Northup's sadistic, psychologically twisted owner and Brad Pitt, also one of the film's producers,  makes a cameo appearance as the Canadian abolitionist who befriends him and later hands him the key that will allow Northup passage back to his old life. Henry Louis gates, the renowned African American scholar, geneologist and author, served as consultant to the film.

Written by John Ridley (Red Tails), the film begins with Northup leading the ideal upper middle class life, playing his beloved antique violin after a hard,but fruitful day working at a resort hotel in Saratoga Springs, tucking his picture perfect son and daughter into bed, and making love to his beautiful wife in their silk and satin sheeted canopy bed. When Northup's wife heads off to work for several weeks for a wealthy white family some distance away, he is wiled away by some shysters posing as agents or a traveling circus who enlist his services as a violinist for a private show in Washington, D.C. "It's only for two weeks time," the one top hatted demon in disguise promises, "after which time you'll be whisked right back home." Northup takes the offer, thinking that not even his wife will be the wiser as he'll run off, make some quick cash, have an adventure and return home without her even knowing.

After drinking too much spiked wine at a formal celebratory dinner with the two hooligans, Northup finds himself awakening from a drunken stuper in the dungeon of Williams' Slave Pen off Seventh Street n the Nation's Capital, just within sight, as the camera deftly shows, of the U.S. Capitol Building.

The film is full of such cruel ironies. Northup is lent out to a neighboring plantation by his cruel owner, whose plantation, almost Biblically, is nearly wiped out by a plague of locusts. Northup's temporary owner is a kindly judge who takes a liking to him, even going out of his way to locate a violin for him to play. Northup etches the names of his wife and children next to its chin rest. This idyllic interlude ends quickly, however, and its back to the chaingang-like existence at Bayou Boeuf, Louisiana with its endless cotton fields and hideous swamps on Edward Epps' plantation,  from which no slave ever escaped with his life.

Along  the way, Northup is given some sage advice from one of his fellow formerly-free captives, "don't let them know you can read or write. Just keep your head down, keep your mouth shut and do what they tell you."

Northup befriends one of the slave girls who becomes the unwilling paramour of the slave master, who forces himself upon her in sadistic fashion. "The scene, as horrible as it was, was actually beautiful, in the way it was shot and the way it appears on the screen. You see this silhouette, which looks almost like one of those paintings, with the stark outline of her face, with its African features, and his profile, which is so distinctly Caucasian. It's a striking contrast that reflects the dichotomy of the tone throughout the film.

"In many ways, the story of Solomon Northup has almost a Grimm Fairy Tale quality about it. Here we have this protagonist  snatched from this idyllic world and thrown into this distorted and horrible alternate reality. It's almost like Alice In Wonderland seduced by the Mad Hatter and then thrown down the rabbit hole into this surreal distorted world, which for him, was slavery on this plantation. There are so many layers of reality colliding with this surreal experience that he can't even begin to come to grips with, based on the genteel life he'd become accustomed to."

12 Years a Slave opens everywhere October 18. It is a film that commands your immediate attention. 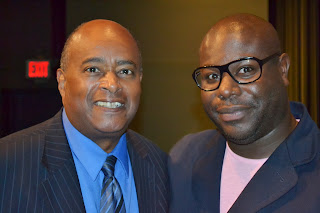 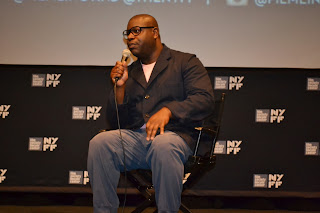 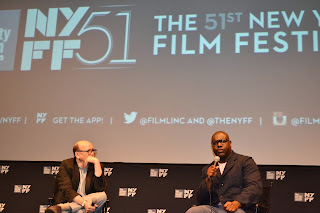 Posted by Dwight the Connoisseur at 1:47 PM