NEW YORK--On the heels of a triumphant world tour, the Orquesta Buena Vista Social Club completed its subsequent U.S. tour with a two-night stand at Jazz at Lincoln Center. With respectable representation of New York's sizeable Cuban-American population jamming the Rose Theatre, along with a smattering of devout fans of the Latin Grammy Award winning ensemble, the performance was more like a homecoming than your standard concert. With the audience on its feet for much of their performance of Cuban and Latin jazz favorites, it wasn't long before they were dancing in their seats and literally, in the aisles. The sheer fervor of the singers and the driving beat of the percussion and bright, inventive horn and guitar solos and vivid melodic lines, affirmed the band's identity as a Cuban national treasure.


Orquesta Buena Vista Social Slub arrived on the international stage a decade ago with an Oscar-nominated documentary by acclaimed director Wim Wenders and a Grammy-winning album that has sold millions. The Orquestra draws huge crowds wherever it performs and recently wowed critics with its newest incarnation at venues such as the Monterey Jazz Festival, Davis Symphony Hall in San Francisco and Symphony Center in Chicago. 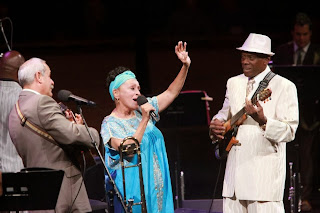 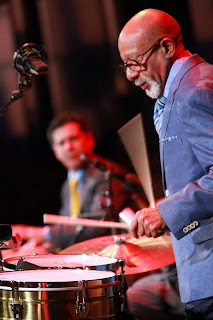 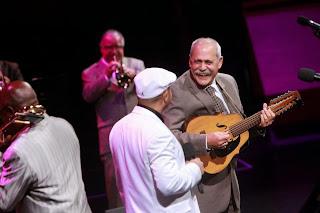 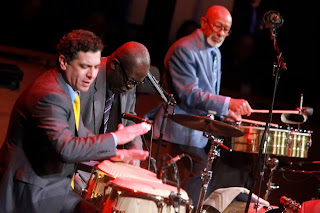 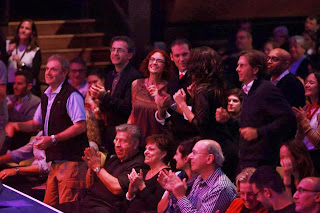 It was 2003 when the Cuban all-stars, then known as the Buena Vista Social Club arrived on United States stages in the wake of their unlikely and sudden fame. Sadly, the progression of time has taken away iconic founding members such as vocalist-guitarist Compay Segundo, vocalist Ibrahim Ferrer and pianist Ruben Gonzaliez. Fortunately, other founding-generation luminaries are still in place; 82 year old Omara Portuondo Pelaez (she'' be 83 October 29, Happy Birthday!!) reprises her earlier role as  lead singer. Prior to singing with the Buena Vista Social Club in its beginning years in the mid 1990's, she was a major star who has sung and danced with the likes of Nat King Cole and Chucho Valdes and is one of the original members of Cuba's fabled Cuarteto d'Aida. Gingerly led on stage by two smiling aides, all signs of infirmity disappeared when she launched into songs familiar to every Cuban in the house, many of whom sang along with gusto. These were the songs of their native land that had become almost anthems and a bitter-sweet reminder of the culture and sense of family many of them have left behind. Many sang and danced with abandon, reveling in the musical spell cast over them by the band. 72 year old Trumpeter Guajiro Mirabel is a founding member of the Buena Vista Social Club and was among the first musicians recruited by British producer Nick Gold to perform in the recording sessions that produced the multi-platinum album and groundbreaking concert documentary. Mirabel is a key figure in Cuban music and gave it his all for the Rose theatre concert. It's as if time has stood still for this highly energetic and innovative performer. Blistering trombone solos and heartfelt vocals from Trombonist and Musical Director Jesus Aguaje Ramos kept the lively pace going but the most arresting solos were those of Barbarito Torres on the mandolin shaped stringed instrument, the Laud, and its hanting tone and Guitarist-singer Eliades Ochoa who made a flashy entrance with his trademark cowbow hat and signature Paladin, "Have Gun Will Travel" black attire. Often called the Cuban Johnny Cash, his vocals on "El Cuarto de Tula" stole the show. After several encores, both the band and the audience danced through the exits after a transformative experience that turned the Rose theatre into a night in Old Havana. 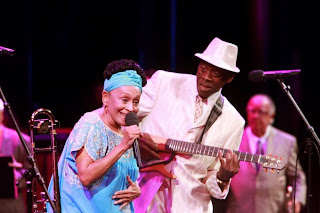