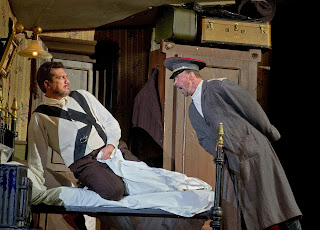 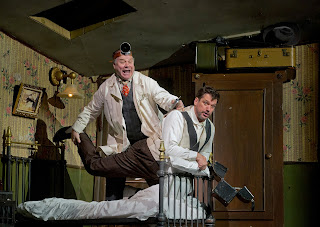 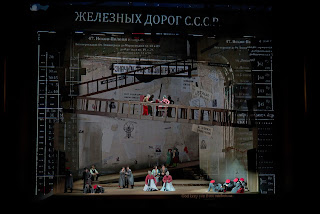 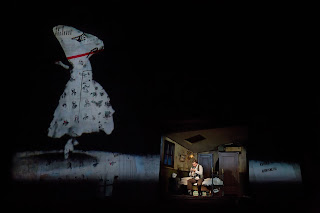 
NEW YORK--The Nose, based on short story of the same name by Russian satirical writer  Nikolai Gogol , is presented in a dazzling, multi-media revival production at the Metropolitan Opera House. With music by Russian composer Dmitri Shostakovich and sets and multi-media conception by South African visual artist William Kentridge, utilizes multi-level staging, film and  video projection as well as imaginative costumes to create an all-encompassing visual and dramatic experience. Using what he calls "brutal humor," Kentridge uses the stage to project the central theme of  The Nose as a satire on the absurdity of modern society, its bureaucracies and hypocrisies.

Polish-Brazilian operatic baritone Paulo Szot reprises his role as the hapless low-level St. Petersburg bureaucrat, Kovalyov,  who awakens one morning to find that his nose, severed by a drunken town barber, has suddenly run away to claim its own life as a higher level Soviet official. Conducted with a firm, but occassionally lilting touch by Russian conductor Pavel Smelkov, who shares podium duties during the opera's run through December 12 with Met favorite Valery Gergiev, who led the Met Premiere of The Nose in 2010, the opera achieves its goal if injecting humor into an otherwise look at society in a police state. Russian actor Andrey Popov is the Police Inspector, in a Groucho Marx inspired comic performance. British musical theatre actor Alexander Lewis, a graduate of the Met's Lindeman Yong Artist Development Program, cavorts across the stage in oversized costume, designed by Kentridge with Sabine Theunissen, as The Nose. Met soprano Patricia Racette served as the amicable Live in HD Host.

Having seen both the premiere live from the stage of the Metropolitan Opera and experiencing it Live in HD, which was transmitted to more than 1,950 movie theaters in 64 countries worldwide, it can be said that, in this case, the Live HD incarnation was the far superior of the two experiences. With so much going on both dramatically and visually on the Met stage, it was difficult to keep up with the fast-paced action while trying to read projected subtitles at the bottom of each wing of the stage. It was even more difficult to navigate viewing the translated libretto from the tiny screens on the backs of the audience seats while at the same time, retaining visual contact with the action on stage. It was all happening much to fast to make any sense of it! Met Live HD, with its neat, compact subtitles in bold white text placed strategically in the lower center of the screen, allowed the audience to retain visual contact with the performance while at the simultaneously reading the English translation of the Russian text.

William Kentridge spoke with Met General Manager Peter Gelb on camera during the Met Live HD intermission. "The great Russian playwright and aiuthor Anton Chekhov once described "The Nose" as the greatest short story ever written," he told Gelb while relaxing backstage during rehearsals. "The story is very simple, but it raises some complex questions about the heights of absurdity and contradiction we all face in modern society. The story itself was conceived at the very outset of modernism. Shostakovich's score with its dramatic bursts, further underlines the brutal satire of the story."

Dramatic tension and a good deal of wry comedy are created as the story quickly unfolds. "The story follows collegiate assessor Kovalyov has he goes on the absurd journey of trying to track down his nose, only to discover, to his horror, that his nose is now at  a higher bureaucratic rank than he is, and his nose refuses to speak to him." We see the nose in rear screen projection riding regally on a militarty horse, that disintegrates and reconstitutes itself at various times, hinting at the breakdown and erratic fluidity of modern society. The Stalinesque Police Inspector appears, first on a scaffold high above the stage, issuing edicts and warnings to the assembled teeming masses below. The Nose wanders through it all, delighting in its newly found privilege and independence, even appearing at one point, in the guise of the famed Russian dancer Anna Pavlova.  "So its really about what constitutes a person; how singular we are, yet how divided we are against ourselves.

"It's also about the tyranny of hierarchy. The set itself also exists as a huge screen for visual projection. At times the focus of the lighting is on the action and the singers and actors onstage, and then at times they're obliterated and are lost inside a huge projection, so that sense of things that seem solid becoming suddenly evanescent is a them that I'm very interest in." 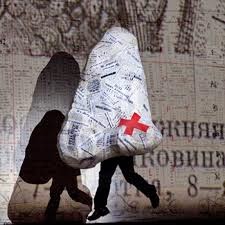 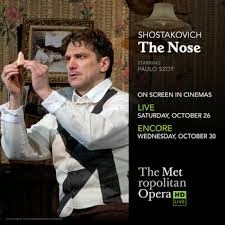 Posted by Dwight the Connoisseur at 5:59 AM