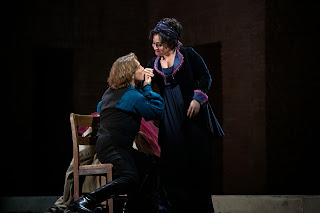 Roberto Alagna and Patricia Racette in the title roles 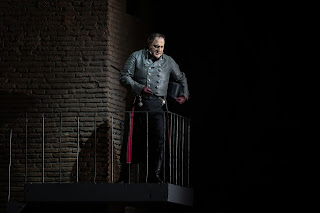 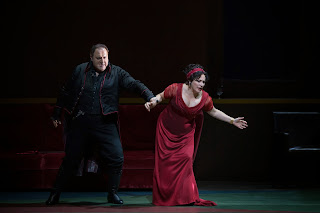 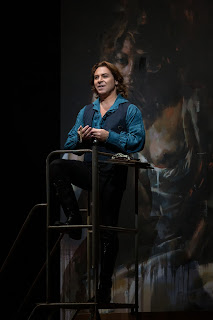 Roberto Alagna as the painter and rebel sympathizer Mario Cavarodossi

With humongous sets and a dark, grim production by Luc Nondy, Racette gives a passionate performance as the love-struck diva Floria Tosca. The object of her affection is the painter and the painter and revolutionary sympathizer Mario Cavaradossi, sung with dramatic flair by Met favorite Roberto Alagna. Bass-baritone George Gagnidze is deliciously evil as the smarmy villain Baron Scarpia.

Suffice to say that the pllot and the tragic ending come as no surprise. Indeed, many in the audience were humming along to Puccini's famous arias. Scarpia is chilling as he sings the aria "Va Tosca," at the end of Act One, when he declares "Iago had a handkerchief, I have a fan," referring to the famous plot of Othello, in which the title character is driven to murder his wife in a jealous rage fanned by a misplaced handerchief. Who cannot help but be moved by Tosca's emotional Vise d'Arte or Cavaradossi's "E lucevan le stelle," in the Final Act. Alagna, in particular, infused his character with an air of authenticity. "After all, he is half French, half Italian, just as I am," he declared to Met Live interviewer and Met diva Renee Fleming. "He is!" he said of the character. His mother is French!" and proceeded to give salutations to the global  Live HD audience kin both French and Italian to underscore his point.

Opening the Second Act is the scene where Scarpia is amusing himself with a collection of female "escorts. Seen in the virtual altogether in previous productions, they were swathed in feather boas and flowing shawls in this Live HD production. Tosca, who is subsequently lured to Scarpia's den and forced to witness the arrest and torture of her lover, Cavaradossi, is driven to murder the scheming Scarpia with his own steak knife after pretending to be seduced by him. The murder sets off the tragic string of events that followed, fueled by her mislaid trust in the word of an avowed snake, Scarpia, that she and Cavardossi will be allowed to go free after a mock execution.

Tosca will be seen in Encore Performance in theatres across the country Wednesday evening at 6:30pm local time. Check local listings for locations or visit metopera.org or fathomevents.com.
Posted by Dwight the Connoisseur at 9:04 AM