"The Invisible Woman" at the New York Film Festival

NEW YORK--Charles Dickens is best known as the author of "A Christmas Carol," which will soon be staged around the world by local theatre companies and shown in both black and white and color film versions from this and the last century, especially as the Christmas Holidays approach. From outward appearances, his is an avuncular, iconic figure that embodies the intellect and morality of pre-Victorian England. That soft-focus, idealized version of his personal history is completely cast aside in Fienne's latest directorial and starring effort, "The Invisible Woman," which shows Dickens to be a conflicted, complex man with a dark, troubled side. Coincidentally, he was a philanderer who all but cast aside his dutiful wife Catherine to pursue a year's long secret affair with a wanna be teenaged actress Nelly Ternan. Cumulative accounts of the story, culled from personal letters written by Dickens and his emotionally bruised wife and accounts from friends and associates, was the basis for the brilliant screenplay. Adapted by Screenwriter Abi Morgan from a biography, "Nelly Ternan" by Claire Tomalin, the film portrays the story of Dicken's illicit relationship with Nelly Ternan, played skillfully by Felicity Jones, as a complex woman whose aspirations are totally out of step with the society in which she lives. Nelly has ambitions to be a great actress. Dickens has the ambition to get in her drawers. He even has the audacity to ask her mother, in so many veiled terms, for permission to do so. The vague promise of a career is enough to convince mom that, maybe 'an arrangement' isn't such a bad idea since there are few opportunities for women without a male sponsor and Dickens, with all his fame, prestige and fortune, can certainly offer her a secure life, even in the context of a clandestine affair, that going it on her own could not. Such was the lot of women in the 19th century.

In the time of his greatest literary success (Oliver Twist, The Life and Adventures of Nickleby,  A Christmas Carol), which was the mid 19th century( the 1830s-1850s. Dickens died in 1870.) Dickens enjoyed a level of celebrity that is more akin to what is experienced today than anything in his time. His books sold in the thousands and in several countries, at a time when there was no Amazon.com. His public readings of his works were sold out months in advance. He lectured and traveled extensively, making two speaking trips to America, at a time when that was no mean feat. In his public appearances, he not only performed readings of his works, but he also spoke out against the institution of slavery and offered solutions to the problem. His sell-out performances were perhaps the first to introduce ticket scalpers to the public lexicon. They routinely gathered outside his events, selling tickets at far above their face value to willing participants. Dickens later wrote of his American experience in his memoirs, entitled "American Notes."  "They flock around me as if I were an idol," he wrote. In his notes, he seemed to at first,  revel in the experience, but later, complained of the invasion of his privacy and criticized what he viewed as American gregariousness and crude habits.

The film also casts Nelly's torment within the contemporary context of the struggles women faced in Victorian England. "The reality is that women were almost entirely dependent on the earnings of men. "Mrs Ternan, the mother, tacitly allows this relationship to happen," Fiennes said. "What's she going to do? She risks social ostracisiation for her daughter, but the security and the benefits of support of Dickens perhaps outweigh the risk of breaking the taboo." Kristin Scott Thomas plays Nelly's apprehensive, but practical-minded mother. who finally acquiesces.

Fiennes appeared at the New York Film Festival news conference with Joanna Scanlan, who portrays Dicken's wife Catherine, who is all but discarded after bearing Dickens ten children. One of the most emotionally charged scenes in the film is one that occurs midway through, when Dickens forces her to return a ring he had specially made for Nelly, but which was mistakenly delivered by the jeweler to the Mrs. Catherine Dickens is obviously humiliated. but resigns herself to the situation and manages to present the ring to Nelly with a sense of dignity and grace in the face of obvious emotional defeat.

According to Fiennes, there's historical evidence that Dickens may have fathered not just one, but possibly two illegitimate children as the result of his illicit liaison. "Charles Dickens absolutely had a child with Nelly Ternan," Fiennes affirmed.

Originally, Fiennes said, he had sought another actor to protray Dickens, when he was first handed the project by the BBC. "But things fell through and the more I read about Dickens, the more intrigued I became about the complexities of this man and decided I wanted to portray him myself."

What was it like directing himself as an actor? Fiennes was blunt, but in a self-deprecating humorous way. "Ralph Fiennes the actor can be extremely difficult, walking off the set and all. So can Ralph Fiennes the director. He can be pretty tough to deal with too!"

Dickens could run, but he couldn't hide from his deception, especially in his writing 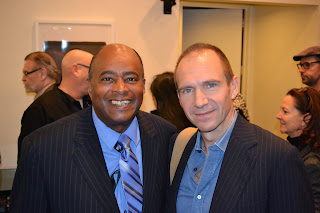 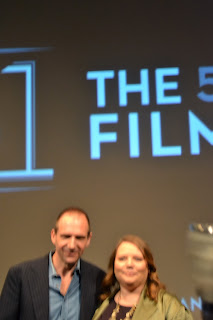 Ralph Fiennes with co-star Joanna Scanlan at the news conference 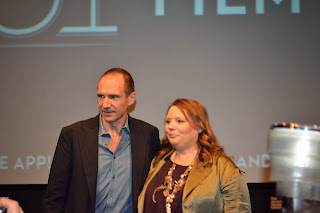 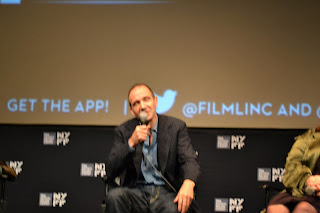 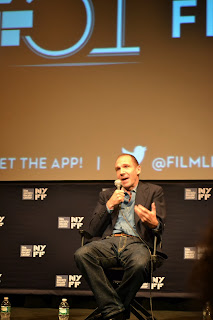 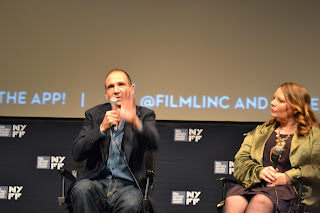 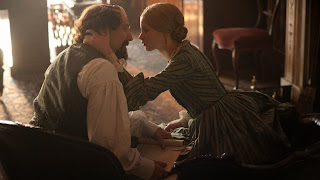 . Fiennes claims that, while Dickens kept their involvement under wraps, there were clearly acknowledgements, even inspiration for characters and situations, that were revealed in his writing. "Great Expectations" was clearly written at a time when we know he was involved with Ellen Ternan. It's even to the extent to which you can clearly identify elements of Nelly in the female characters he writes, especially in his later books," Fiennes told a post screening news conference at the New York Film Festival."I actually feel his writing of female characters got much better after his involvement with Nelly."

"The Invisible Woman" reveals Dickens to be a flawed British national treasure. The fact that Dickens carried on the affair with the much-younger teenaged actress is clear evidence of the severe gap that existed between Dickens the writer and public figure and Dickens the man. "Dickens was tormented. He had huge extremes of emotion. We tend to get the sort of Christmas card image of Dickens-this smiling, jolly father-figure, but clearly, when you read more about him you find that he was a very disturbed man; a man in mental and emotional anguish," Fiennes said.
Posted by Dwight the Connoisseur at 1:47 PM