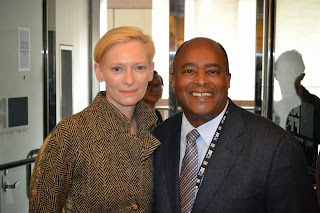 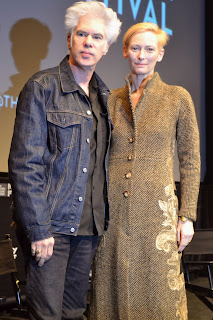 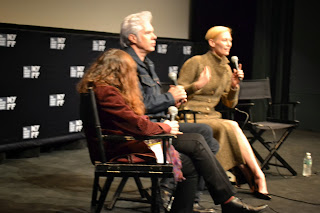 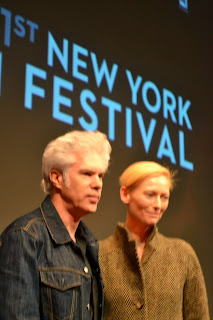 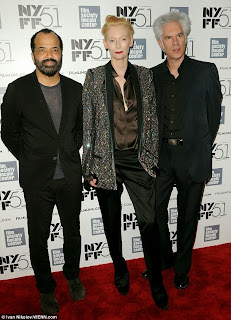 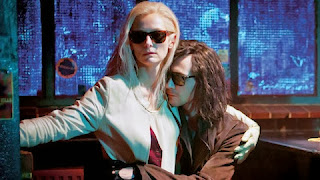 NEW YORK--It took a self-indulgent director like Jim Jarmusch to lift the vampire movie genre out of its cliched past and bring it firmly into a modern context with his rather tongue-in-cheek look at vampire love, Sony Classic Picture's "Only Lovers Left Alive," which received its U.S. Premiere at the 51st New York Film Festival.

An award-winning director (Grand Prix, 2005 Cannes Film Festival for Broken Flowers with Bill Murray in the title role), Jarmusch both wrote and directed this stylish, moody look at vampire life and love in the indie-Rock, underground scene.  Shot in both the urban decay of present-day Detroit and the seedy back-alleys of Tangier, Jarmusch shows, on the surface, how two locales that would seem so dissimilar due to their distance, can project the same atmosphere of timeless desecration. In the same way, he shows how the relationship between the vampire lovers Adam and Eve, played by Tilda Swinton and Tom Hiddleston, remains constant, even though they've been married for nearly a century and a half, and have spent much of that time living apart.

The film begins in Adam's grungy, back-alley apartment in one of the seediest parts of Detroit. A vintage record player spins an old R & B classic 45, and that pretty much sets the tone for the rest of the movie. Eve hurries home from nights of swilling top-shelf blood in a Tangiers flat to ease her troubled husband's ennui. Their nights are filled with love-making and partaking of their drug-of-choice, in this case O-negative blood ("the good stuff," they call it, in a veiled drug-culture reference), which they obtain from a crooked doctor at the local clinic, comically named Dr. Watson.  Jeffrey Wright, a fine actor, with numerous awards to his credit, is wasted in this almost cartoonish cameo appearance.

The film manages to poke fun at itself as it pokes along with moody, dimly lit shots and a terrific sound track that will thoroughly delight fans of vintage Soul music and R & B. You won't hear the 'best of Motown' anywhere in this sound track. These vampires only dig the songs that you would have heard on 'race music' stations in the early 1960s in ghetto urban America. For this quality alone, I applaud Jarmusch's sense of style and effect. As far as I'm concerned, any movie soundtrack that juxtaposes Wanda Jackson's soulful, explosive hit "Trapped By a Thing Called Love," (played during  a really sexy slow-dance scene by Adam and Eve straight out of those "red light" basement parties of yore) and Paganini's Caprice No. 5, is a must-have in my CD collection!

There's plenty of blood-swilling, but only from crystal sherry glasses ("neck-sucking is so fucking 15th century!" Eve declares) and the only hint of violent neck-sucking comes when Eve's younger sister Ava, played by Mia Wasikowska, in a free-wheeling comedic performance) shows up to upset the couple's serene apple-cart after 87 years by trashing their apartment and Adam's vintage guitar collection and totally devouring his beloved underground connection to the vintage instruments and recording equipment he covets. We get the sense that Adam is uncomfortable in his modern day skin and the techno trappings of the modern world. He embodies the guts of his computer in the shell of an old floor-cabinet 50s styled TV and fills his apartment with contraptions from the recording studios of a bygone era.  There's a standoff with some vampires early on in the film, but Jarmusch dismisses the urge to break out into a blood-bath that would have completely ruined the mood of the film. John Hurt (a Jarmusch alum Jarmusch's 1995 dead Men with Johnny Depp) makes a cameo as a seemingly drug-addled 500 year old Christopher Marlowe, who dismisses Shakespeare as "an illiterate philistine." I guess now we know who really wrote all those great masterpieces!

"Obviously, it's not a horror movie," Jarmusch said of the film at the festival news conference. "It's just a little character study, an overview that shows a love story that spans that amount of time and shows their perception of history over that long period of time. It was really interactive to me and that was what drew me to it."

"Only Lovers Left Alive" is currently making the rounds of film festivals around the globe. It opens in Italy, November 27 at the Torino Film Festival and then begins release in Germany, Sweden and Japan in December. No date has been set as of yet by Sony Pictures Classics for a U.S. theatrical release in 2014.
Posted by Dwight the Connoisseur at 6:33 AM