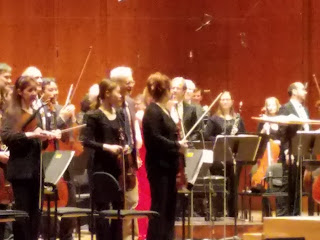 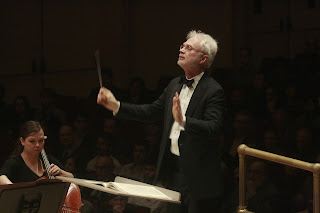 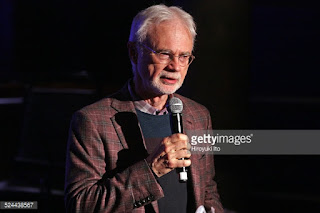 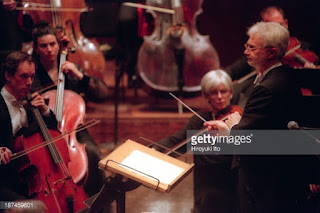 NEW YORK--Composer John Adams gave a virtual Master Class at the New York Philharmonic's recent regular subscription program of his Absolute Jest for String Quartet and Orchestra, which featured the New York Philharmonic String Quartet, comprised of four Principal musicians from the Orchestra, in their orchestra debut as a solo ensemble. He opened the concert by taking center stage to make remarks before Music Director Alan Gilbert conducted the performance, which marked the work's Philharmonic premiere.

"This is coming full circle for me," the composer began. "I can recall playing clarinet in a concert marking the 70th birthday of my favorite composer, Aaron Copland. Now its my own turn to have my compositions presented by this great orchestra which is celebrating my 70th birthday this season."

The composer went on to explain how the work, Absolute Jest. is a takeoff on the later string quartets composed by Beethoven. He then had the New York Philharmonic String Quartet play excerpts from  the Beethoven, and spoke of the parallels between the two. "What we hear in the Beethoven is the element of emphasis, which was new at the time. I took that emphasis and filtered it through the 'black box' of my own modernist, minimalist compositional style and arrived at Absolute Jest. I'll let you rock out on the New York Philharmonic playing it," he joked to the audience.

What followed was a dramatic, cacophonous piece of music with a continuous, pulsing percussion, and a series of bouncing lines from the string quartet, that Adams characterized as "lie a rabbit, or a hare, leap with great alacrity." The piece contains a number of musical 'jokes' and humorous, melodic winks to the works of Beethoven and others. Its a delight to the ears and one which commands the listeners attention from beginning to end. There are no dull moments, not even in the brief blow movement, which is layered with textures of sound and melody from both the orchestra and the string quartet.

Harmonielehre is a similarly orchestrally complex and interesting piece of music, with added dynamics from a specially tuned piano, two harps, cowbells, xylophone, chimes, sizzle cymbals, celeste, crash cymbals, tam-tams and celeste. Its a parody of a piece that with explosive energy and bright tonal colors. The overall impact is satisfying on so many levels and made for one of the most vibrant concerts of the current season.


Posted by Dwight the Connoisseur at 6:14 AM